We sent our apprentice Rebecca Tuffin to Britain’s most haunted village but it wasn’t the ghosts and ghouls who gave her a rather chilly reception – it was the residents.

In true spirit of the spooky season, I thought I’d pay a visit to Pluckley – the village famed for its many ghosts and supernatural happenings – curious as to whether there is any truth behind the stories.

I was half expecting to be overcome with a sense of impending doom as I weaved between the old houses looking for somewhere to park – but nothing seemed particularly odd.

First stop – the butchers. As I walked through the traditional silver chain mail draped over the doorway, I entered what seemed like the perfect setting for a grizzly tale, with a large slab of meat on the wooden bench behind the counter, and the scent of raw flesh in the air.

A man in a striped apron appeared, greeting me with a smile.

My next encounter with a man who has lived in the village since he was a child was equally as brief.

He assured me it’s all made up and he’s never experienced anything out of the ordinary.

He added: “As kids, we did used to put bags on string, hide in the bushes and pull them away when someone tried to pick them up, but that’s as far as it went.”

Another, who claimed his house has been egged in the past, said: “It’s not just Halloween we get it, kids come up here in the whole week leading up to it.”

He seemed pretty angry about the whole situation.

An elderly woman I stopped by the churchyard explained how she was getting rather sick of the continuous visits from excitable ghost hunters and Halloween revellers.

She added: “It’s a nice village and these stories ruin it and give us hassle we don’t need.”

Walking past the corner shop, I met a slightly younger woman, but yet again she agreed it’s all just silliness and kids messing about.

When asked where the stories come from, she said: “It’s an old village, it’s a prime target.

“People let their imagination run wild and we are left having to deal with the reality of it.”

In the hope for something more, I ran after a group of men I spotted who looked to be in their early 20s, hoping perhaps the youngest residents were a little more invested in upholding Pluckley’s title of most haunted village but to no avail – they weren’t from the area and said they had no idea what I was talking about.

Julie Halliday, who has worked in The Black Horse pub for 14 years, was the only person I met who upheld any belief in the tales. 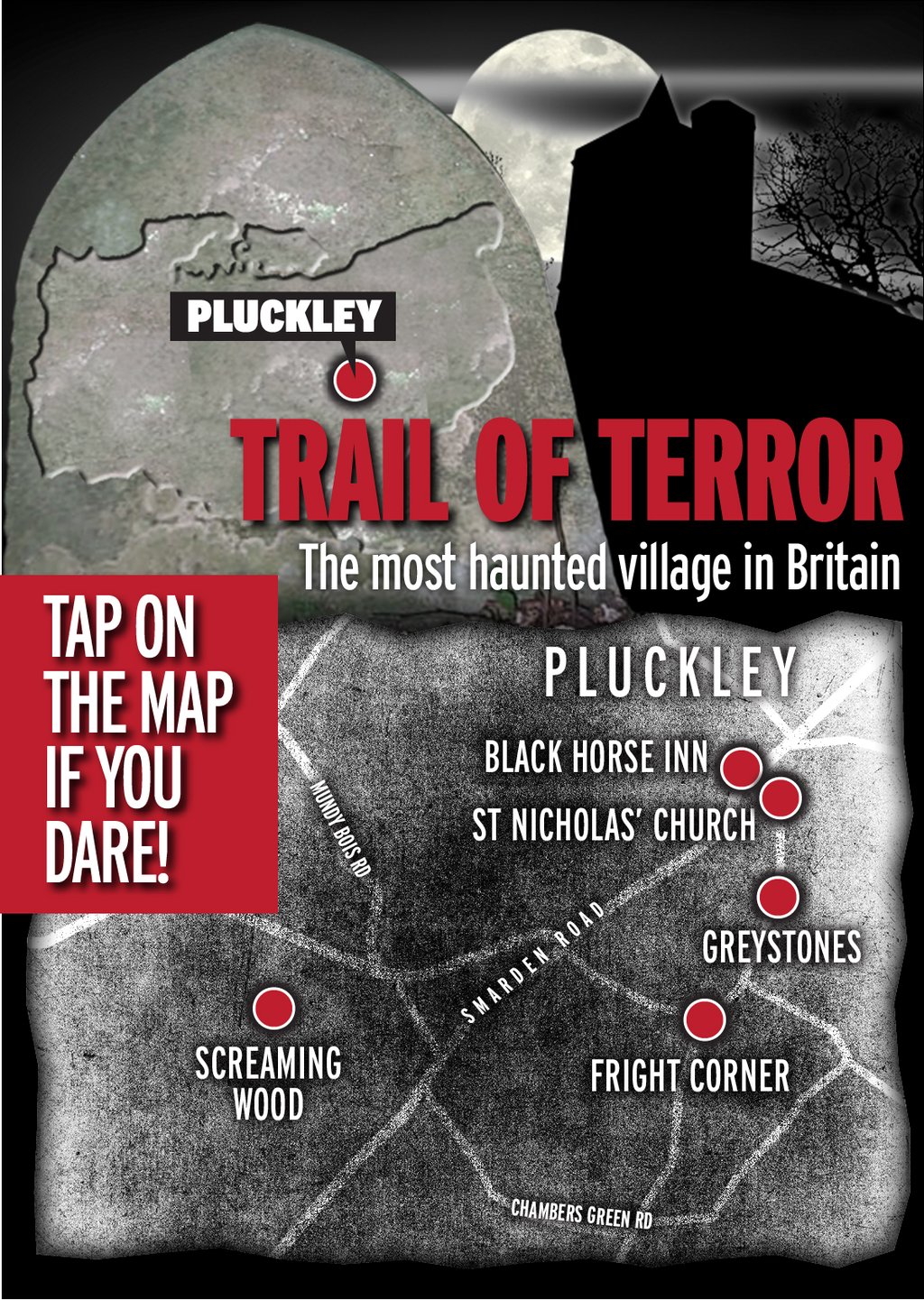 She told me of one particular spirit – a young girl called Elizabeth who was plastered into the pub walls by her evil nanny.

“A lot of people say their hair gets pulled – a medium told us it’s because she gets bored and mischievous,” she said.

“I used to leave a doll for her but since we’ve had new owners and different staff over the years the doll has been removed and she plays up.

“I believe in the stories and have seen things myself – too many things have happened over the years for it not to be true.”

Two others, George Anthony of Cass Convenience Store, and Liz Wyndham who lives in The Street, have not experienced anything themselves but had spooky stories from friends and relatives.

Liz’s young niece once “sat up in bed and pointing at a pretty lady who wasn’t there” and the previous occupants of the corner shop spoke of hearing footsteps – but once again, nobody was there.

Both laughed when I asked if they believed any of it.

I had now been in the village for a good hour and, with darkness approaching, I thought I’d finish my quest by visiting some of the haunted hot spots including Greystones, Fright Corner and St Nicholas’ Church.

With each I visited, I began to get a little more spooked – I wasn’t quite brave enough to venture into the Screaming Woods alone.

I pulled into a farm to turn around and felt a sense of dread when faced with the huge empty barns.

I quickly drove away and soon after spotted a little smiley scarecrow propped up inside a shack-like bus stop.

By this point my petrol was running low, it was pitch black and fear had outweighed my desire to get out of my car for any more snaps, so I set off home.

Once back in the safety of my kitchen, I concluded it’s most likely the majority of the residents are right – the tales of ghosts and supernatural happenings are all just made up.

But there is a tiny part of me which questions whether they could all be hiding the truth and terrified themselves.

Surely the stories can’t have just come from nothing?

Read more: All the latest news from Ashford