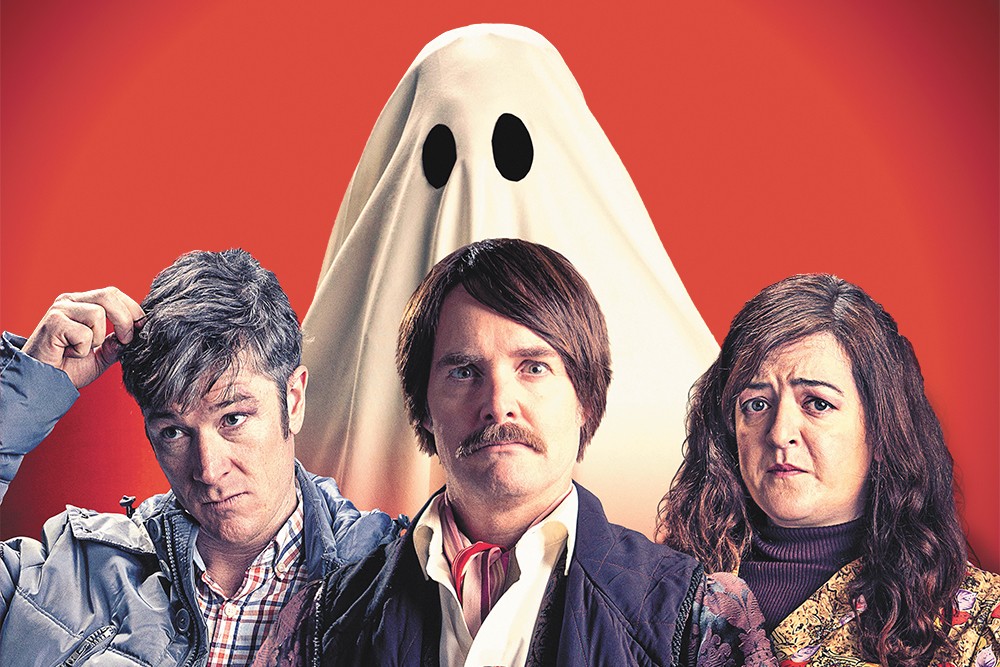 Ever since Ghostbusters, the go-to tactic for supernatural comedy is to show characters experiencing remarkable, seemingly impossible things and yet reacting with the kind of mild bemusement you get watching someone successfully parallel park. In the world of the Irish farce Extra Ordinary, the existence of spirits and demons and portals into the underworld is accepted as fact, and being possessed is a mild inconvenience.

The film stars TV comedian Maeve Higgins as Rose, a good-natured but socially awkward driving instructor whose late father was a spiritual medium and the host of a popular paranormal TV show. She tries to downplay the fact that she inherited some of his abilities — they were basically a ghostbusting duo, exterminating spirits around their working-class neighborhood — especially since she feels responsible for the freak accident involving a haunted pothole and a garbage truck that killed him.

One afternoon, Rose gets a call from a widower named Martin Martin (Barry Ward), who pretends he needs a driving lesson but actually needs an exorcist. It turns out his wife’s ghost is still haunting his flat, though she’s a rather benevolent spirit, leaving helpful household reminders in the steam on the bathroom mirror and throwing away unhealthy food before anyone can eat it.

Rose begrudgingly agrees to assist him — it helps that they’re clearly attracted to each other — and they become a paranormal investigation team, answering calls about possessed garbage bins, deep fryers and a taxidermied deer head, as well as the strange case of a dead grandmother’s face appearing in a mold pattern. The process goes like this: The spirits use Martin as a vessel so they can vocalize their final missives, he vomits up some viscous goo and the ghosts are finally allowed some peace.

“Taking a ghost into your body and puking up its ectoplasm really takes it out of you,” Martin casually observes.

We’re also introduced to prog-rock musician Christian Winter (Will Forte, looking like a forgotten member of the band Kansas), who has moved into a nearby castle to record his latest album. He’s on course to becoming a one-hit wonder and has decided that the only way to reinvigorate his career is to sacrifice a virgin to the devil. Naturally.

Extra Ordinary is the kind of movie that inspires comparisons to a lot of other movies. Its tone is reminiscent of Edgar Wright’s genre-bending comedies, though it doesn’t quite nail his snappy visual style, nor does it sustain its central joke as successfully as Taika Waititi’s What We Do in the Shadows, which took a similarly droll approach to the supernatural. The film’s deliberate anachronisms — it seems to be set in present day, but everyone drives outdated cars and uses Nokia cell phones — recall the films of Jared and Jerusha Hess (Napoleon Dynamite). It also makes direct shoutouts to The Exorcist, Ghostbusters and even that old tabloid-show clip of the old woman and her demonic toaster.

This movie isn’t a nonstop laugh riot by any means, but it has charm (especially from Higgins, who has the same bumbling appeal as Kristen Wiig), imagination and some unexpected moments of bloody horror. It also ratchets up to a wild finale that features a summoned demon, a supernatural ménage à trois, an unexpected childbirth and the most opportune Chinese food delivery in movie history. That’s almost worth the price of admission alone. ♦