Corona California – April 11th, 2020 5:30AM Saturday
I was taking my dog out for her morning duties when I notice something orange in the sky approaching from the south east direction. At first I thought it was a small plane since there is a nearby local airport in the town. However, as I waited I noticed the orange light was not making a sound. I used my frame of reference by first noticing the light moving through the tree branches. It was moving slowly from branch to branch, that was my first indicator that it was moving. I then stopped moving to listen for any sound coming from ‘an engine’of the orange object but I did not hear any engine sound in the distance. It was then I quickly ran inside and grabbed my cell phone and began recording.
As I began to record, the orange object stopped and slowly began moving north. I could see it by my naked eye but on my cellphone camera kept trying to adjust the image. I swear on everything I hold dear…this thing stopped moving and was below the clouds. It could not be a planet or star but I could be wrong. After 5 minutes it disappeared.
For the recorded, I served over ten years in the US Army and I have been in a war zone. I have seen satellites, rockets, and drones…I have never seen anything like this. Plus, I HAVE NEVER SEEN A UFO IN MY ENTIRE LIFE….except what I saw that morning.
I will email you my video from email if I can…it is 4m and 11sec long.Be advise…most of the clear video starts at minute 1:55.
Again…it could be a planet…but I knew what I saw.

Tilden, Nebraska – APRIL10 10 P.M.
I was in my backyard at 305 s. Elk street and while facing southwest I saw several bright lights [a total of over 25] moving in various directions. [not all at one time but in a fairly small area] about 60 degrees off the west horizon and could see them until they were 80 degrees off east horizon, then suddenly I noticed one after another traveling from northwest to southeast. There were no flashing lights or sound & there was just a trace of wind. I counted 13 in a row about 10 seconds apart. One would appear and disappear then another would follow. They were moving too fast to be airplanes. First I thought they were satellites until we saw them come across one after another. My neighbors- alex and emily were also in their back yard at the time and they witnessed 8 or 9 after I called to them. Sorry no photos.

Umtuntweni beach, Kwa Zulu Natal, South Africa – April 2020
I took this photo off the sea, when l took it there was nothing on the horizon, when l look later there was this black spot on the photo. First l thought the lens was dirty, or something on the windscreen.
Can not enlarge properly to see wat it was. Maybe you can help in this regard, as you have more experience in things like this.

Alameda, ca. – March 26th 2020
I saw 6 objects coming out of the western sky with Orions belt as the background. This was on 3-26-20 at approx. 8:20 pm. The first one I saw was bright and moving fast, thought it might be a satalite, but then a second one came out of the same area, and a 3rd, 4th, 5th, and 6th. They were moving from West to East following each other at equal distance, and speed. Took about 40 seconds for them to clear . I don’t know what they were, but do know they were in space above the Earth. Any ideas out there?

New Smyrna Beach Florida – June 2017
Cigar shape photo was taken from the Motel balcony we were staying at. My wife took it during or after a thunder storm that day.

Winchester. U. K. – September 2006
Flat saucer cream coloured shape shot from deep out in space between stars faster than anything I’ve ever seen, faster than anything made by humans as we do not have the power yet to go as fast as this disc, I thought for a minute it was a comet or something, it was faster than a comet. It looked like it just feel out off the sky iand past our planet. I was driving a coach back from London on the M3 Motorway on a September evening I was approaching Winchester and looking for Harvest Moon when I saw this shape just drop from out off outside of our atmosphere, from between the stars, so fast I could not believe what I saw, I’m usually a bit of a synic but hey < I saw this and I know people won’t believe it< it was like the Star Trek warp speed, the size of the disc compared to say a plane was absolutely huge 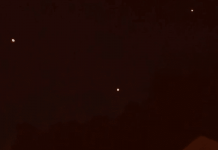 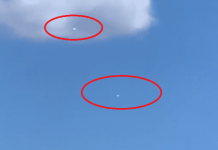 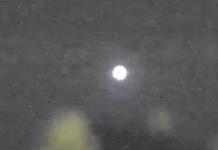