These orbs were recorded above Harrison Township, Michigan, just near Lake St Clair on 19th April 2020.

Witness report: Orbs flashing and appearing in the western sky approximately 9 were seen. My brother in law recorded this on 04/19/20 at approximately 9:30pm facing west from his home in Harrison township, Michigan. He stated there were approximately 9 orb type lights in the sky appearing and disappearing. They appeared to be moving in a northern direction. No navigation lights ( red and green) were seen, no sounds were heard. 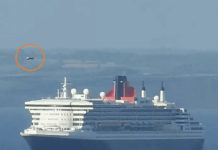