Morrison CO – 29 April 2020
I Live in Morrison CO. Walk my dog every night and watch the stars. As we were walking home tonight (from a dark state park “Bear Creek Lake Park” I saw what I thought was a shooting star just below the moon, then I saw it was followed by another-I’m thinking cool maybe 2 or a meteor shower, then 3, then 4, as 12+ ended up passing by, all evenly spaced apart, as small as Stars. I tried to film them but they were too small. All 12 plus were in a perfect line, evenly spaced apart, cruised right below and passed the moon until they went out of site. We have had drone sightings in CO before but these were not drones. We have the Air Force academy and a couple Air Force bases, but I’ve NEVER seen anything like this.
Has anyone reported something similar from Colorado tonight?

exton, pennsylvania – 04/27/2020 8:45PM and 9:05PM
Traveling from NW to SE. Three sets of three lights traveling in a perfectly straight line. No noise. No flashes. Just bright white lights. Brightness was more than the evening stars, but not brighter than Venus. Speed appeared slightly faster than what would normally be observed high altitude aircraft.
Thirty minutes later. Approximately 20 lights traveling on the same course in a perfect straight line. All other attributes were the same as the first set. The line of lights was relatively even spaced. The line filled the full field of vision.

Tennessee – 27 April 2020
Hey, i live in Tennessee and just wanted to get your opinion on this. Started the night the iss was supposed to be visible ive seen it two other times since with the latest being this evening around 930 cst. Its been in the same spot all three times.

Zandvoort, Netherlands – 27 April 2020
I am a Brit living in the Netherlands. I am a keen stargazer/amateur astronomer. On the evening of 27 April 2020, I saw a phenomenon that I have never seen before. I was looking southwards at 22.45 hours (local). I saw a pinpoint of bright light moving east-south-east (a heading of approx. 112 degrees) at speed. To my great surprise, it was followed at about 20-30 second intervals by a further 7 similar brightly lit objects, so, a total of 8. All were travelling at the same speed & track, except the 6th, which was a little further north, but travelling parallel to the other 7. It was a quiet night with no wind, but I heard nothing. (We are below a flight path for planes at 30,000 ft plus coming into Europe from North America; these we can normally hear, faintly).
These objects made no noise & had no navigation lights. They seemed very high, but as I could not estimate altitude, I therefore could not estimate speed, but they seemed faster than civil airliners……..
I discounted shooting starts as the constant distances between them, their tracks & identical speeds would seem to inconsistent with shootings stars.
I wondered if they might be military planes? But why no noise & no navigation lights if on a normal, non-clandestine mission. Why would they be lit up? And why would any power be flying over the Netherlands- with 8 craft- on a clandestine mission? Who’s air force?
I thought about satellites, but these don’t normally travel in groups and at speed. They are normally brighter, slower moving (to our eyes) & are bigger.
I also wondered if this might be the sun (already well over the horizon since setting 4 hours previously), reflecting on the underside of aircraft fuselages? Again discounted; no noise, no navigation lights etc… and the sun was long gone.
I’m wondering if there might have been even more objects- but that I’d only seen the last 8 of them. The whole incident is a complete mystery to me. I had no time to consider recording what I’d seen…….the whole incident was over in about 4 minutes.
I am a rational, educated man. I had not been drinking for several days & do not take drugs or have hallucinations. I definitely saw what I saw, but have no explanation.
Who should I contact?
Any suggestions (including taking a cold shower), welcome.

Carmel Indiana – 4/26/2020 10:10PM evening
Long line of luminated dots estimated number 20 to 25 traveling north west to south east from horizon angle to overhead and disappeared one by one. Estimated altitude 10,000 feet. It lasted about 3 minutes

New Albany, Indiana – April 26, 2020
At 1020pmEST about 45 degrees to the right of the north star 15-20 bright lights following each other in the atmosphere way higher then planes and then all the sudden at a certain point they all disappeared once each one entered the same spot in the sky then few mins later there were single one no line of them and then 15 mins later all 15-20 of them again but little closer to the moon

Virginia. US – 23 April 2020
This is not a joke: did anyone else who was out looking at the meteor shower tonite see the ufo? Me, dallas, jaylinn and hunter all watched it for over an hour! It zig zagged , was sporadic in its movements, extremely fast! Able to maneuver side to side as well. We pretty certain it isn’t a drone. Way too high…would have to have been one size of my truck at least! And over hour. Hour and half. Batteries that lasting????? Im seriously freaked out. We all are. Its amazing and terrifying simultaneously.

Val Comeau , NewBrunswick – April / 22 / 2020 9.24pm
a long (150+feet long) tube like series of bright and dark lights , going against the Wind 3+ miles up .Going realy fast more than supersonic making no noice , with the ban on airplane travel due to covid19 it was the only thing in the sky exept stars. Whe where 6 who saw it i tried to film it with no result , but whe got a picture of it. It turned at 2 miles in front of us and soom whent away.on the picture you can see a star on the right .if you look a bit lower on the left side the bright line is it!

Nuthall, Nottingham, NG16 1QN England – 19 – 04 – 2020
Last night at 21.30, i took my dog out and noticed 2 bright lights at great altitude travelling in a southwest to northeast direction. Then noticed there were more travelling in the same direction and counted 33 in all. Each one was positioned exactly the same distance apart in line astern formation and took 15 minutes to pass. There was no engine noise at all.

Cadiz province Spain – Friday 17 April 2020
At about 22.45 Spanish time we went out onto the roof of the villa to look at the night sky like we always do when clear. Whilst looking at Venus which was the brightest object in the sky we saw several bright lights [a total of over 25] moving in one directions away from the right of Venus. Then we suddenly noticed one after another traveling from the same direction. There were no flashing navigation lights or sound. I counted about a dozen in a row about 10 seconds apart. One would appear and disappear then another would follow. They were moving too fast and too high to be aircraft. First we thought they were satellites until we saw them come across one after another, I also noticed that one of them became quite bright and then accelerated away, this event went on for about 15 minutes until a thin veil of cloud came across. Sorry no photos.

Ireland – 17 April 2020
I took this in Ireland yesterday eve I didn’t see it until after I took photo of sun set ?

Wallisville, Texas – April 2020
Just figured someone might no what it is , it looks like a satellite sitting over the house about Last 2 weeks it doesn’t appear to move , i didn’t see that until I looked back at video

Fountain Inn SC – 13 April, 2130 EST
29 plus objects moving from NNE to SSW…60k feet or more.
Fast. Looked to be separated by one mile. All appeared to be on same vector. 9 people witnessed this.

Fountain Inn SC – 13 April, 2130 EST
29 plus objects moving from NNE to SSW…60k feet or more.
Fast. Looked to be separated by one mile. All appeared to be on same vector. 9 people witnessed this.

belgavi, karnataka, india – 04/09/2020
I was seeing the super moon as have an hobby of astronomical science . While seeing frm different angles of the moon i cud see some creatures like alien moving with some machinery collecting some things like soil i guess . I cudnt further zoom as my eyes and head started aching so within fraction of minute wht i saw i wanted to take video but cudnt so managed with some pics..
My finding is first landing of the space ship ie ufo..then with some machinery collecting some soil on the surface of the moon might be to get some energy frm soil as it contains iron magnesium ,etc these are my findings and thoughts. The crust of the Moon is composed mostly of oxygen, silicon, magnesium, iron, calcium, and aluminum. There are also trace elements like titanium, uranium, thorium, potassium and hydrogen. Since a week i am following up closely seeing the moon at night… Might these aliens hav power to change their colours and bcum invisible time to time bcz of rays of sun falling on the moon.. Moon does not have its own light. It gets its light from the Sun’s rays that fall on it and are reflected towards the Earth. Thus, we can see only the illuminated part, (i.e., the part on which the rays fall) of the Moon.

Chillicothe, OH between hopewell mound city & the CCI – 04-08-2020
I walked outside to get in my car to go to Pinnacle in central center. It was about 5:00am. before i get in the car i can see a very bright light kinda stationary hovering over town. I didn’t think anything of it so i get in my car and heading to town. As i get about a mile or two down the road i notice this bright object is an aircraft and starts moving slowly as if it noticed me and was gonna move along. As i’m driving closer it flies directly overtop the car. The night before some guy was arrested for tossing tobacco over the CCI fence so i figured it was military doj g surveillance over the prison. I had my phone on me so i snapped two photos of it. you can’t make out much detail but you can see that the object is glowing super bright. There is a star in the background for reference of how bright the object appeared. It was brighter than any aircraft lights i’ve ever seen. there were four fo five circular lights and greenish blue light in the front that was blinking. My dad asked if it was a helicopter. i said no it wasn’t a helicopter. I would’ve heard it if it was a helicopter.This aircraft had no noise to it which is why i knew it wasn’t of this realm. i told him i wish it were a helicopter so i wouldn’t be left wondering! i couldn’t make out what the object really looked like behind the lights due to them being so bright. I included a drawing of what i actually saw. It’s actually kind of amusing that i saw this cuz the past few weeks i’ve been really intrigued by watching ufo videos from your subreddit. I’ve always been interested in the paranormal but it was just recently that i began watching them. i’m not sure if anyone else reported anything from that day but ik everyone outside that morning had to have seen it. 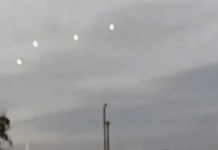 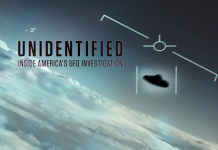