Home Cryptozoology News What Was the Beast of Gévaudan? – History 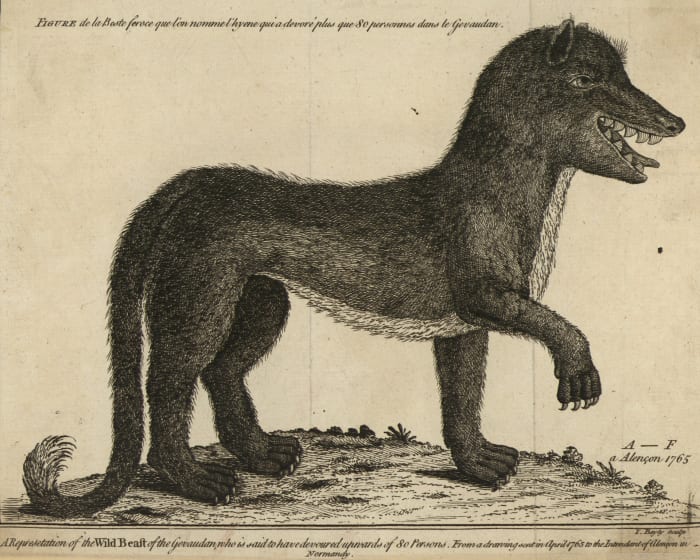 Between 1764 and 1767 a mysterious creature called the Beast ravaged the rural region of Gévaudan, France. About 100 men, women and children reportedly fell victim to La Bête du Gévaudan. While many French at the time presumed the Beast to be a wolf and many modern scholars agree, some have suggested that the Beast may not have been a wolf at all.

So what was it?

The first recorded fatal attack of the Beast occurred on June 30, 1764 when a 14-year-old shepherdess, Jeanne Boulet, tended a flock of sheep. Boulet was not the creature’s first victim. As historian Jay M. Smith writes in Monsters of the Gévaudan, about two months prior, a young woman tending cattle was attacked by a creature “like a wolf, yet not a wolf” but escaped because the herd defended her.

The attacks continued through the summer and into autumn, according to George M. Eberhart’s 2002 book, Mysterious Creatures: A Guide to Cryptozoology. France was in a slump at the time, on the heels of the Seven Years’ War. The nation had lost battles to Prussia and the British and Louis XV had lost overseas colonies. The Beast offered a perfect foil to rally around—and there was no dearth of reports in the press about encounters with the animal.

The bête féroce (ferocious beast) attacked and partially ate women and the young, according to the reports, but lone adult men were also targets. There were so many attacks that some speculated there were in fact two or more beasts.

The terrified populace of Gévaudan did not sit idle—and individual stories of bravery captivated the public. As Smith writes, bounties were offered and hunters combed the countryside looking for the creature. On October 8, 1764, hours after a mauling, the Beast was seen at Chateau de la Baume, stalking a herdsman. Hunters followed the animal into the estate’s woods and flushed the animal into the open. The hunters shot a volley of musket fire into the creature—but after a fall, the Beast rose and ran off.

Even children were celebrated for taking on the Beast. On January 12, 1765, the Beast attacked 10-year-old Jacques Portefaix and a group of seven friends ranging from ages eight to 12. However, Portefaix led a counterattack with sticks driving off the creature. The children were rewarded by Louis XV, and Portefaix was given an education paid by the crown.

The children’s heroics prompted the court of King Louis XV to send royal hunters to destroy the Beast. There was now a 6,000-livre bounty on the creature’s head. The story of the Beast, meanwhile, was spreading and covered in newspapers from Boston to Brussels, becoming one of history’s first media sensations.

Among the most notable tales of bravery was when 19- or 20-year-old Marie-Jeanne Valet was attacked by the Beast on August 11, 1765 while crossing the River Desges with her sister. Armed with a bayonet affixed to a pole, Valet impaled the Beast’s chest. The creature got away, but Valet became known as the “Amazon” and the “Maid of Gévaudan.”

On September 20, 1765, Francois Antoine, the king’s 71-year-old gunbearer, and his nephew shot a large wolf near an abbey at Chazes which was assumed to be the Beast. Antoine was awarded with money and titles and the corpse of the animal was stuffed and sent to the royal court.

But attacks started again in December, according to an account in the 1898 volume of the Parisian Illustrated Review. This time, the Beast seemed different, at least behaviorally. Where before the creature had been afraid of cattle, this time it showed no fear. Was this then a second Beast?

The royal court chose to ignore these new attacks, insisting that Antoine had killed the creature. Finally, a sudden outbreak of attacks in early June 1767 compelled a local nobleman, the Marquis d’Apcher, to organize a hunt. On June 19, one of the hunters, a local man named Jean Chastel, shot a wolf on the slopes of Mount Mouchet.

An autopsy of the animal revealed human remains inside, and the animal had non-wolf characteristics as described by witnesses. The attacks ended, but while it was assumed that the beast Chastel bagged was the Beast, doubts remained that it was indeed a wolf.

Description and Behavior of the Beast

The Beast was consistently described by eyewitnesses as something other than a typical wolf. It was as large as a calf or sometimes a horse. Its coat was reddish gray with a long, strong panther-like tail. The head and legs were short-haired and the color of a deer. It had a black stripe on its back and “talons” on its feet. Many drawings of the Beast at the time endow it with lupine characteristics.

Witnesses described the Beast as an ambush hunter which stalked its prey and seized it by the throat. The wounds found on the bodies were typically to the head and limbs with the remains of 16 victims reportedly decapitated. The creature prowled in the evenings and in the mornings.

Historians, scientists, pseudoscientists and conspiracy theorists have all proposed theories about what the Beast was. Among the suspects: a Eurasian wolf, an armored war dog, a striped hyena, a lion, some kind of prehistoric predator, a werewolf, a dog-wolf hybrid and a human.

Of the candidates the most fanciful is the werewolf. Smith points out that Chastel purportedly used a silver bullet to slay the wolf, thereby feeding into werewolf mythology.

Also unrealistic is that the Beast was an extinct prehistoric predator such as a Bear-dog, Dire Wolf, or Hyaenodon. The idea that such a large animal would evade detection for thousands to millions of years is just too implausible, Smith argues.

Others have suggested that a human serial killer may be responsible for the attacks. Many of the Beasts victims were reported to be decapitated, something few animals could do. While it is unlikely that a killer would roam about for victims in broad daylight wearing a bestial costume, those who support this theory believe that the human killer used an animal to carry out the crimes. What was the animal? Some have speculated that it was an armored war dog, which explains its strange appearance and why it shrugged off musket shots.

Some depictions of the Beast—and the animal slain by Chastel—suggest it resembled a striped hyena. It is possible that a striped hyena may have been in a person’s private holding and then escaped. Since it was not native to France, it would have appeared unusual. However, striped hyenas are not known to attack humans.

Karl-Hans Taake, a biologist and author of The Gévaudan Tragedy: The Disastrous Campaign of a Deported ‘Beast,’ argues the Beast may have been an immature male lion. Like the hyena, it is possible that a lion escaped from captivity. The Beast reportedly was an ambush hunter that seized prey by the neck and could possibly decapitate a victim. A lion, Taake argues, could exhibit these predatory behaviors.

Lions have been known to prey upon humans as food sources, such as the famous case of the lions of Tsavo, in which a lion pair killed over 130 victims in under a year. Another supporting fact is that the territory of the Beast, at roughly 56 by 50 miles, aligns with a lion’s typical range.

Eyewitnesses in France at the time were likely not familiar with living lions and what they did know about them came from very stylized imagery. A sub-adult male does not have a fully developed mane and sometimes has a mohawk type of stripe running down its back. This matches descriptions of the beast by eyewitnesses, Taake argues. One hunter at the time, Captain Jean Baptiste Duhamel, wrote, “You will undoubtedly think, like I do, that this is a monster [hybrid], the father of which is a lion. What its mother was remains to be seen.”

Among the theories considered most credible is that wolves perpetuated the attacks. As Smith tells Smithsonian, “Gévaudan had a serious wolf infestation.” He believes that large lone wolves were attacking individual communities across the region or that it was a wolf pack.

Smith asserts that many of the fantastical qualities attributed to the Beast were induced by clergy who stirred up fear in the populace that God was punishing the French for its defeat in the Seven Years’ War. For hunters, killing the beast was a way of reclaiming France’s lost honor.

Wolves are native to the region and had attacked humans before—some statistics show that wolves attacked humans 9,000 times in France between the 17th and 19th centuries. In most cases these types of attacks were by rabid wolves.

There are some potential flaws to the wolf theory, including the frequency of the Beast’s deadly attacks, suggesting it was not a single rabid wolf. Also none of its victims seem to have contracted rabies, suggesting that their attacker also did not carry rabies.