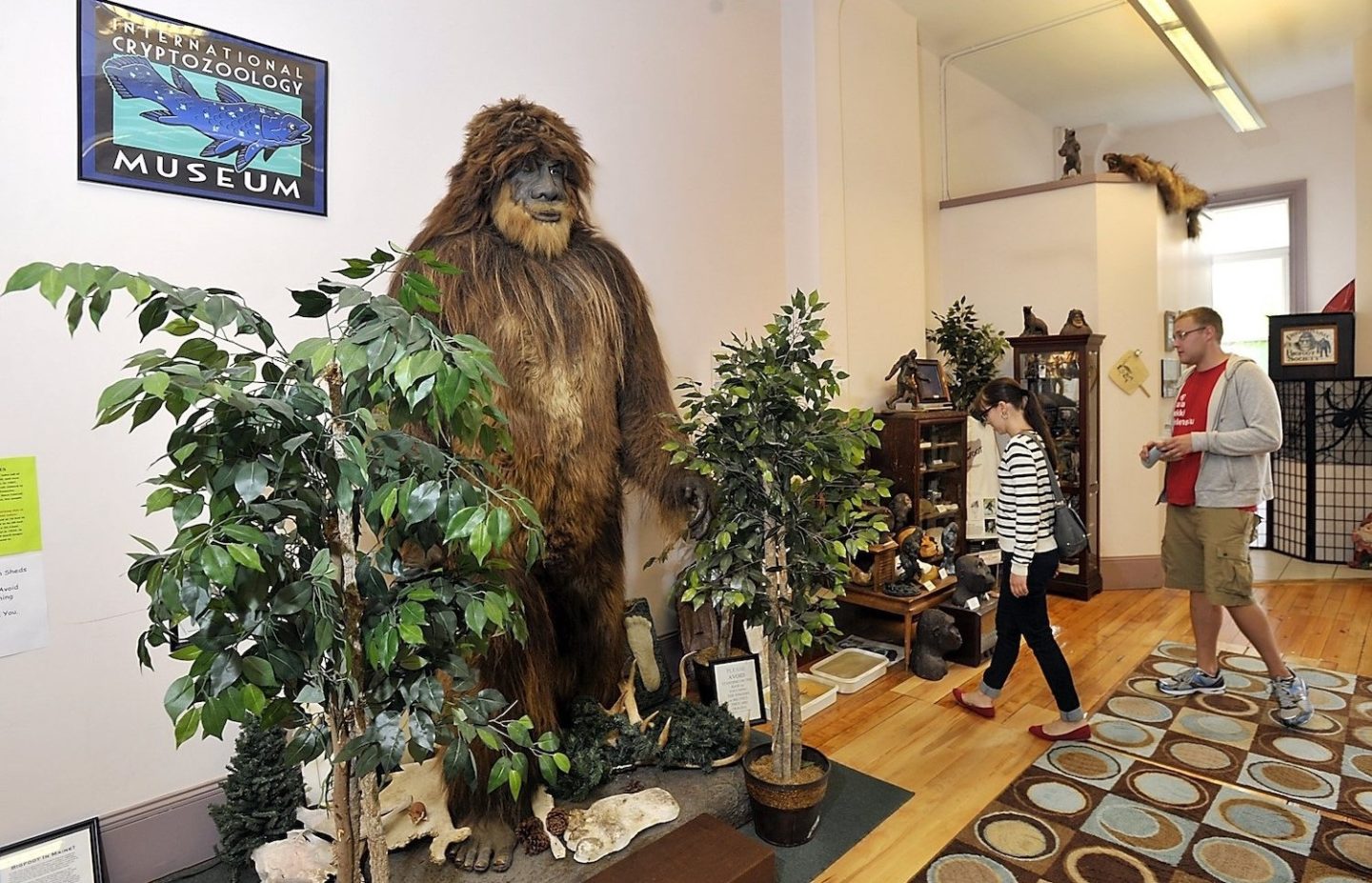 Some do believe. Bigfoot stands quietly outside the International Cryptozoology Museum in Portland, US, in 2012. Credit: Gordon Chibroski/Portland Press Herald via Getty Images

So, there we have it: The Loch Ness monster mystery apparently solved. News services around the globe have been running a story about scientists who carried out DNA testing of the water in the renowned Scottish lake and found clear evidence of – eels.

That’s something of a letdown when you consider that, according to a story in The Washington Post, reports about the “monster” go back as far as 565AD.

With all that’s going on in the world, surely scientists have better things to do with their grant money than pursue a mythical creature.

Well, maybe not. Some believe there is much of value to be gained in pursuit of mythological beasts – that, for example, as reported in Cosmos in 2017, “the search for mythical monsters can help conservation in the real world”.

We’re speaking here of cryptozoology, which National Geographic calls the study of “hidden life or animals”, adding that “it implies a creature that’s been recorded through folklore, something that we have reason to suspect exists”.

The Livescience website says cryptozoology is the study of “cryptids”, animals that are “rumoured to exist”, such as Bigfoot and Nessie, which “continue to tempt the hopeful and the adventurous with the possibility of their existence”.

But as an episode of the Discovery Channel’s Animal Planet television series says, “with the advancement of science and technology, not all cryptids have remained in the realm of hearsay”.

Although the program’s scientific credentials are diluted by its inclusion in the network’s Monster Week themed series, it makes the point that the komodo dragon, the okapi, the manatee, the platypus and even the gorilla were at one time considered to be mythical beasts.

In 2013, National Geographic reviewed a book about cryptozoology, Abominable Science! Origins of the Yeti, Nessie, and Other Famous Cryptids, by palaeontologist Donald Prothero and journalist Daniel Loxton, in which they analyse the history of mythic beasts and the clues to their existence.

Prothero says a cryptid is “any animal that has never been described by science… something that stretches the limits of what is scientifically plausible”, to which Loxton adds, “it implies a creature that’s been recorded through folklore, something that we have reason to suspect exists”.

In a 2015 article, The Washington Post reported on the long and controversial debate over the reality of Australia’s platypus.

In the late eighteenth century, British scientists had their first look at a platypus specimen, sent from Australia, and many believed it to be a hoax. “It naturally excites the idea of some deceptive preparation by artificial means,” English zoologist George Shaw wrote in 1799.

The Post article notes that “Shaw was the first to publish a scientific description of what turned out to be a very real creature”. In 1799, he gave the platypus its scientific name, Platypus anatinus (flat-foot duck).

“It’s easy to see why Shaw was initially skeptical about the creature he’d examined: ‘Of all the Mammalia yet known it seems the most extraordinary in its conformation; exhibiting the perfect resemblance of the beak of a Duck engrafted on the head of a quadruped’,” the article says.

“It was only with ‘the most minute and rigid examination’, Shaw wrote, that ‘we can persuade ourselves of it being the real beak and snout of a quadruped’.”

In the March 1999 edition of the journal BioScience, in an article headlined “The paradoxical platypus”, Brian K Hall says of the furore over the animal’s existence: “A rivalry that pitted nation against nation, naturalist against naturalist, and professional against amateur endured for 85 years before the true nature of the platypus was revealed. Long after the evidence was wrested from Nature half a world away from where the debate raged, professional biologists continued to argue about this paradoxical creature.”

“The world now had two names for this exotic creature,” Hall says. “Unknown to Shaw, however, the generic name Platypus had been used for a genus of beetles in 1793. Such are the strictures of the international rules of zoological nomenclature that Platypus had to be abandoned.

“However, Shaw’s specific epithet stood. The platypus thus became Ornithorhynchus anatinus. It seems entirely appropriate that this animal, which so resembles a hybrid, should bear a hybrid name.”

Jeff Glorfeld is a former senior editor of The Age newspaper in Australia, and is now a freelance journalist based in California, US.

There’s never been a more important time to explain the facts, cherish evidence-based knowledge and to showcase the latest scientific, technological and engineering breakthroughs. Cosmos is published by The Royal Institution of Australia, a charity dedicated to connecting people with the world of science. Financial contributions, however big or small, help us provide access to trusted science information at a time when the world needs it most. Please support us by making a donation or purchasing a subscription today.