Home Cryptozoology News Book World: A great Bigfoot novel may be lurking out there. Max... 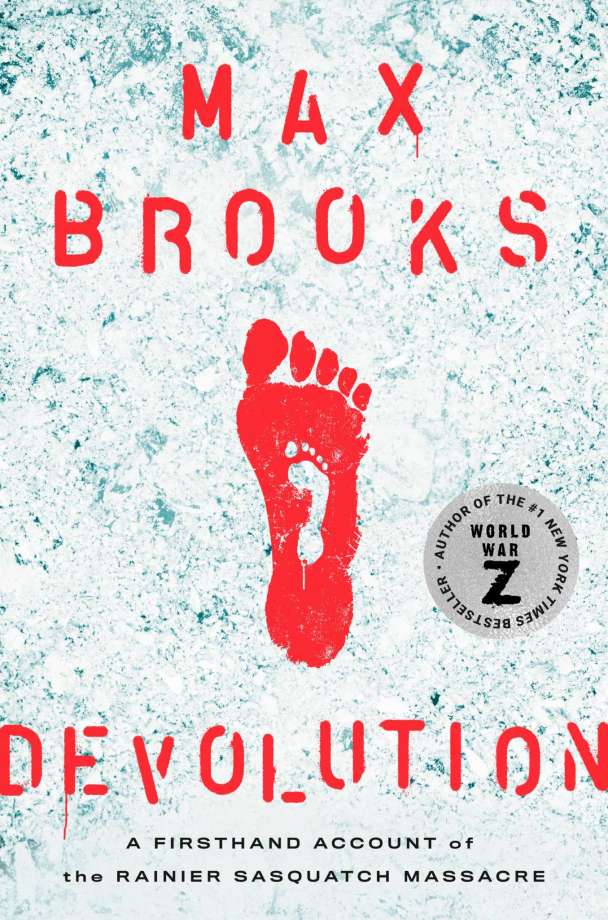 Book World: A great Bigfoot novel may be lurking out there. Max Brooks’ ‘Devolution’ isn’t it.

Devolution: A Firsthand Account of the Rainier Sasquatch Massacre

Bigfoot holds a big place in my heart.

Two years ago, a congressional race in Virginia took a weird turn – I mean weirder than usual – when Democratic candidate Leslie Cockburn accused her Republican opponent, Denver Riggleman, of being a “devotee of Bigfoot erotica.”

Cockburn claimed, “This is not what we need on Capitol Hill,” which showed how little she knew about Washington.

With my well-trained nose for important news, I got Riggleman on the phone. I learned that his opponent was referring to a crude parody that he’d once made for some of his old Air Force buddies. “I do not believe that Bigfoot is real,” Riggleman declared. “But I don’t want to alienate any Bigfoot voters.”

That bold strategy worked. Riggleman went on to carry the Yeti contingent and win the election in Virginia’s 5th District. For me, the results were more mixed. The story I threw together about Bigfoot erotica was popular. In fact, after two decades of carefully reviewing literary fiction, it remains the most popular story I’ve ever published.

Joshua Blu Buhs knows my heartache. In 2009, he wrote a cultural critique titled “Bigfoot: The Life and Times of a Legend.” He ventured into the dark woods not to mock but to understand what drove these obsessed searchers and conspiracy theorists. “Love is never easy, and loving a thing as ambiguous, as unclassifiable, as derided as Bigfoot was especially difficult,” he writes. “Like so many ogres, like any geek, Bigfoot was known by its appetite: its love could be all-consuming, devouring those things an enthusiast once held dear. Families, relationships, careers, all were sacrificed for the beast’s love.”

In other words, the myth satisfies such a primal need that if Bigfoot didn’t exist, we would have to invent him.

Which brings us to Max Brooks’ new book, “Devolution: A Firsthand Account of the Rainier Sasquatch Massacre.” This marks a significant change for Brooks, who is a well-known expert on zombies, which are still widely disputed, like werewolves or climate change. In 2003, Brooks published “The Zombie Survival Guide,” and his 2006 book “World War Z” was later made into a movie starring Brad Pitt.

With “Devolution,” Brooks brings his considerable investigative powers to a cryptozoological controversy that has been raging in the Pacific Northwest for decades. “I will let you,” he writes, “judge for yourself if the following pages seem reasonably plausible.”

Cleverly, some of the elements of this story do seem reasonably plausible, which, as we’ve learned, is the key to any abominable conspiracy theory. Brooks includes factual footnotes, interviews with a park ranger and excerpts from Teddy Roosevelt’s 1893 memoir, “The Wilderness Hunter.” But the meat of the book is a document of somewhat more questionable provenance: a diary retrieved from the site of a grisly massacre in Washington state.

The author of this diary is a missing woman named Kate Holland. She and her depressed husband, Dan, were members of a small group of tech pioneers who joined a utopian community called Greenloop built in “a mountainous, primeval rain forest as treacherous as anywhere in North America.” The six smart homes, powered by methane gas from the occupants’ poo, are the epitome of the green revolution: “No more sacrifice, no more guilt.” Physically removed from the troubles of the world while remaining linked by high-speed Internet access, the Greenloopers are free to enjoy “the best parts of both an urban and rural lifestyle.”

Fortunately, the founders of Greenloop, a handsome tech guru and his yoga-teaching wife, have anticipated every contingency, so there is absolutely no way anything could go wrong.

First, Mount Rainier erupts with a volcanic explosion. Kate writes, “It felt like a giant foot had kicked the house,” which is a little too on the nose. That cataclysm sends out a tide of lava and boiling mud that cuts off the Northwest corner of the country. Greenloop is too far away to be threatened directly by the volcano, but the explosion takes down the community’s Internet and cellphone service, which is tremendously irritating when you’re trying to watch “Young Sheldon” or defend yourself against an emboldened band of carnivorous Sasquatches.

Only one of the Greenloop group is truly ready for what’s coming: an older woman nicknamed Mostar who survived the Bosnian War. At the first sign of trouble, she starts rationing food, cutting spears from bamboo and offering wise advice like “People only see the present through the lenses of their personal pasts,” which I’m assuming sounds more profound in Bosnian. The yoga instructor, meanwhile, wants to make sure no one hurts any of the forest animals. “They’re just trying to eat,” she says a few days before becoming a spandex-clad flank steak.

Given the monster stories set upon the world by Mary Shelley and other masters of the macabre, Brooks is trying to fill some awfully big shoes here. The results are uneven. We want our horror either campy or spooky, but for far too many pages, “Devolution” plods along a dull middle ground, not so much building suspense as venting it. We get the Crichtonesque warnings about relying too much on technology. We get the nervous declarations that there’s nothing to worry about. We get the strange sounds that are probably just a raccoon BUT ARE OBVIOUSLY NOT A RACCOON.

Trouble is, all these conventions of the trapped-in-the-woods frightfest are now as well known as the Patterson-Gimlin film of that guy in the gorilla costume looking over his shoulder. Without considerably sharper writing, making us wait more than 100 pages for the inevitable reveal of our hairy antagonists is just cruel. As Chekhov once said, if there’s a Bigfoot lurking in the forest in the first chapter, he must go off in the second.

Part of the problem is the diary format. We’re stuck in Kate’s limited perspective trudging through her flat prose. And we have to believe that Kate keeps taking time off from seeing her neighbors ripped limb from limb to jot down her reflections on the day’s activities. “So much has happened,” she writes. “Where do I even begin?”

But at least when the Bigfoots (Bigfeet?) finally start attacking, the mayhem is satisfyingly ferocious and gory. Alas, if there’s a lesson here, it’s wasted on most of the Greenloopers: “Some of them realize, too late, that nature is anything by harmonious.”

There’s probably a great horror novel about Sasquatch out there somewhere, but I won’t believe it till I see it.

Charles writes about books for The Washington Post and hosts TotallyHipVideoBookReview.com.