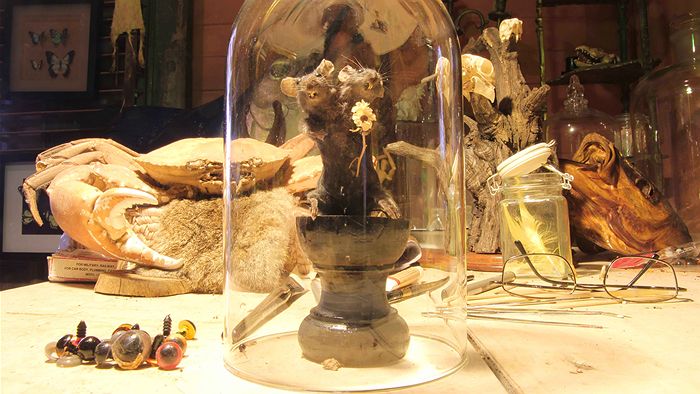 Christian is a trained taxidermist with a fascination and talent for creating unusual creatures.

Cryptozoology deals with animals which may or may not exist.

Hybrids like the Fiji mermaid (half monkey, half fish), the fur-bearing trout and the Swedish rabbit-bird are examples of such beasts; deftly fashioned by skilled taxidermists to appear as if they were real.

His workshop is adorned with a curious collection of horseshoe crabs, antlers, birds and fish.

He has created several ‘cryptids’ such as a bat-winged cat and the fabled jackalope.

“A jackalope is a rabbit with little tiny deer antlers,” he said.

“They usually stand on their back two legs.”

Christian’s workbench is covered with more than a dozen bird skeletons that a friend found in the leg of an antique diving suit.

“I strip them down so it’s just bare skeleton and then I mix and match it until I’ve got a complete one,” he said.

“Then I’m going to mount it in a little display with a bit of driftwood.”

Most of his taxidermy creations are made for other people, but Christian has recently finished a two-headed mouse holding a flower.

He wants to make a faux thylacine from other animals, but his dream is to stitch together a German beast known as a Wolpertinger.

The creature combines features such as the head of a rabbit, the body of a squirrel, deer antlers and the wings and feet of a duck.

“I’ve got the duck feet already, I’ve got a spare set of antlers,” Christian said.

“I’m just after a decent set of wings and a suitable furry mammal for the body of it.”

It seems there is no shortage of sources for new material.

“I can’t drive past road-kill without stopping to see what it is,” he said.

Tools of the taxidermy trade

Many of the tools and materials needed for taxidermy can be found at hardware stores, but other supplies need to be purchased online or made from scratch.

Recently Christian has taught himself how to make realistic replica eyes.

“The small stuff, up to about the size of a cat, you can get away with using teddy bear eyes you can buy at a craft shop,” he said.

“But the big stuff or something with a different iris [are] resin.”

He has made fascinators out of feathers, a flock of flying seagulls as well as a huge collection of works featuring mice.

“Different poses, little helmets for the mice, little mitre hats for the bishops.”

Taxidermy and the first date

Despite his passion, Christian keeps his taxidermy hobby mostly under wraps when meeting new people.

He recalls the story of a date he had invited home for coffee who once asked what taxidermy was.

He told her to look in his freezer.

“She didn’t stay for the coffee,” he said with a laugh.

“I realise it’s not to everyone’s taste… but for the people who do enjoy this stuff, I’m happy to meet them and happy to compare notes.”

Cryptozoological taxidermy may not be appeal to everyone, but for Christian it is a kind of ‘upcycling’.

“The spirit that lived inside this thing is no longer there and the body is neither here nor there,” he said.

“So if I can make use of it and if I can do something that makes other people appreciate the form it is or the essence of it then I think it’s a good thing.”

Note: Christian requested for his surname to be withheld. 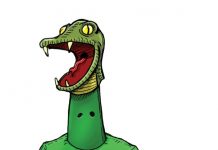 The Pacific Northwest Is Crawling With Cryptids, and Not Just Bigfoot. Here’s How to Dress Like One of Oregon’s Other Monsters for Halloween. –... 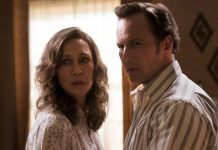 #GhostHunters, back on the hunt! instagram.com/p/CQZgvTjtynv/…

Movie review: The Conjuring: The Devil Made Me Do It –...