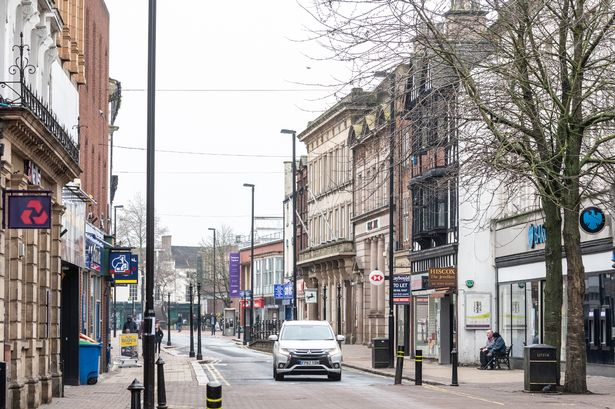 A hospital patient was given the fright of her life after unknowingly snapping a photo of a dark life-like shadow she believes is a ghost.

The photograph was taken on the fourth floor at Royal Derby Hospital and has now been passed to Burton medium Ian Griffiths, who believes it is the spirit of a man – and one of many spooky apparitions people have seen walking the hospital corridors.

The photo seems to have been taken at night, with several lights illuminating the empty corridor.

In the distance, a long, dark shadow can be seen on the left-hand side with the shape of a head and a body.

The photographer, who did not want to be named, said: “When I came out of the lift and started walking up the hall way it just felt spooky and scary.

“The reason I took the picture was because I was going to put it in my family group chat and say, ‘look how scary this looks and I’m here on my own at this time’.

“But then forgot all about taking the photo and I think I just happened to be looking at the photos on the Saturday and saw it.”

How to get the latest Burton news

Did you know you can now get the latest Burton news, straight to your inbox?

To sign up, all you have to do is enter your email address into the “sign up to FREE alerts” box at the top of this article.

She later said that on a second occasion she saw a man exiting a side door, pushing a wheelchair with an elderly woman in it.

She moved to one side to let them pass and say hello. She took the photo and thought she got them in it but nothing was on it.

“When I received this photo it stood out.

“I picked up a male spirit – a tall, thin male. He didn’t feel very old.

“It is an amazing photo and good capture.

“I remember investigating the old Derby Royal Infirmary years ago when it was closed and emptied.

“We had objects rolled back at us.

“We rolled a small ball on one of the old wards in the hospital, and as we were leaving the ward we felt something hit our feet. It was the ball.

“When we were on one of the old theatres we asked if anyone was there and to tap or do something. We heard a scalpel tapping on the steel sink that was in there.”