Home Cryptozoology News Why Bigfoot and the ‘Abominable Snowman’ Loom Large in the Human Imagination... 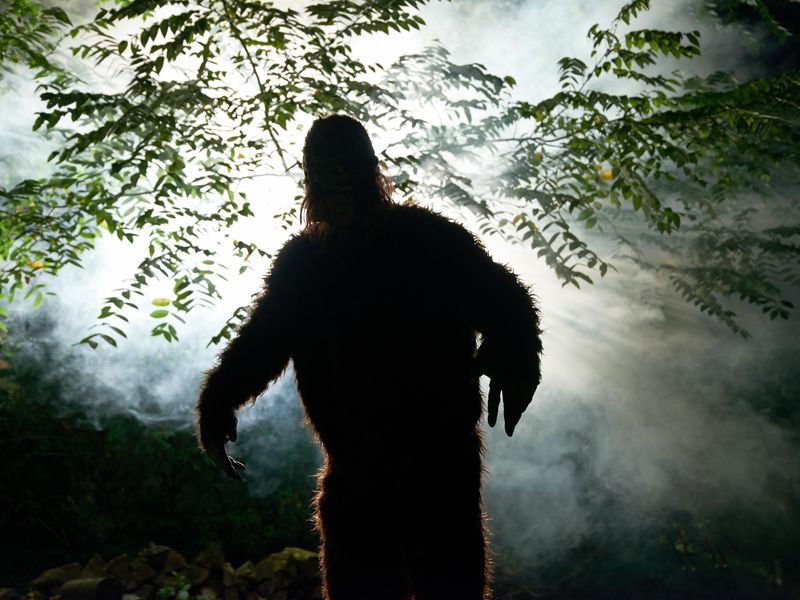 Bud Jenkins and his wife were living on far reaches of the small town of Fort Bragg, California, just on the edge of a vast coastal redwood forest, when it happened. On February 7, 1962, Jenkins’s wife’s brother Robert Hatfield, a Crescent City logger, had stepped outside the house around 5:30 in the evening when he heard the Jenkins’s dogs barking. Looking to see what was causing the commotion, Hatfield turned and saw a creature standing “chest and shoulders above a 6-foot-high fence” at the back of the property. “It was much, much bigger than a bear,” he later recalled. “It was covered with fur, with a flat, hairless face and perfectly round eyes.”

Hatfield hurried inside to tell his hosts, and the three of them set out searching for this strange creature. Coming around the side of the house, Hatfield ran straight into the thing, which knocked him to the ground and then chased the three of them back into the house. As they tried to shut the door, the creature threw its weight against the door, blocking them from closing it. Finally, Bud Jenkins went to get his gun: “I’m going to shoot the damn thing,” he yelled—at which point the monster relented and fled. Afterwards, they found a 16-inch footprint and an 11-inch dirty handprint on the side of the house.

The Fort Bragg bigfoot incident of 1962 was one of a cluster of Bigfoot sightings, all of which seemed to be pointing to the same thing, that we were on the verge of a major new discovery, of something hidden and new in the Northern California wilderness—as though the logging camps and suburban towns pushing further into the coastal wilds had disturbed the habitat of some terrifying, undiscovered neighbor.

Fort Bragg never had any other sightings of Bigfoot, nor was the Jenkins home incursion ever officially debunked as a hoax or confirmed as a true sighting. If Bigfoot had been on the verge of emerging from the redwoods, it soon retreated back into the impenetrable forest. But it was enough to put Fort Bragg on the map: one of those rare and peculiar locales that was now associated with this strange and unidentifiable creature.

Suspend, for a moment, your disbelief of a wild and ferocious creature who nonetheless knew enough English to understand Jenkins’s threat and knew to flee before it got itself shot. The story of Bigfoot—and the many other names he travels under—is, after all, the story of such confusions between human and animal. It is the story of the creature uncannily close to us, encroaching from the wilderness into our homes.

Reports of such creatures like Bigfoot aren’t new; they’ve been around for centuries. Bigfoot and its siblings—Sasquatch, the Yeti—have long been recognized by folklorists as variations on an archetype known as the Wild Man. The Wild Man legend is old, and spans many cultures; usually the story involves some large, hairy figure, like a man but different, harassing a town, stealing food or livestock and drinking from the town’s water supply. Eventually, the villagers eventually swap the water for fermented milk or other alcoholic soporific—the wild man falls asleep, allowing the villagers to kill or capture him.

Such folklore can reflect our uneasy relationship to the natural world around us: While we see ourselves as civilized, differentiated from the wild beasts of the forests, the wild man mythology presents a shadowy remnant of our former, uncivilized self. By the 20th century, though, the wild man mythos had developed other, less savory connotations. Bigots and eugenicists pushed junk science claiming genetic differences between ethnic groups, and arguing that whites were biologically superior, myths of the wild man—uncivilized and beast-like—found new purpose in racist pseudo-science. (Among those obsessed with finding evidence of Bigfoot in the 1950s was the Harvard anthropologist and crypto-eugenicist, Carleton S. Coon.)

For people who don’t know the term “cryptid” (any animal that is claimed to exist but whose existence has not been proven), the easiest shorthand is simply “creatures like the Loch Ness Monster and Bigfoot.” These remain, after all, the two most popular and enduring examples, the ones most ubiquitous in popular culture. But sea monsters and Wild Men are very different animals, and live on opposite ends of a hidden spectrum. In 1978 two psychologists surveyed mainstream scientists on their beliefs that either the Sasquatch or Nessie existed; while most didn’t respond, and ten percent of respondents provided “abusive comments of one kind or another,” the results from those who did engage in the question were nonetheless illuminating. More scientists surveyed were willing to entertain the possibility of Nessie existing than Bigfoot or its relatives (23 percent of respondents, versus 13 percent.) But, given the two of them, over half (57 percent) of the respondents would view the theoretical discovery of something like Bigfoot as having a severe impact on science, whereas only 3 percent of respondents felt similarly about Nessie.

Water beasts, no matter how fanciful and elusive, are really not much different than the colossal squid or the oarfish—bizarre underwater creatures we rarely get glimpses of and understand very little about. Were we to find definitive proof of a water beast like Nessie, it would be exciting, and, should the animal prove to be a dinosaur, a major revelation. But it would also be, finally, just another animal in a vast kingdom. Wild Men like Bigfoot are different—they are, in a word, abominable.

The name “The Abominable Snowman” was originally a translation error. Henry Newman, an Anglo journalist working in Calcutta in the 1920s, first heard reports of a Wild Man on the slopes of the Himalayas from members of a 1921 British expedition to summit Everest led by Lieutenant Colonel C. K. Howard-Bury. Sherpas on the expedition discovered footprints that they believed belonged to the “wild man of the snows,” and word quickly spread through the Tibetans. Newman, hearing these reports, garbled the Tibetan term metoh kangmi (which means “man-like wild creature”), misrecognizing metoh as metch, and mistranslating “wild” as “filthy” or “dirty.” Settling finally on “The Abominable Snowman” for his English-speaking readers, the name stuck. Cryptozoologist Ivan Sanderson would later describe the impact of the name as being “like an explosion of an atom bomb,” capturing the imagination of schoolkids and armchair explorers all over Europe and America.

An abomination does more than evoke metaphysical horror and physical disgust; it is an affront to the ways in which we understand the world. Mary Douglas, in her 1966 anthropological classic, Purity and Danger, argues that one of the fundamental means humans have for understanding the world is to organize it into the “clean” and the “unclean”: religious rituals and prohibitions, taboo and transgression, all work to formalize these categories. But abominations, she writes, “are the obscure unclassifiable elements which do not fit the pattern of the cosmos. They are incompatible with holiness and blessing.” On the border between here and there, an abomination doesn’t just mark the limit of civilization, it troubles the boundaries themselves, it interrupts the categories we make to make sense of the world.

Unlike the Loch Ness Monster, the chupacabra, or some giant thunderbird, a Wild Man necessarily straddles the worlds of the human and the animal, with one big, hairy foot in each realm. Would such a creature prove to be a missing link of some kind? Could it use tools, would it have a language? Would it have rights? Wild Men raise these questions because they trouble the line between human and non-human. And despite the absolute lack of evidence of their existence, stories remain, with the Wild Man forever just outside the door, threatening to come inside.