Home Paranormal News The COVID-19 Ghost video strikes a chord with a city in lockdown... 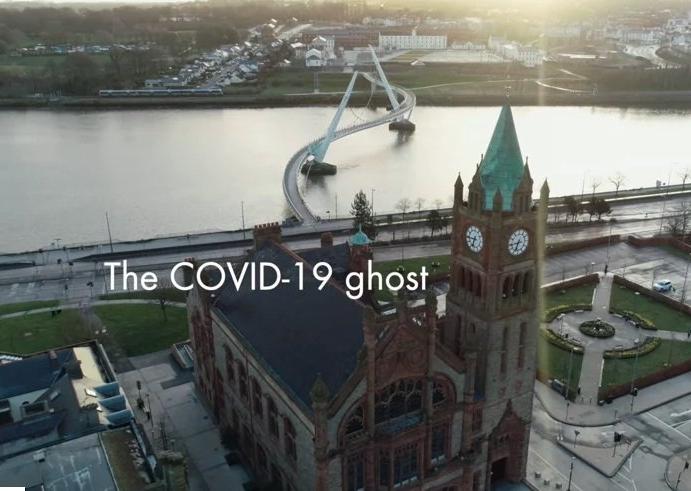 The stunning footage for the ‘Covid-19 Ghost’ was shot by renowned videographer Charlie Oundo (Simba) who runs Simba Star Media.

Charlie teamed up with Derry Journal Senior Sports Reporter Simon Collins, who wrote and vocalised a narrative over the footage (full text below).

The film contrasts the city we all know so well, and all the things that we did and took for granted we could do up until a few short weeks ago, with the haunting silence of the streets today during the coronavirus lockdown.

The result has struck a chord with local people, and has now been viewed over 30,000 times since it was uploaded on Simba Star Media’s Vimeo channel less than a week ago.

Charlie, who has also studied video journalism and also worked for ITV and the former Channel 9, met Simon when he filmed his wedding to wife Orla last year (extracts from the footage from their big day are included in the film).

Charlie said he was stunned by the amount of views, but was pleased that the film had resonated so much with local people.

“It has the most views of any of my videos – even more than James McClean’s wedding! My primary job is being a wedding videographer, and because of the present situation, and to keep my sanity, I decided to do something. I had the footage from local events and I had an idea to compare and contrast what the city was, life now, bearing in mind the history, the Troubles.”

Charlie, who is originally from Kenya, said that since he first arrived here he saw that society was moving beyond the ‘orange and green’, despite the history of division.

“Normally people are used to seeing an enemy on physical distinction but with this enemy now (COVID) you don’t see anything, you just see statistics and figures.

“I pitched what was in my head to Simon and he sent a script back to me. I asked him did he want to do the voice and he was reluctant to do the actual voice at first and thought maybe someone else should. I thought that as they were his words he could express them and it added something to it. It was powerful.”

Charlie said he has wondered about what the impact will be on the psyche of a society where people normally converge and are drawn together but are now instructed to repel, especially if the measures in place now are prolonged. “It almost feels like if this becomes normal it will be difficult to switch back out of it,” he said.

But like the video, he ends on a hopeful note, asserting that we will regroup and come back from this, the strangest of times.

IF THIS coronavirus crisis has taught us anything it’s how both precious and delicate life really is.

The most basic commodities and the most precious of all, freedom has been curtailed.

No longer will we take a hug from a loved one for granted, a meal in our favourite restaurant, a drink in a bar, a concert, sporting event or even a trip to the local shop without the need to wear protective clothing.

For our lives have been turned upside down as COVID-19 – accompanied by a mass hysteria – has swept so ferociously across the globe leaving people gripped by fear, living in panic, confusion, grief and an unprecedented disruption in its wake.

Make no mistake about it, this will become the most challenging time in our lifetime!

But in the midst of it all, we’ve seen the beauty and the strength of humanity as hardship has brought communities and people together for the good. United by a common enemy.

For so long in Ireland we’ve been divided by our politics and beliefs – green versus orange – but this enemy, we’re constantly being told, knows no borders, knows no religion – it simply doesn’t discriminate. Old enemies united against an invisible one!

St Patrick’s Day parade and the Twelfth of July demonstrations all cancelled in light of the ongoing public health crisis.

Summer is the time for weddings and celebrations but our most sacred events have been cancelled, postponed, as young love must wait in the wings. It now truly is and will remain for now, ‘the maiden city’.

And it’s a silent and faceless killer. We don’t have a bad guy to haunt down or hate – just an image of a rotating spiky ball – a menacing looking microbe!

Derry’s Walled City has attracted so many visitors from around the world through the years but now its residents are locked in fear behind their own four walls, besieged by a pandemic and living in the hope that our self-isolation can make a difference. Stop the spread of this invisible illness which has changed our lives perhaps forever!

Almost overnight life came to a screeching halt. The hustle and bustle of the busy city centre is replaced by an eerie silence which has descended over the streets of Derry and transformed it into a ghost town – devoid of life and character. A vibrant city suddenly awoke to a complete standstill! The sound was abruptly turned down.

It’s not so long ago since the streets of this historic city were paved with thousands of revellers who came to soak up the atmosphere at the world famous Hallowe’en carnival or the Clipper Festival on the banks of the Foyle and the ever growing Jazz festival – large scale social events which seem like a distant memory and will likely never be the same again.

Thousands of party-goers had crossed the iconic Peace Bridge on their way to the MTV festival and One Big Weekend in Ebrington Square.

‘Those were happy days in so many, many ways, In the town I loved so well’, as Phil Coulter so eloquently put it.

Now the Guildhall clock chimes with our society’s fears. The 2013 capital of culture, which relies so heavily on tourism, retail and the hospitality industry and has done so much to transform its image over the years, has shut down its museums, its shops and its hotels – its lifeblood.

This beautiful city has survived a siege, the bombings and shootings of the Troubles and now it must build itself back once more. Covid-19 has left its own legacy and will have a profound impact on local businesses and the people of our city but one thing Derry people possess is resilience and fortitude.

It’s hard to get your head around such a seismic shift in our lives. It’s a paradigm shift of epic proportions.

We had lived such a sheltered life, oblivious in some ways to the dangers of a potential pandemic which belonged only in the movies. Now this foreign threat is on our doorsteps.

The ghost killer from Wuhan seemed so remote to us, so far from home but suddenly it’s among us, meddling with our lives and the health of our loved ones. Once people began to get infected on our shores we began to take a different perspective and live our daily lives accordingly. People are beginning to understand there is nothing in the world so remote it can’t impact you as a person.

We are moving around the planet in greater numbers than ever before and at an unprecedented speed and disease and pandemics are only a plane journey away.

For now planes are grounded, borders are closed and yet death tolls are rising daily. We sat up and took notice of the warnings from our political leaders who were telling us to lock down and adhere to social distancing rules, restricting us to our homes.

We begin to live by the new government imposed restraints, afraid to venture out as a cough or a sneeze now raises suspicions. It’s the new world order! Economic chaos will ensue. People laid off in lockdown, pay cuts and financial meltdown.

People are stockpiling food, panic-buying essentials and the shelves are empty, not a bog roll or loaf of bread in sight.

One by one we queue at the door of the supermarket like lambs to the slaughter. We’ve become suspicious of our neighbours. Are we too close? Are we allowed out?

We’ve been battling boredom. And what if wi-fi and the internet was the next thing to shutdown? How would you cope?

The biggest enemy is not the virus, it’s become our mental health and keeping in touch on social media, watching netflix and playing games consoles has been keeping people entertained. We’ve been homeschooling our children and some of us are attempting to keep our minds and bodies active with online gym workouts keeping cabin fever at bay.

It’s like living in a dream-state and we’re all hoping, patiently waiting to awaken from our slumber and return to a normality we once took for granted.

But as we lock ourselves away in the safety of our own homes, think of those who have sacrificed their home comforts and who have forced themselves away from their loved ones to be placed on the frontline in the battle against this virus. The NHS and healthcare workers are on the frontline of this war – they’re the only line in our fight against the tsunami that is COVID-19.

Our NHS workers, delivery drivers, supermarket staff and all those who are ultimately risking their lives to keep us safe and supplied, we are so very grateful for their bravery and their duty of care.

The only good thing that has come out of our current situation is that it has brought communities closer. Some of our old and vulnerable are alone in their homes, isolated but we’re alone together in this,

It’s important to find goodness and purpose in the face of tragedy and adversity.

The virus may have taken our freedom but ‘freedom is nothing else but a chance to be better’ to quote the French writer, Albert Camus.

Think back to the way you lived your life before this pandemic spread ferociously through our streets. Question it. Can you live a better life? Can you help others? Can you be more appreciative and more aware of the things you took for granted? Make this tragedy the catalyst for change!

The defining legacy of most disease outbreaks is their lack of legacy but surely the world must take action and preventative measures to ensure the next time we’re not hit so hard and left as helpless as we are now. It could be the most painful of lessons.

When we eventually pull through, will coronavirus make us reconsider how we live our lives. Will we emerge with a new sense of vulnerability? Will we take proactive measures to ensure society and life doesn’t collapse around us should this happen again?

The dawn comes after the darkness and as society eventually repairs itself, life will begin again and we will once again show how resolute the human spirit and the people of Derry really are.