Home Paranormal News New book offers a look at hauntings in CT, and you might... 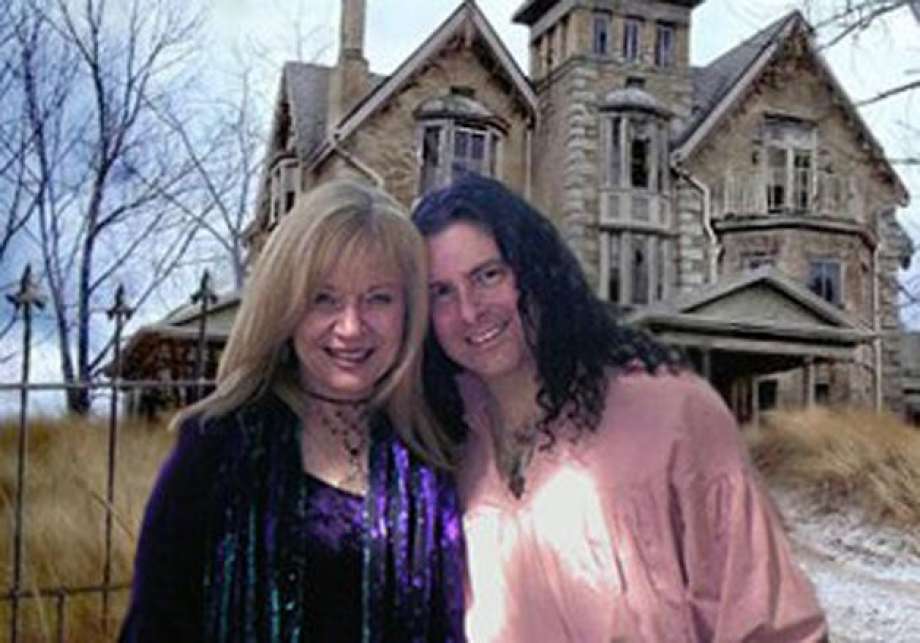 Tom D’Agostino and Arlene Nicholson in front of an undisclosed haunted location.

Tom D’Agostino and Arlene Nicholson in front of an undisclosed haunted location.

New book offers a look at hauntings in CT, and you might be surprised where

Litchfield is Connecticut’s least populated county, yet, according to the authors of a new book, it boasts more ghosts and legends than anywhere else in the region.

These hauntings reportedly include haunted caves and camps that harbor spirits that once called these places home.

The book. “Haunted Litchfield County,” for instance, reports that “The Clairvoyant of Colebrook” communicated regularly with the dead, while some guests of the now-closed Yankee Pedlar Inn “refuse to leave.” There’s a ghost canoe floating in Twin Lakes in Salisbury, and a “friendly literary spirit” at the Bank Street Book Nook in New Milford.

The book (Arcadia Publishing and The History Press) of paranormal happenings in Litchfield County towns and cities was researched, written and photographed by Tom D’Agostino and Arlene Nicholson, who have been extensively studying and investigating paranormal accounts for more than 37 years with well over 1,200 investigations to their credit, according to the pair.

As the creators of 13 books and counting, together they have penned and captured on film the haunts and history of New England. The pair said they have appeared on numerous television and radio shows, and have been interviewed by numerous publications with regard to the paranormal.

D’Agostino is a graduate of Rhode Island College with a degree in political science, and builds his own musical instruments, many from the Medieval and Renaissance eras. Nicholson is a professional photographer, and is a tarot card reader with years of experience and success in the field. The pair reside in Connecticut and work with some of the most notable names in the field, investigating the paranormal in New England and beyond.

The couple hosts “Dining with the Dead 1031,” an interactive investigation dinner event where the guests become the investigators in some of the most haunted locales in the region. “We started writing books about 15 years ago,” D’Agostino explained. “We began with ‘Haunted Rhode Island.’ We were both born and raised in Rhode Island, the smallest state in the U.S. with the most haunts per capita.”

Before they began writing books, the pair visited Litchfield County and were enthralled with the area, said Nicholson.

“It is rich with legend and lore and we felt it would make an interesting book,” added D’Agostino.

The latter said he and Nicholson were aware of some of the local hauntings. “Some haunts are well-known within the paranormal community and I had read about them over the years.”

Said Nicholson, “We were curious as to what more existed. The more we researched, the more we found. It was quite eye opening. The Evergreen Tavern (Woodbury) we visited just after renovations were completed and before the new owners reopened the Tavern. The spirits actually acted up while we were there taking photos. The Evergreen was quite a surprise also but I never expected some of the accounts we researched.”

D’Agostino also thought the story of the “Winsted Wildman” was intriguing.

At the very beginning of the process of writing a book, the pair said they go to the internet to get a feel of an area. Then they delve into their personal collection of approximately 2,000 books on New England history, legends, haunts and related subjects.

“We visit historical societies and make phone calls to set up interviews with those who are knowledgeable about the mysteries of the region,” said D’Agostino.

Added Nicholson, “When we gather enough information, we break out a good old-fashioned road atlas and plot a course, book places to stay, and hit the road. The rest is usually serendipitous, which is always the most magical part of the process.”

The pair visited the county six times. “A few times, we were able to multi-task because we also conducted private investigations in the area,” said Nicholson. “From the time we were contracted to write the book until its release was approximately one year,” D’Agostino explained. “We did have a bit of a head start, though, because we garnered some of the material years before we even thought of writing the book.”

Nicholson said she and D’Agostino love the region, adding, “We found it fascinating and wanted to delve deeper into history, haunts, and legends. D’Agostino chipped in, “Some people told us there was not a lot to write about in the area, but the more we dug, the more we found, and the more fascinating the region became to us.”

Nicholson said that the couple’s collaboration is a “mix between working seamlessly and bouncing ideas off one another. We seem to have come up with a system where we each use our strengths and ideas.

“For example, Tom does the initial research and I do the edits the first drafts. We then visit the places to get a first-hand experience of locations, and conduct paranormal investigations when applicable. We also take photos for the book,” Nicholson said. “We do a lot of editing while traveling. Tom will read what we have while I drive and we discuss edits and revisions. We go back and forth with each other until we feel the product is ready for the publisher’s eyes.”

D’Agostino said of paranormal research, “There is so much we still do not know. Until we can go to the ‘the other side’ and come back, or develop a definitive technology that can actually allow a ghost to sit and chat with us, we are grasping at straws for answers. We may never know in our lifetimes why ghosts, spirits, or whatever you wish to call them exist.”

The authors said they are more than satisfied with their new book. “As always, History/Arcadia publishing is fantastic to work with, the publisher, art, and editing departments are second to none,” offered Nicholson. Said D’Agostino, “This book, being the only one of its kind, is very exciting for us. We appreciate the opportunity to write a whole collection of stories that Litchfield’s people can enjoy. We are thrilled about the final product.”

He added, “Although Litchfield County may be the most sparsely populated county in Connecticut, it is truly alive with history, incredible accounts of ghosts, legends, folklore — and even a `Wildman.’”

The book can be purchased starting Sept. 14 at Barnes and Noble, Amazon, the History Press website and many independent and small bookstores, gift shops and other stores throughout the region.

Getting ‘ghosted’ at Emerson? It’s more common than you think. – Berkeley Beacon