Home Cryptozoology News Bigfoot, mystery mountain lions, UFOs all ‘out there’ in Pennsylvania, according to... 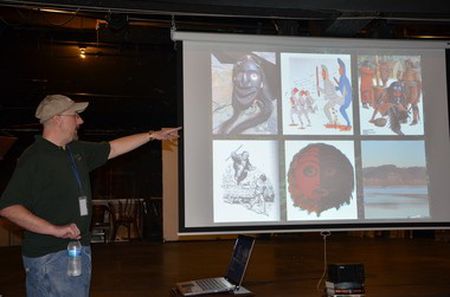 Raystown Ray and Bessie (Pennsylvania cousins to the Loch Ness Monster), thunderbirds, squonk, giant snakes of Adams County — maybe not so much.

But they, and a considerable list of other unexplained mysteries, have all been reported as being sighted in Pennsylvania.

Despite some theories that attempt to link them to Bigfoot, UFOs usually are a separate field of mysteries. And, ghosts generally fall into the realm of the paranormal, which deals with phenomena that lie beyond explanation by science or normal experience.

There can be much overlap. Even the proliferating conferences organized by and for devotees of investigation into these mysteries have been mixing the fields for many years to generate larger audiences for live events. As with many of the avocation’s events, Phenomenology 107 – this year’s seventh annual incarnation of one of the premier conferences on the unexplained, June 18-21 in York – will see a blending from all sectors, both in speakers and attendees.

The multi-day series we launch today – PennLive’s “Monsters of Pennsylvania – will follow that same path, as we talk to the people involved in these investigations, visit the places where sightings have originated and fact-check FBI Agent Fox Mulder from the 1992-2002 TV series The X-Files to learn if in fact “the truth is out there.” We’ll also take a look at the pop-culture that has grown around the unexplained.

Social media and the Internet, and the exploding number of cable television channels with cryptozoology and paranormal programming, have expanded the worlds of cryptozoology and the paranormal by many orders of magnitude in the past couple decades, according to Eric Altman, a southwestern Pennsylvania native and current resident, past director of the Pennsylvania Bigfoot Society, field investigator, conference organizer and host of the Beyond the Edge podcast and radio broadcast.

The electronic media has brought an upside of “quicker access to eye witnesses, eyewitness access to researchers and sharing of information,” he noted. “But it also allows for anybody to put information out there. It doesn’t have to be scientifically or objectively examined.”

That’s a view shared by Loren Coleman, author of 17 books and hundreds of magazine articles on cryptozoology. He is one of the most sought-after interviewees in the field, the first man to teach a college-credit course in cryptozoology and founder and director of the International Cryptozoology Museum in Portland, Maine.

In the mid-1980s, “I had very hopeful feelings” for the future impact of the Internet on the field of cryptozoology, he said. “You could instantly talk with anyone anywhere.”

But, instead, what he saw five or 10 years later, and continues to see, were “fakes going all over the Internet.”

Coleman noted, “You can hear almost instantly about real discoveries, but there are also hundreds of postings of fake bigfoot photos or a pile of garbage being misinterpreted as a water monster.”

And, audiences for all that instant-access media demand a constant flow of action and results.

“Who wants to watch a guy sitting in the woods for eight hours with nothing happening?” asked Altman, noting that his own 20 years and hundreds of in-the-field investigation have yielded actual promising experiences that “I can count on one hand.”

So, according to Altman, television and online shows are “scripted so that every time they go out, something happens.” The impression they create “really hurts legitimate research,” Altman said, which is aiming for results over many year or decades rather than in 60 minutes minus the commercial breaks.

The proliferation of misidentifications, hazy images and outright hoaxes has damaged the reputation of the field of cryptozoology, which was already widely criticized for relying on anecdotal evidence, not following the scientific method and perpetuating unproductive searches for large megafauna that most scientists believe could not exist undetected in large enough numbers to maintain a population.

And, despite the proliferation of investigators and researchers, instant electronic communications and a host of entertaining programs, little or no evidence has been produced that is acceptable to a larger community, such as scientists or even the general public.

Altman explained, “There aren’t a lot of people spending the time necessary, with the resources and the technology” needed to produce substantial results.

In addition, most researchers are self-funded and larger pots of money, such as grants, to pay for expensive investigations, like DNA testing, have been extremely rare.

And, yet, the serious, hard-core researchers like Altman and Coleman, and others we will meet in our Monsters of Pennsylvania series, continue to press on with the search. When we talked to them, Altman was driving to a promising Bigfoot spot in western Pennsylvania for an overnight effort and Coleman had just returned to Maine from a multi-stop swing that included several days investigating thunderbird reports in northcentral Pennsylvania.

Altman’s own best evidence to date? “I found footprints that are clearly larger than any human track that no one could identify as anything known.”

The best evidence Coleman has seen? “In our museum: a cabinet of classic animals of discovery,” such as the mountain gorilla and the giant squid. “A lot of cryptids of yesterday have turned out to be real animals.”

He also pointed to the “Patterson-Gimlin Film,” the 53-second, 954-frame motion picture of a purported bigfoot, shot Oct. 20, 1967, in northern California by Roger Patterson and Robert Gimlin. The film, which Coleman said lies at the heat of “multiple layers of evidence,” was the start of the popular bigfoot craze and launched an entire generation of bigfoot hunters, researchers and film-makers. It has been subjected to a never-ending stream of attempts to prove and disprove its authenticity.

And, Coleman noted, large “mystery cats” in the eastern U.S., including Pennsylvania, have left behind plenty of tracks to produce an evidentiary legacy.

Altman and Coleman looked at the list of mysteries included in our Monsters of Pennsylvania series and assessed each on the likelihood of it eventually being proven. For details on creatures you don’t recognize, you’ll need to stay tuned to our series in the coming days.

Overall, Coleman stressed, “all the word cryptid means is an unidentified animal, even a known animal that is out of place.”

Have you seen something? Share it with us in the comments below. Or, if the comment section is not confidential enough for you, contact Marcus Schneck privately at mschneck@pennlive.com.