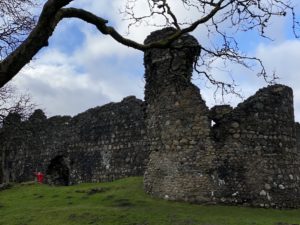 Just want to read one issue? No problem you can subscribe for just one week (or longer if you wish)

A foggy, yet eerily bright moonlit night; a group of people including the believers, the skeptics and the open-minded; a plethora of technical kit and the ruins of a castle with a 700-year history of bloody battles and many reported sightings of ghosts made for a pretty interesting Monday
evening, writes Nic Goddard.

Inverlochy castle ruins in Fort William has several local legends of shadowy figures and apparitions, reports of hearing footsteps when no one is there and paranormal presences felt by those who tune in to such feelings.

The Hove-based Findings Hauntings is a team of paranormal investigators and ghost hunters on a quest to seek out spirits, get to know ghosts, drive out demons and appraise the apparitions.

Set up nearly 10 years ago by school friends Rob Murphy-Smith and Lisa Walker, who shared a passion for all things paranormal, the team includes Rob’s husband Richard Murphy-Smith, a ‘demonologist’, and David Walsh, who is in charge of video and audio and as ‘team skeptic’ is always on the look-out for non-spooky explanations to the experiences of the group.

I spoke with Rob and Lisa in advance of the event to find out more about Findings Hauntings and what to expect on the ghost hunting evening.

Rob explained: ‘I’ve always been interested in the paranormal and became a qualified ghost hunter and investigator after years of visiting haunted locations including private homes, castles, prisons and woodlands.’

Lisa added: ‘My first experience was back when I was just nine years old and a whole shelf of ornaments turned the wrong way while I was in the room. I was a bit scared but mostly just fascinated and wanted to learn more.’

Both are keen followers of TV shows such as Most Haunted and are keen to give other interested people the chance to become ghost hunters too by joining the team on ghost hunts and explaining how to use their high-tech kit.

Rob tells me a bit about the sort of equipment the team bring with them. ‘We have voice recorders, motion sensors, infra-red thermometers to measure temperature changes, night-vision cameras and electro-magnetic field (EMF) detectors.’

‘We sometimes also use an ouija board but often just being receptive to feeling spirits is enough,’ added Lisa, explaining about a recent experience where she was drained of energy and became suddenly and unexpectedly
sick during a ghost hunt.

We gathered on Monday evening by torchlight in the castle ruins. Unfortunately, it was a wet evening with several heavy downpours of rain, but it didn’t seem to dampen spirits.

The main paranormal action was in three tower spaces in the corners of the castle. One was set up with the team’s motion sensor detector which set off an alarm at various points during the evening and had distinct pockets of cold air present.

The second tower has a semi-intact stairway closed off behind a boarded up area where several of the group heard marching footsteps.

It was in the third tower ruins where the most paranormal action was experienced, though, with the hand-held EMF detectors showing almost constant action and very clear interaction with the questions of the group.

As well as lighting up the detectors, all 10 of us experienced a strong smell of burning as the spirit of a woman called Agnes told us she had connections with someone tried as a witch.

Fellow attendees Hayley and Trevor Stevens had a particular connection with the activity detected and felt that Trevor’s late father was also present.

Trevor told me that although this was their first time ghost hunting they had been to seance events previously and connected with Trevor’s father through a medium.

Hayley said: ‘We definitely believe. We only moved up to this area last year and our children have communicated with the spirit of a woman in our new house. We’ve been to these castle ruins before in daytime but didn’t feel anything here before.’

After four hours of activity, torch batteries were dimming so demonologist Richard said a prayer and investigation leader Lisa thanked the spirits for communicating with us and expressed our wishes for them to rest in peace.

The EMFs stopped detecting energy and our ghost hunting adventures were over – for now. It had been an exciting evening and for the Findings Hauntings team of experts the real work of going back through all their footage and recordings of the evening was all still ahead, as gathering the evidence is just the start of their investigation.

The rest of us – a slightly soggy group of nine amateurs aged from 18-60 all said goodbye and left in high spirits!