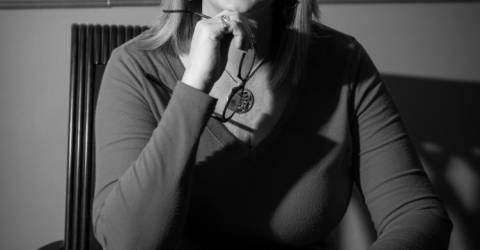 The brisk air and changing foliage means Halloween isn’t far off, with its candy binging, spooky stories, and frightful fun.

Author and Wantage resident Eleanor Wagner lives Halloween every day as she investigates and writes about paranormal phenomena in Sussex County. She’s already written “Sussex County Hauntings and Other Strange Phenomena,” Parts I and II, and is working on Part III. Each chapter examines the haunts and frights in practically every local town, like the former Playboy Club in Vernon, Lusscroft Farm in Wantage, and the Sterling Hill Mines in Ogdensburg, just to name a few.

Why would a former Bronx, N.Y., resident and kindergarten classroom aide find an interest in the paranormal? Because as a child, Wagner lived in a home that was very much haunted. The ghostly denizen was the home’s former owner from the 1920s, whom Wagner named “Uncle Paul.”

“As a child, I had to adapt to living with a spirit, and I came to embrace it,” she said.

Inspired to write by her seventh-grade teacher, Mrs. O’ Connor, Wagner combined her two passions, writing and the paranormal. She will eventually tally eight books dedicated to the paranormal in Sussex, Warren, Morris and Passaic counties in New Jersey as well as Orange County in New York and Pike County in Pennsylvania. Several of the books are still in their early stages as Wagner researches and encounters new haunted locations.

She has also penned two fiction works and a children’s book titled “Jeanine Bean Meets Mavis the Camel” scheduled for a release at a later date.

The prolific writer’s books are available on Amazon.com, Ebay and Audible. Locally, books are available at Respectrum Books, Broad Street and Black Dog Books, The Institute of Spiritual Development, Sterling Hill Mining Museum Gift Shop, Taco of the Town, Earthly Treasures in Milford, Pa., and the Card and Smoke Shop in Denville.

An autographed copy of Wagner’s Sussex County book, Part II, is fittingly signed, “All you need is love. And ghosts!

Getting ‘ghosted’ at Emerson? It’s more common than you think. – Berkeley Beacon