Home Paranormal News Are paranormal investigations in your own home a good idea? – Southside... 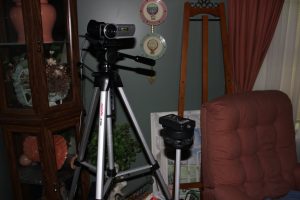 Paranormal investigators are a hearty lot, willing to explore a world of shadows and mysteries at the drop of a dime. However, when it becomes a matter of strange shenanigans in their own private residence, should they investigate? Most would say – no!

There is no better justification for investigations than helping someone in need and providing answers. But who’s going to help you when your fortress of solitude is invaded? You begin to look for reasons:

You have the initial reaction:

Now, some paranormal enthusiasts may very well embrace their house being haunted. It’s a novelty at first but that won’t last for long; any sort of rest and relaxation will be fleeting at best. Then begins the rationale – it’s dear Aunt Clara, Uncle Jim, mom or dad, so a kinship with the spirit forms, whether the association is factual or not. Investigating your own residence – especially if you’re involved – might  just take it from a dormant watchful state to a ramped-up fiesta. (They know that you know, so the fun and games begin!)

An association with a spiritual entity in your own residence becomes a personal matter, and like it or not, you either learn to co-exist, take measures to rid your home of them, or move. They may be unwelcome guests, but at the end of the day, they’re still your guests. In a strange twist, over time, they become pseudo members of the family – becoming familiar with our quirks and eccentricities; sometimes  playing off of these. They become a factor in day-to-day living. But, when suddenly you bring in a troop of unfamiliar faces with an arsenal of cameras, recorders, meters with colorful lights, and a barrage of questions, then the game changes; sometimes drastically.

It is believed investigating your own personal abode is not a good thing. For the spirits involved, it’s an intrusion; and for us, an intrusion also. Let’s face it: you have to live there after the equipment is packed away and the investigation ends. The investigation may either ramp up activity (spirits can get highly pissed off over this invasion of their personal space) or quite the opposite – they retreat into the shadows during the investigation, most likely to re-emerge after it’s over. And, most likely, not happy campers over it all!

Our residences are sanctuaries where we refuel and regroup, and for paranormal investigators, to have some semblance of a normal life beyond hunting ghosts and a world full of dark shadows and mystery. Investigating takes not only a physical, but also mental toll over time. You need time off! Yet, this balance is altered when paranormal activity hits the home abode. After all, do you really want to be on call 24/7?