Do you believe in ghosts? Do you ever feel someone is standing behind you when no one is there? Do you enjoy the occasional puff of exotic tobaccos from a hookah pipe or sipping a blue lotus tea?

If the answer to any of these questions is yes, the Euphoria Emporium Hookah Café in Spring Hill may become your new hangout.

Listed as one of the most haunted sites in Florida, the café, at 1381 Kass Circle, has a long history of strange events, according to Cynthia Oakes, who opened the popular “chill-out” spot in 2011. Two spirits (Al and Jack) are among the regulars, both of whom are friendly, said Oakes, who is a paranormal researcher, spiritualist and medium “sensitive” to such things as ghosts.

But she’s not the only one who has seen them. Numerous paranormal investigators have visited and recorded photos, video and audio they believe confirms the haunting of the café. Last year the café was selected to be home base for the World Ghost Hunting Day. Employees and patrons of the café also report strange goings-on.

Joe Gonzalez, who has worked at the café since nearly the start, was sitting outside with a friend when he heard the sound of a chair being slid on the floor inside. There was no one in the room where the sound came from, so “it freaked us out,” he said. When he investigated, the chair was not in its place.

Things moving has been common, said Gonzalez and Oakes. Pictures on the wall in the restroom have been tilted or turned upside down. Put back as they should be, they often return to their odd positions again.

Gonzalez, who performs on the piano and guitar at the cafe, said he often feels like someone is following him from room to room.

Divided into separate themed rooms, the café’s most haunted room may be the Alice in Wonderland Room. Oakes thinks some of the old furniture and decoration items she’s picked up at estate sales may have spirits attached to them. Oakes has videos of apparitions and ghostly orbs posted on the café’s Facebook page.

Halley Smith, a waitress at the café, often hears someone calling her name, though no one is there. She’s also felt the presence of something near her and once caught a glimpse of Al, who is seen from time to time briefly in jeans and white T-shirt. One of her most memorable experiences was a rapid, side-to-side blurring motion that appeared before her face. She described it as a fast waving motion as if someone were trying to get her attention.

Oakes said everyone at the café has gotten used to the paranormal activity and since the spirits are harmless, neither employees or customers ever feel threatened.

Sean Burnett, a regular customer who loves the people and relaxed atmosphere of the café, said he’s not particularly “tuned in to” the spirit world, but nevertheless has felt things in the Sultan’s Den, one of the café’s rooms that Oakes said contains a “portal” in the corner near an antique mirror.

Burnett was exhaling from a hookah pipe one evening a while back and was startled to see the smoke form a perfect smiley face symbol grinning at him.

“I’m not good are making smoke rings,” he said. “I was surprised; it was brief, but very interesting.”

Burnett said on another occasion, a person snapped a Polaroid photo of him sitting next to the reported portal in the Sultan’s Den and when he viewed the photo, the statue of a wizard behind him had a different expression and look, “more like a garden gnome,” he said.

Oakes isn’t all-in on ghosts and spirits, and said it takes a lot to convince her, but what she’s seen, heard and felt at the cage is the real deal.

“I’m a debunker,” she said. “I have to have something real to convince me.”

Oakes said her son had always been a skeptic until one night she got a panicked call at home from him when he was at the café working.

“He’s a big guy and not scared of things, but he was rattled,” she said. “He couldn’t describe what happened except that a black mass appeared in front of him and he got out of there and called me to tell me to get down there right away.”

Oakes said anyone visiting who “focuses to pick up vibes” is likely to see or feel something at the café, which hosts paranormal nights, discussions and other regular events like an occasional séance. The café’s phone number is 352-340-5057. Regular hours are 8 p.m. to midnight Thursday through Saturday, but the café is open at other times for events and appointments for reiki healing sessions and other services like meditation and reiki healing that Oakes offers. 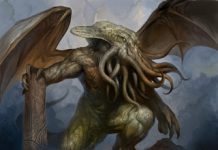 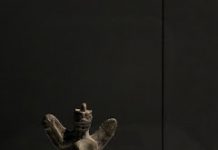 Visiting Pazuzu: A look a the demon from the Exorcist

You'll see.. RT @Emmy415: Ummmmmmmmmmmmmmm next week’s #GhostNation....@Jchawes why are you being taken away on a stretcher 😰😰😰😰