Whether you believe in ghosts and things that go bump in the night, or just want a good scare, a creepy collection of “possessed” dolls and other supernatural treasures are waiting to haunt you at a new museum set to open downtown next month.

The paranormal investigation team Ghost Storm is preparing to open The Inter-Dimensional Paranormal Museum and Study in the Conti Building at 415 Howe Ave.

Head ghost hunter/clairvoyant Nick Grossman (aka Nick Storm) can’t wait for the public to view his collection of occult items, including a faceless doll and centuries-old “pirate” liquor bottle that Grossman said has been the subject of numerous séances and much paranormal activity.

Grossman is leasing two rooms in the building: one to display his collection, and the other called The Nerve, to capture the unexplained on film. Grossman said The Nerve will feature a big-screen TV hooked up to a DVR that will record video 24/7 from four infrared cameras staged in the museum.

“Anytime even something moves a hair it will record and log it into the DVR,” Grossman said.

There will be an SLS camera in the museum, as well, which Grossman said “maps out people and ghosts in a stick-figure form” that is hooked up to his desktop computer. With his high-tech equipment, Grossman said he’s excited and ready to capture anything.

While curiosity-seekers won’t just be able to walk into the museum — there will be specific dates for tours — Grossman said he’s going use The Nerve as his study lab for research.

“Paranormal groups can book private appointments, as well,” Grossman added. “This is a great opportunity to get in contact with spirits and do paranormal research. We also have a spirit box, which sweeps through radio stations and you can hear EVPs (electronic voice phenomenon) through the white noise.”

Grossman said the Conti Building itself is loaded with spirits — in fact, he believes “the whole Valley itself has high activity.”

Ghost Storm began its adventures of tracking spirits and holding ghost tours in the Valley at the Twisted Vine Restaurant in neighboring Derby last year. Guests reported making contact with the building’s former bank owner and a bartender and seeing the shadowy figure of a child, amid flickering lights and mysterious plumes of smoke.

A ticket to the museum likely also will include a “ghost walk” in which participants can take photos and videos around the building. He believes there are “friendly spirits” lurking about the building, but they mind their own business.

Grossman also will offer, by private appointment only, an experience with The Scry Master, and a mystical art called scrying, which helps people contact loved ones from beyond the grave. The process involves someone holding a candle or light to a mirror, which Grossman said often opens a portal to the spirit realm, a centuries-old technique he said is used many in European and Caribbean cultures.

“It will be lots of fun and interesting,” Grossman said. “You will most likely have an out-of-body experience and be able to view the spirit world. The museum/lab is a perfect environment for people interested in ghost hunting, as they are welcome to interact with the artifacts.”

The museum’s grand opening is set for 7 to 9:30 p.m. Aug. 5, with other dates scheduled throughout August, so far. For tickets and more information, visit https://bit.ly/3fjKieq or Ghost Storm’s website at https://vagaparanormal.com.

Ghost Storm was established in 2004 and has investigated many supposed haunted places around the East Coast. Grossman created the team in order to authenticate reports of paranormal activity. He and his right-hand man Peter Cerow, and another crew member who trained with the famous ghost hunting team of Ed and Lorraine Warren, have investigated the infamous Dudleytown, for example, where Grossman said he witnessed a blue light flare up and felt a hand grab the back of his neck.

The Conti building was built in 1865 and was home to a corset factory. In the 1930s it was sold to B.F. Goodrich Sponge Rubber Products, and a series of passages were built. Nick Conti bought the building in 1975 and established Conti Self-Storage, the first such business in the immediate area. 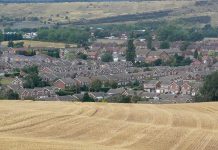 It dropped down to 93. RT @Trish_022: @Jchawes I am confused by your tweet. Are you saying your body temperature dropped to 93 degrees or that it dropped 93 degrees from what it originally was?