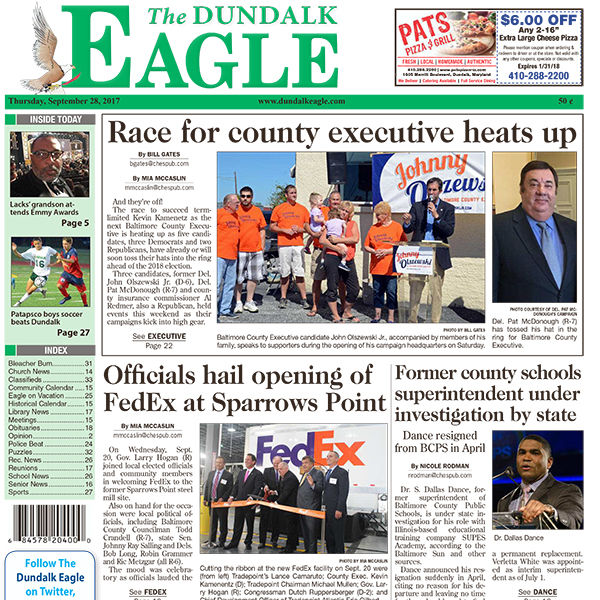 I’m one of the original “The X-Files” fans. Eagerly awaited the series premiere in September, 1993. Never missed an episode. Recorded them all on VHS. Later bought all the season DVD’s. Been reading books on the paranormal and cryptozoology all my life.

Yes, The Truth is Out There. And I Want to Believe.

Just like I fervently want to believe there will be a fall high school sports season following the announcement last week by Gov. Larry Hogan and State School Superintendent Dr. Karen Salmon.

First: Hey, governor and state superintendent? Thanks for trying to make me look like an idiot by making that announcement, like, an hour or so after I wrote last week’s column stating it was too late to start high school football in the fall.

I’ll even forgive you, if it somehow happens. And I do so want it to happen. I even miss soccer right now.

(Oh, come on. I know I’ve mentioned a couple of times over the years that soccer isn’t my favorite sport. Can’t you appreciate the irony, considering soccer is the most successful sport for local schools? I do like photographing it, however.)

Said postseason likely to be used for regional playoff or county and conference championships. So, no state titles awarded this season.

As some may recall, I wrote last week that even if the fall season started immediately, games would not begin until the end of October. Which doesn’t leave a whole lot of time to play a full season.

But a one-game postseason. Maybe a county or conference championship game.

The local school systems are still working out the details.

The real problem is, getting from now to playing actual games in four weeks is … problematic.

For starters, this decision has been made by people who don’t really know what all goes in to playing high school sports.

Among the reactions I’ve received from athletic directors (the people who do know all that goes into playing a sports season):

Most coaches are teachers. So they’ll be required to report on Oct. 7? We still need information on liability and safety protocols. What about chaperones for games (usually teachers)? Arranging officials? Setting up transportation? Making schedules?

Who gets to attend games? Do we tell some parents they can attend, while others can’t? How can we have students entering buildings to play volleyball, but not to attend class?

Patapsco, Chesapeake, Eastern Tech and Towson do not have lights. In November, it will be getting dark at 5 p.m. Do those schools start soccer and field hockey at 2 p.m.? Try to cram in everything on Saturdays?

Many schools haven’t received field paint yet. Western Tech doesn’t have a field. The county needs to start booking those community college fields (which all have lights) starting last week.

One athletic director believes there is between a one and five percent chance “we’re back on the field on Oct. 27.”

Lots of obstacles. But I’m rooting for the people who are tasked with finding ways around, through or over them.