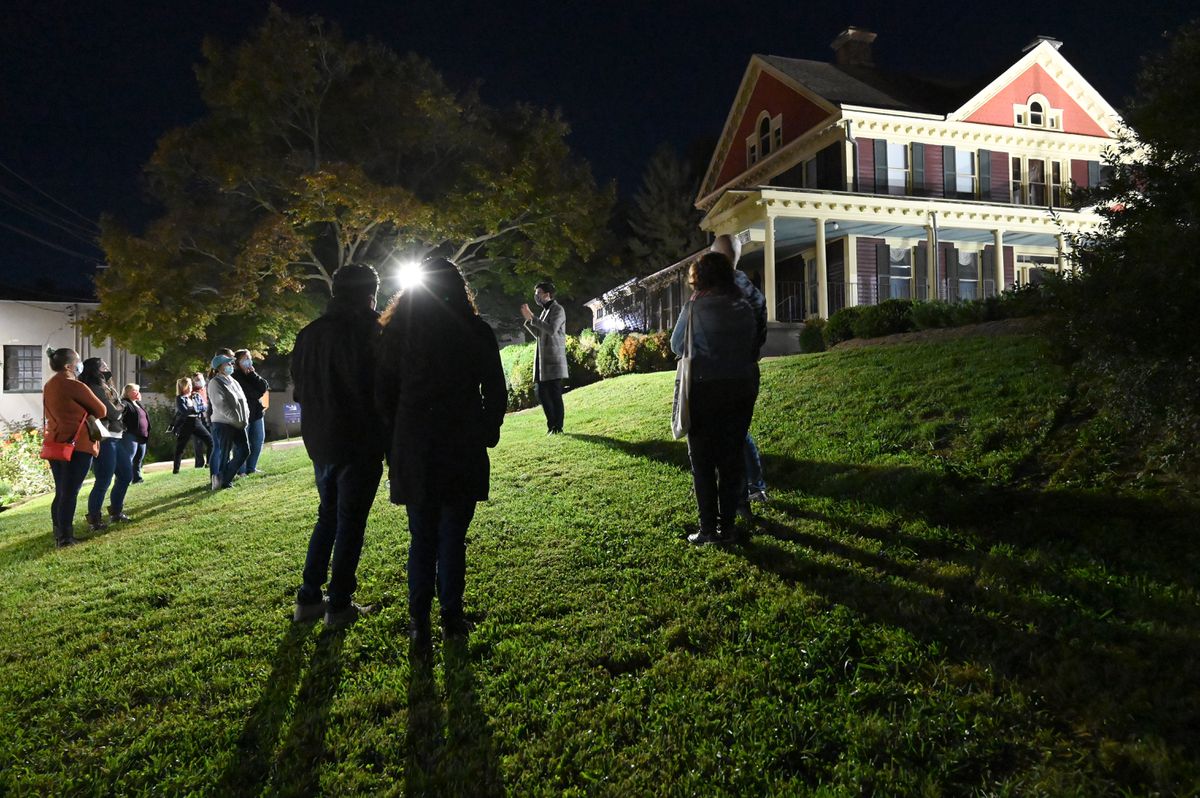 Dan Eckhart has always been intrigued by all things strange and paranormal.

Eckhart, a professional mentalist and psychic who hosts the Sykesville Ghost Tour, said this year’s tour welcomes new stories and other oddities, with plenty to keep guests entertained during this Halloween season.

“I didn’t ever want this tour to just be a collection of stories that may or may not be true,” he said. “I strive for some level of authenticity. Whenever we deal with the paranormal, we are always dealing with anecdotal accounts. For me, that was important that we researched every location and spoke with individuals who own these locations or current stores.”

The tour is just one among a variety of Halloween-related activities and spooky events throughout Carroll County for those looking for a fun night out with friends and family or a good scare.

The Sykesville Ghost Tour returns for its third year and will offer a one-hour walking tour full of haunting experiences every Thursday, Friday and Saturday in October, with start times ranging from 7-9 p.m.

Eckhart said he volunteered to host ghost walks through the town after he moved to Sykesville about three years ago. When the Downtown Sykesville Connection could no longer facilitate the tours, Eckhart branched out and started his own.

“We go through the historic district and we get to speak with local business owners about the hauntings in their locations, and see private properties that generally aren’t open to the public,” Eckhart said. “It became a really big piece for me to kind of partner with these organizations to keep the tour going.”

Eckhart partnered with Baldwin’s Station and Patapsco Distilling Company to keep the tour going, and said it has continued to be a success. This year will look slightly different, however, and Eckhart said he has implemented certain safety measures due to the coronavirus pandemic.

One of the fortunate elements of this tour, Eckhart said, is that it takes place outdoors, with the exception of the first 10-15 minutes in which guests will receive a tour briefing inside prior to starting the walk.

Each tour will be at 50% capacity and participants must remain socially distanced while on the tour. Masks will be provided if guests do not have one of their own.

“That’s the most important thing for us is we really want to first have safety for our guests on the tour,” Eckhart said. “It’s fun to see haunted things, but we don’t want any of our guests haunting anything in the near future.”

Eckhart said Sykesville is a special town with plenty of stories still to be told with some of its paranormal activity interconnecting in some way.

“Never do we really think these things mesh,” he said. “The funny thing is, the more you talk to people who have specifically been in this town and experienced a haunting at their location, they’re also the same people who later might report they ran into Bigfoot at the Patapsco [River]. We’ve had those kinds of weird encounters where individuals can see that overlap.”

Guests are encouraged to wear their costumes and roll down their car windows for this year’s Drive-Thru Truck or Treat event. Hosted by Carroll County Recreation & Parks, it will take place Oct. 31 from 3-6 p.m at the Robert Moton Center, at 300 S. Court St. in Westminster.

Children ages 2-12 will receive prepackaged treat bags prior to processing through a trail of Halloween trunk displays with their families.

All visitors are asked to stay in their vehicles at all times. The event is free and operating on a first-come, first-served basis. Those who wish to attend should RSVP at ccrecpark.org or call 410-386-2103.

Tickets are $7, or $12 for a “fast pass” admission to avoid the risk of waiting in long lines and the attraction will donate its proceeds to the Hampstead Volunteer Fire Company and MCQE Mobile Pet Pantry. Hackney Haunted opened Sept. 25 and will remain open from 6-10 p.m. every Friday and Saturday until Oct. 31.

Patrons should expect to see scares that focus on holidays such as New Year’s Eve, St. Patrick’s Day, Easter, and the Fourth of July. Jason Hackney, co-owner of Hackney Haunts, said he is working with Carroll County Public Schools to provide high school students with an opportunity for service hours as well.

Disposable gloves will be provided to guests at the entrance and there will be hand sanitizing stations locations in easily-accessible areas. Room dividers will also be cleaned after every haunt to ensure the safety for Hackney Haunts staff and guests.

Flood Zone Marketplace and Brewery in Union Bridge has some Halloween-related events coming up.

The Jack Be Little Pumpkin Art Show, for children ages 3-12, is set for Oct. 24 from 12 noon to 3 p.m. It is a free event for children to decorate pumpkins to be displayed in the Flood Zone until Nov. 1 to support its upcoming pumpkin Fundraiser. Individual art supplies and pumpkins will be provided, along with a small gift for each participating child.

Flood Zone’s Pumpkins for Pumpkins Fundraiser will run from Oct. 29 at 4 p.m. to Nov. 1 at 6 p.m. as Flood Zone partners with Tanner’s Touch Foundation to support a local child from Hampstead battling cancer. All proceeds from entries and voting donations will support The Tanner’s Touch Foundation. People are encouraged to decorate a pumpkin any way they like, and enter it to be voted on. The entry fee is $25, but additional donations by entrants are welcomed and encouraged. Email floodzonebrewery@gmail.com for donation letter requests if needed. All entered pumpkins must be delivered to Flood Zone by 3 p.m. on Oct. 29. First, second and third place prizes will be awarded for most votes.

Bedlam in the Boro, which features attractions such as a Haunted Hayride and House of Horror, was canceled for the 2020 season, according to the Lineboro attraction’s website.

The original plan to open in a modified capacity was rescinded by the Hayride Committee, officers, and members of the Lineboro Volunteer Fire Department, citing the pandemic and a lack of resources to move the attraction forward.

Bedlam in the Boro is planned to return in 2021, and the organization is asking for the community to show continued support for their smaller-scale fundraisers.

The Land of Fear, located on the grounds of Paintball Adventure Park in Taneytown, announced on its Facebook page Sept. 1 that it would also close for the 2020 season.

“Our number one priority will always be the safety of our guests and staff. Due to [COVID-19] concerns, we believe that its in everyone’s best interest to cancel this season,” the Facebook post reads. “As sad as we are to break this news, we look forward to using the extended off-season to create a game changing Haunted experience. We hope you all have a great Fall season. Stay safe!”