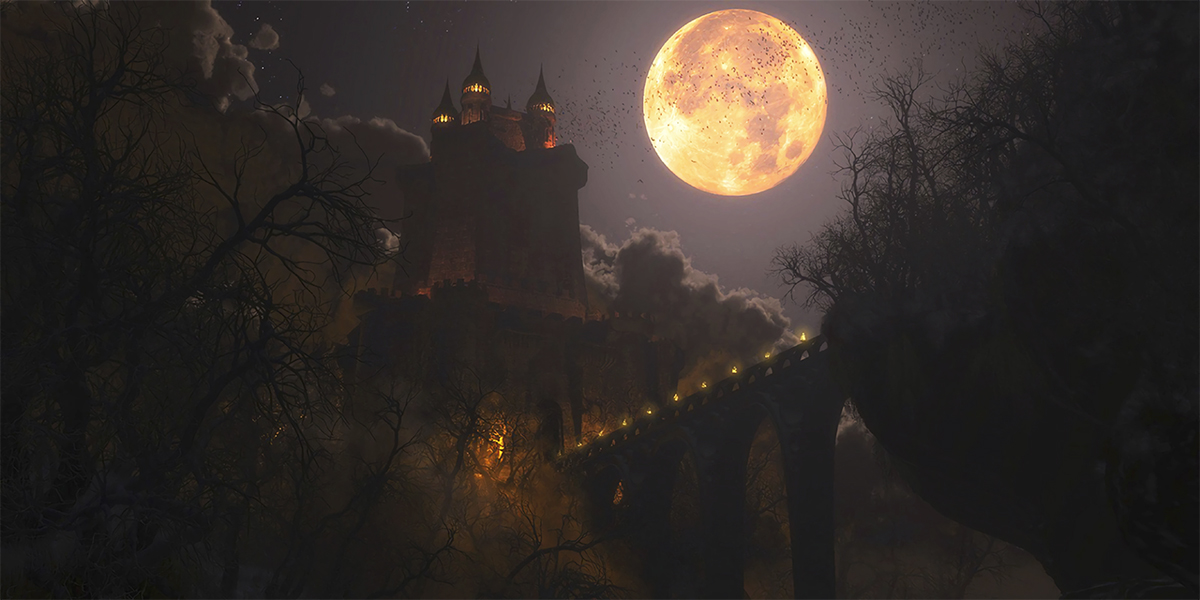 When a full harvest moon rises over the Marco River, the passage of time slows down. The moon seems bigger and brighter as it climbs above the mangroves, and when the mechanics that drive the universe lift the moon higher, the folks from Marco and Capri can see there are mountains on the moon and even a sandy ocean called the Sea of Tranquility.

It is true. The full Harvest Moon rising over our islands does seem bigger and brighter than any other time of the year, but for this autumn season, we have a second full moon of the month called the Hunter’s Moon. This lunar event only happens once every 19 years, but when it does, just as with every Halloween, The Marco Beach Boys have always had a special place for ghost stories. This is especially true because the second full moon this October will be rising on Halloween.

October ghost stories at the beach hut were always a tradition, even dating back the early days when our crew was new and we were learning to share experiences.

I was always the first to the scoff at the supernatural. Even when voodoo stories from the Caribbean and unexplained events of The Bermuda Triangle were traded around in conversation, I was the one who shook my head and said, “I don’t believe in ghosts.”

After traveling overseas to Germany, however, my days of disbelief about ghost stories and the paranormal sailed out with the tide during a very scary encounter.

Many Harvest Moons ago, I was traveling with family and friends in Germany. Our little entourage was enough to fill two rental cars with travelers and luggage, and our goal was to visit as many old castles as possible. In Germany, many castles from the 12th century are easy to discover. We especially liked the out-of-the-way castles that were off the beaten track and the very old castles where the managers and caretakers of the châteaux offered lodging for the night, and a rustic restaurant featuring local fare.

After landing in Frankfurt, our Deutschland traveling routine was fairly well established and we would set out for adventure in the German countryside. We would often stay at a castle Hammelburg and then set our course for the more distant and remote castles were quite often driving into a nearby village and asking directions was the only way to find the old fortress that was once a house of nobility.

My first experience with the paranormal generated an immediate rationalization. There must be a way to cope and there must be a logical and understandable reason for the unexplainable happening. This, I now believe, was because the first events of my scary experience happened in daylight.

After arriving at Schloss Lembeck near Dorsten, we crossed over the moat on the drawbridge and arrived in the inner courtyard. After the reception, we gathered our belongings and were shown to our individual rooms inside the waiting fortress.

Upon entering my room, which was in one of the castle turret towers, I was accompanied by a grounds caretaker who was explaining in good English that he did not ever spend the night at Schloss Lembeck.

Before he could explain the reason, the caretaker/bellman was loudly interrupted when all of the floor-to-ceiling windows in the turret began to shake and vibrate loudly. Conversation stopped during the window-rattling episode, and afterward, I instantly looked out the window for a passing aircraft traveling overhead. There was no airliner, or any other natural source for the event I could see, but after all, it was only 4:30 in the afternoon and much too early for any poltergeist activity—or so I thought.

After the shaking widows and the castle caretaker hurriedly left the room, I decided to do a quick unpacking by placing many of my personal items on an ancient bureau that served as a table. I then locked the door to the tower room and went into the modern bathroom that was an add-on improvement for “hotel guests.”

Just like everything in Germany, the turret room, the huge windows in the room, and the bathroom tiles and shower were sparkling with cleanliness. After the water started steaming and I was in the shower and soaping up, a huge crash sounded just outside the bathroom door. The crash demanded immediate attention, so with a towel around my middle, I opened the door and looked into the bedroom. The late afternoon sun was still shining, although the shadows were longer, but every personal item I had placed on the old bureau was now scattered everywhere on the floor. First, I checked the lock on the bedroom door—it was still locked from a deadbolt on the inside. I then noticed the lamp on the bureau was perfectly in place beside where my personal items had been violently scattered after I entered the shower.

Feeling strange, I then began to consider the shaking windows and the caretaker who never spent the night. After a quick mental shrug, I went back to the shower. Someone is playing a trick on me I thought, as the most seasoned traveler in our group was always talking about the haunted castles in Germany and England.

Meanwhile, back in the shower, I was scrubbing away and washing my hair. The Marco Beach Boys have always liked to shave in the shower and just because I was in Germany, I did not change the habit. This time, however, perhaps because I was rushing to get ready to tell my travel partners about the shaking windows, the crash, and the trashed clothes and toiletries, I felt a sharp stick on my chin from the razor. After the cut from the razor, a red splash of blood began washing toward the drain. This again was not unusual, but I then noticed with considerable goosebumps that some of the blood was on the white tiles of the shower. There were several trails of my blood snaking upward in a serpentine manner. Yes upward! Unlike the rattling windows, and the sudden crash in the locked room, this latest event was extremely difficult to rationalize. At this point, I was at a full stop and starring at the upward snaking blood trails that were obviously defying gravity, nature, and the steaming water from the shower that was still washing everything normal down to the drain. At once, I realized… this castle is not normal but paranormal!

There were no other poltergeist events until after dinner with the family and friends. For those ready for more scary Halloween stories, look to the Coastal Breeze next week for another round of goosebumps from the haunted castles of Germany and England.

Tom Williams is a Marco Islander. He is the author of two books. “Lost and Found,” and “Surrounded by Thunder—the Story of Darrell Loan and the Rocket Men”