A lot of the traditional Halloween festivities are cancelled this season due to the pandemic, but there are still a few COVID-safe ways to get your thrills in this fall, including a ghost tour in Staunton. WMRA’s Randi B. Hagi took the tour, and has this report on why the Queen City might just be a little more spooky than other places.

If you’ve ever driven into Staunton from Interstate 81, you may have looked up by exit 222 and noticed the stately, abandoned brick buildings looming down from the hill – the old DeJarnette Sanitarium, which was founded by former Western State Hospital director and eugenics supervillain Joseph DeJarnette – he’s one of the subjects of ghost tours led by the group Black Raven Paranormal.

DAVID SIMMS: We’ve done tours over at the DeJarnette Sanitarium, where we had like, up to 200 people a night. That was really surreal…

David Simms, originally from New Jersey, has been leading ghost tours in Staunton for eight years. He wrote a book, titled Fear the Reaper, about the sanitarium that first inspired him to research the darker side of Staunton.

SIMMS: When I moved down here, I looked at the place across from the restaurant we were at. And I said, ‘this looks like a college campus,’ and I researched it, because I teach psychology and English. And I found out about the whole eugenics thing. And then I walked through the campus and just started researching, and all of a sudden I realized, okay, I have to tell the story.

Black Raven Paranormal leads a variety of ghost tours every Friday, Saturday, and Sunday through October. According to tour guide Matt Willis, Staunton is a prime spot for hauntings and visitations of all kinds – and not just because of the sanitarium, or the thousands of Confederate soldiers who died there in Civil War hospitals. It’s also because of Lewis Creek.

MATT WILLIS: It runs under almost every building in this town … Staunton was founded on a bedrock of limestone, which is a very soft mineral, okay. And when you start getting into paranormal theories, it all involves movement of energies, and different types of energy. Limestone is littered with tons of quartz. So when you start adding in the movement of large bodies of water through capstones of quartz and limestone, well there’s an energy movement underneath this town.

One of the group’s tours is focused specifically on Civil War ghosts, such as one young soldier who can reportedly be seen on the train tracks by the American Hotel.

WILLIS: They pile out on this platform, and by all intents and purposes, he was hammered. Witnesses said he got off the train, he’s all of 17 years old, and he immediately, D.C. McClury turns around and he staggers out. There were no [guard]rails here. There’s no OSHA regulations. He goes out on the railbed there, and he’s in between the rails, and he’s staggering back and forth, looking like he had forgotten something, he’s peering down like this. And they’re screaming at him to get off the rails, because as soon as one train leaves, another one comes … so another train comes barrelling into the station. And he either was so drunk he never heard it or he never saw it.

Another tour guide, Jessie Parrott, led about a dozen participants through the lamplit streets on Saturday’s tour – Dark Tales and Haunts of the Queen City.

JESSIE PARROTT: It’s fun. It’s safe for the masks and COVID. We’re all outside, as you can tell, everybody pretty much kept their distance from each other. I have a speaker, you know, it’s something fun to do instead of being stuck at home. And plus, too, you get to be a part of the ghost hunts.

Ashlie Muñoz came out with a few friends for the Dark Tales tour.

ASHLIE MUNOZ: I wasn’t particularly scared, but I think I liked mostly the history, which I didn’t know, really, much about.

But Jessie Parrott isn’t just a tour guide, and Black Raven isn’t just a tourism company. They also conduct paranormal investigations in the area. Parrott is the team’s clairvoyant, and says she first started having strange dreams when she was a kid in Ohio.

PARROTT: My Mom took me to a psychiatrist and stuff like that, to see what the heck is going on. But my dreams started adding up, and I started finding bodies for the Cuyahoga County Sheriff’s Department. So in living there my whole life up until the last five years, I found 25 bodies, and I found 16 missing people.

Tickets for all the different tours are available through the Ghosts of Staunton Facebook page. 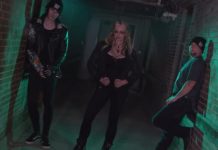