As a child, Kathy Sauer was scared by the ghost stories her dad used to tell her, yet she became more comfortable with the idea of ghosts while watching the 1950s TV show “Topper” — based on the Cary Grant movie of 1937 — in which a couple live in a home haunted by its deceased former occupants and their St. Bernard dog.

“I do believe in ghosts because it only makes sense — we are such incredible creatures, how could this be all there is?” Sauer says. “I’m also a coward, and enjoy the idea of ghosts rather than actually having them in my house.”

Sauer, who has worked in the medical field for years and has 20 years of experience as a professional writer, including freelance work for The Oakland Press, recently published her first novel.

“Distant Heart Sounds,” written under the pen name Kate MacInnis, is the first of a three-part series about Morgan Cutler, a Metro-Detroit emergency nurse who has developed the power to communicate with folks on the other side. With her enhanced psychic ability, she begins seeing, smelling and hearing unusual activity in the emergency department, and at home.

“The world is so sad right now, we could all use a laugh,” Sauer says. “This is a ghost story with a sense of humor. It is totally entertainment, because we genuinely need a laugh nowadays.”

The book not only has a sense of humor, it includes a bit of romance, too. After a near-death experience, Cutler gets involved with a hunky doctor at the emergency center, who happens to have some psychic ability, too.

“I can’t sing, dance, play an instrument, or act,” Sauer says. “This is what I have — and I wrote a book that makes me smile.” She wants people who read her book to forget about the world for a few hours and smile too.

Sauer and her husband, Bill, the love of her life, live in Oakland County and have two grown sons and three grandchildren. She earned a bachelor’s degree in journalism at Oakland University and master’s in American culture from the University of Michigan-Flint.

She became a believer in the supernatural from an early age. Aside from listening to childhood ghost stories, she dabbled with reading tarot cards in high school, spent a lifetime hearing people’s stories of paranormal experiences and experienced a sixth sense of her own.

In 1988, shortly after her mom died, her mother’s best friend called Sauer and told her not to be surprised if her mother tries to get in touch with her. A month later, that friend died, leaving Sauer letters she and her mother wrote to each other over the years. One day while reading the letters, Sauer heard a noise and noticed curtains billowing over a closed window.

“Everybody has a ghost story or unexplained experience they can share,” she says.

Sauer also heard accounts of similar stories from a medical evacuation EMT, and from nurses and residents who related seeing wisps of smoke shortly after the deaths of patients at what was known as a haunted hospital in Northern Canada.

“Were their experiences real or not? Or were they psychic? Or crazy? I cannot refute what they said,” Sauer says.

One of her favorite stories is the romantic “Ghost,” which she calls “the perfect movie.” She recites one of its most memorable lines, when Sam says, “It’s amazing Molly, the love inside, you take it with you.”

“That is how I want things to be,” Sauer says.

For her, a good day of writing begins with getting up early and sipping a strong cup of tea with milk. Add some clouds and rain to the mix, and she really gets in a creative mood. Her writing ritual includes reading over the last 10 pages of what she has already written, then writing for hours at her desk.

“It’s not all good writing, but I’m a brutal editor and clean it up as I go,” Sauer says. “No music, no TV, no interruptions, just me and the keyboard. Life is good.” 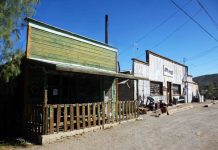