Home Paranormal News The Unlucky History of Friday the 13th 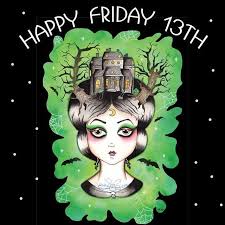 “It’s been estimated that [U.S] $800 or $900 million is lost in business on this day because people will not fly or do business they would normally do,” said Donald Dossey, founder of the Stress Management Center and Phobia Institute in Asheville, North Carolina.

So where does this fear that can cripple a nation come from? There really seems to be no consensus on the origin of Friday the 13th. Everyone has a story, but most of them are different. The fear comes from an unknown source. Here’s a look at a few of the Friday the 13th origin stories I’ve found.

One folklorist traces the origins back to Norse mythology. There were 12 gods who had a dinner party in Valhalla. A 13th guest, Loki, was uninvited. Always the trickster, Loki tricked the god of darkness, Hoder, into shooting Balder, the god of joy. Balder died and darkness descended on the earth. Joy was lost to man and from then on 13 was considered unlucky.

In 1307, on October 13, 1307, King Phillip IV of France ordered every member of the order of the Knights Templar executed on charges of high treason and heresy. King Phillip owed the Templar’s a good deal of money and they had amassed an enormous amount of wealth on their crusades. It is thought that the order was actually to strip the Templar’s of their wealth. The Templar’s were tortured horribly and forced to confess to crimes they didn’t commit. They all died, but as the grandmaster died he cursed King Phillip and the day making Friday the 13th unlucky for future generations to come.

Many believe the fear comes from the number 13 itself. According to numerologist, the number 12 is associated with completeness. There are 12 months in a year, 12 zodiac signs, 12 apostles, 12 Olympian gods, 12 tribes of Israel, 12 hours in the clock, 12 labors of Hercules. The list goes on and on. The addition of the 13 ruins perfection is utterly bad and unlucky. In many stories, the 13th guest is always a bad sign. Think Judas at the last supper and Loki in the above story. It is the number 13 that lends the curse to Friday the 13th. Combine that with the unlucky Friday, when Jesus was crucifies and Adam tempted Eve and you have a recipe for an unlucky day.