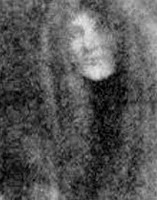 I spoke with a woman today whose name I won’t mention.  She told me about a home she had in Pell City, Alabama.   She knew there was something slightly off the house to begin with.  The realtor told her that someone had died in the house.  She didn’t have any details, but she knew the house had a history.  Almost as soon as she moved in the house, she noticed small electronic glitches throughout the home.   Her garage door opened and closed on its own in the middle of the night.  Lights flickered.  The light in her china cabinet went on and off constantly.

Despite this, she didn’t feel anything malevolent in the events so she just ignored the oddities until her daughter described seeing the ghost running through the house.  The daughter described the spirit as a woman.  At this point, the woman told the ghost to go away and she was given a reprieve from disturbances for a while.  But when the ghost came back, it came back in full force.  The next time the ghost came, she saw it.  She saw the reflection of a pale and sad woman in her mirror.  She told the ghost to go away again and it left.

She moved.  The ghost didn’t drive her out.   Life just moved her to a new location.   But despite the relocation,  the lights in the china cabinet have never been right and she still feels the ghost presence.  It doesn’t scare her.  She just describes the ghost as feeling lost and lonely.  Periodically, electrical problems will get worse and one time the china cabinet cracked spontaneously.  She believes this happened when the ghost was mad. She asked me if I thought the ghost could have followed her,  I said yes.  She agreed.  She thought the ghost felt less lonely with her.  Hauntings come and go but some ghosts follow people more than places.  Some ghosts are just lonely.

‘Ghostbusters: Afterlife’ movie review: Silly supernatural sequel is a nostalgic sop for grown-up fans, but geared to the tastes of children. – The Washington...

It’s so Hot that I think our Mailboxes can now officially double as Ovens. instagram.com/p/CgZff4fuzeG/…