Home Paranormal News A Phantom in the Woods 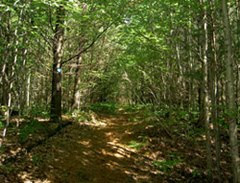 The woods near Oscoda, Michigan are filled with legends.   Oscoda is a small town near Saginaw bay by Lake Huron.   Many of these stories surround Lake Solitude.  Lake Solitude used to to be attached to Lake Huron, but the years have cut it off, isolating it and now only a trickle of water connect the lake to the larger body of water.  Near the lake are the ruins of  Au Sable, the region’s oldest settlement.   Over the years this area has become associated with witchcraft and ghosts and there are tales of many local ghosts.

The story of one of these resident ghosts was told best by a group of hunters that once got lost wandering the shores of this lake.  The hunters had gotten seperated from their group and lost their bearings.  They spent hours wandering through the woods in a desperate attempt to find anything that looked familiar.  But all their attempts were in vain and they were unable to find any help.  When they had finally given up and sat down,  a young woman seemed to appear out of nowhere.  She was lovely and amiable and the group immediated trusted her.  She explained to them that she was a local farmer’s daughter and that she knew the woods very well.   She guided them back to the safety of town.  The hunters were so greatful that they turned to thank her and then they watched her vanish into thin air.

When they got back to town,  they went to the local bar to have a beer and relax.  As they drank, they told their story to the bartender.   He knew the story well.   The ghost was well known in those parts.  The young woman’s name had been Leona and her family had once had a farm in those woods. Back in 1929, Leona had been shot and killed by a hunter who mistook her for a deer. Since then, her spirit had been seen many times, usually leading lost people out of the forest.