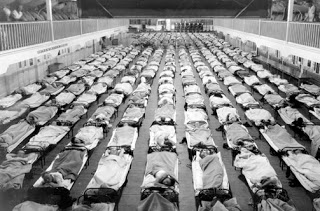 The Spanish Flu killed between 50 million and 100 million people between 1917 and 1920.   It swept the globe, killing people in every corner of the world.  It was a particularly cruel plague.  Most illnesses prey on the weak.  They take the elderly and children, but the Spanish flu was indiscriminate. It killed many healthy young adults as well as the weak. It is considered to be the second largest disaster in human history and it infected 28% of the human population and killed 3% of the global population.  It killed more people than the black plague.  Enormous Flu wards were created to care for the amazing number of sick that over ran hospitals and health facilities where the sick were lined up like cattle to wait for death.

It is no surprise that the Spanish Flu left many ghosts.   I’ve found many ghost stories related to this terrifying epidemic.  The story of Walker Street in Historic Huntsville, Alabama is one of the sadder of these tales.  According to local legend, the Spanish Flu hit Walker street with a particular cruelty.  It took mostly children, leaving entire homes empty.  So many people died that the bodies of the dead would be left on the front porch  because there weren’t enough healthy people left to bury the dead.

The ghosts of the many children that died on Walker Street during the Spanish Flu are still said to wander the streets at night.  They’ve been seen singing and playing in the shadowy dark.  They sing nursery rhymes as they play and haunt the living that have been left behind.  There is a  rhyme that the children are said to have made up.  “I had a bird whose name was Enza, I opened the window and in flew Enza.”  The children are said to still sing this little rhyme as they wander Walker Street. 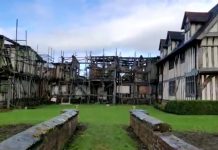