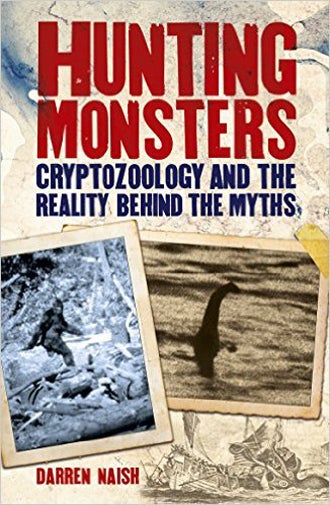 Regular readers of Tet Zoo will know that I’ve written – on a great many occasions – about cryptozoology (the hunt for creatures known only from anecdotal evidence and not thought by the majority of scientists to truly await discovery as valid zoological entities). And I’ve written about various specific cryptids – the mystery beasts that are the alleged targets of cryptozoological investigations – on some number of occasions too.

But for all this, I’m surprised to find – even after more than 12 years of blogging – that there are a huge number of cryptozoological subjects that I haven’t ever covered at Tet Zoo at all. Purely because I’ve never actually said much about it before, I want to talk here about mokele-mbembe, the alleged ‘living sauropod’ of the Congo. This text is culled from the appropriate section of my 2017 book Hunting Monsters (a 2016 ebook version also exists) but is slightly modified and includes the references that couldn’t be cited in the book itself (Naish 2017). This brief article is not a definitive history of the mokele-mbembe and everything about it, but merely a part of the story.

By far the best known of the alleged mystery beasts of tropical Africa is the mokele-mbembe of the Congo, an elephant-sized water beast, said to be a long-necked, long-tailed, herbivorous creature that lurks in deep forested swamps and forest-fringed lakes. It sounds very much like a sauropod dinosaur – or, more specifically, a mid 20th century, amphibious, fat-bodied, thick-limbed sauropod of the sort so prevalent in old, inaccurate artwork – and the notion that this is exactly what it is has been endorsed and discussed in many cryptozoological books and articles.

The idea that the Likouala-aux-Herbes region of the Republic of the Congo might be home to such a beast has been a popular, persistent one ever since the early 1900s. The great animal dealer and showman Carl Hagenbeck was among the first to promote the concept of living dinosaur-like reptiles in Africa, and his claim (made in his 1909 book Beasts and Men) immediately received global interest. It became a mainstream idea, publicised and promoted by ‘father of cryptozoology’ Bernard Heuvelmans and his followers from the 1950s onwards. Heuvelmans wrote a book on these creatures, published in French in 1978 as Les Derniers Dragons d’Afrique – and as yet not translated into English (though republished in 2003). Roy Mackal also wrote about them and his 1987 volume A Living Dinosaur? In Search of Mokele-Mbembe (which has a foreword by Heuvelmans) is a cryptozoological classic (Mackal 1987).

The cryptozoological perspective mostly holds that Hagenbeck’s stories originated in genuine eyewitness encounters with unknown animals. However, there’s an alternative cultural and sociological perspective. Hagenbeck was almost certainly taking advantage of an early 20th century dinosaur craze that was sweeping the globe at the time. Thanks to palaeontological discoveries made in the western interior of the United States during the late 1800s, the museums of the day were racing to obtain and install complete skeletons of Diplodocus, Brontosaurus, Apatosaurus and their relatives. Huge fanfare and public interest surrounded the display of these dinosaurs (Brinkman 2010), the very first of which were mounted in New York and London in 1905. Interest in fossil sauropods fuelled interest and excitement in living ones – hardly the first time that such a pattern of association had occurred (a claim has been made that the discovery of fossil plesiosaurs inspired sightings of long-necked sea monsters… an idea I’ll be coming back to soon), and hardly the last. It should be added that African legends and stories about giant monsters of course existed long before this time. However, none of the stories describe animals that sound much like sauropods.

What many proponents of the ‘living sauropod’ idea seem to have missed is that the half-rumoured notion of surviving African sauropods originally had nothing to do with the Congo region, but actually concerned Rhodesia – today known as Zimbabwe. Zambia, also in the far south of the continent, was said to be home to sauropod-like beasts during the early 1900s, as was the edge of the Sahara Desert and South Africa (Loxton & Prothero 2013).

In effect, people latched on the idea that any wild region in Africa might be home to living relatives of Brontosaurus or Diplodocus. Sauropod-like monsters were not special denizens of the Congo region alone, but examples of a sort of lazy, naive view common in Europe and North America whereby all of Africa was imagined as a homogenous dark continent stuck in the Stone Age, inhabited wholly by spear-wielding jungle-dwellers, and where little had happened since the Mesozoic Era. Indeed, an oft-repeated phrase made in connection with the idea of surviving sauropods is that “Africa has scarcely changed since the time of the dinosaurs”. Even the most cursory examination of Africa’s fossil, geological or tectonic history will show that this is completely incorrect. Dynamic phases of mountain-building, continental rifting and desertification have had huge impacts on African animal life (e.g., Kingdon 1990), and numerous places in the continent have acted as so-called ‘species pumps’ – areas where high numbers of new species have evolved and from which they have dispersed. Such successful mammal lineages as elephants, humans, porcupine- and cavy-like rodents, and spiral-horned antelopes originated in Africa, often spreading out from the continent to colonise regions elsewhere. Even the great rainforests of central and western Africa have fluctuated massively in size and position, so much so that they were largely replaced by savannah during the last ice age (Malhi et al. 2013). Vertebrate species of rainforests are Cenozoic novelties, not Mesozoic relicts (Plana 2004). Disclaimer: there are tropical African arthropod groups – like tick beetles – that do indeed appear to be Mesozoic relicts (Murienne et al. 2013), but they’re tiny arthropods, not giant vertebrates. All of this makes a mockery of the idea – popular in the cryptozoological literature – that Africa has been a static, stable refugium for many millions of years, inhabited by unchanged animals of Mesozoic grade.

In short, the concept of the mokele-mbembe as a living sauropod seems to have originated as a consequence of both a ‘dino-mania’ craze sweeping the world during the early 1900s, and of crass, erroneous stereotyping of African biological history – a view of Africa as somehow more ‘prehistoric’ than the rest of the world.

And for articles on actual sauropods, see…

Naish, D. 2017. Hunting Monsters: Cryptozoology and the Reality Behind the Myths. Arcturus, London.

Plana V. 2004. Mechanisms and tempo of evolution in the African Guineo–Congolian rainforest. Philosophical Transactions of the Royal Society of London B 359, 1585-159410.