Tim Ellis, owner/operator and morning show host at Eagle Radio 95.1 also co-founded the Upper Peninsula Paranormal Research Society. He shares information about some of the most haunted places to visit in his region. Most of them would be worth a visit no matter what, including Museum Ship Valley Camp, a 550-foot-long ore freighter. Launched in 1917, the ship spent half a century on the waters of the Great Lakes and now has a definite ghostly vibe.

“Multiple times, people ask if this place is haunted, because they’ve heard or seen something when no one was there,” Ellis said.

When it comes to seriously haunted, Ellis said Gulliver, an old fishing village, the nearby Seul Choix Point Lighthouse, and Whitefish Point are like Disneyland for his team, when it comes to paranormal activities.

The latter is in Paradise, at the east end of the 40-mile Shipwreck Coast, a stretch of treacherous waters and rocky shore that have left behind 50 or so ghosts. It’s doesn’t help that the nearby Great Lakes Shipwreck Museum display contains artifacts from the wrecks, including the large bell of the Edmund Fitzgerald made famous in Gordon Lightfoot’s song.

“It’s a heavier energy there, not frightening but you can feel it,” Ellis said, noting that one predominant spirit is that of a young Native American girl. His heavy energy is spooky to many of us. 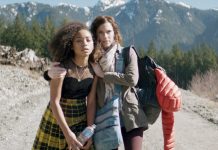