EAST LONGMEADOW, MA (WGGB/WSHM) — On Friday night, the day before Halloween is the perfect time for a good ghost story, or in this case, a ghost hunt.

Recently, Western Mass News tagged along with Agawam Paranormal for our annual ghost hunt, searching for spirits in the night inside a 140-year-old house on Maple Street in East Longmeadow.

A familiar sight in late October, as members of Agawam Paranormal, go over the night’s plans at founder Rob Goff’s house. They’ve been to the East Longmeadow home twice before, hunting ghosts.

“So, tonight we’re going to be running with two teams. Team one and team two,” Goff explained.

Luckily, our destination allowed for plenty of room to keep our distance.

The home is a large and somewhat intimidating building, the Norcross House in East Longmeadow, built in1884.

“The Norcross family was locally famous. They owned a quarry for a couple of generations if I remember correctly, and they lived in this home,” he said. “This was their summer home, and they would commute, if I remember, from Worcester.”

Several generations lived and died, at the home Jonas Norcross had his funeral in the house. The Norcross family later sold the property in 1949.

For the next five decades, it would change purposes and owners until eventually falling into disrepair. Threatened with demolition – the home was saved in 2003 by a non-profit preservation group called the “Friends of Norcross.”

“A group of people got together to raise some money to buy it and restore it,” explained friends of the Norcross family, Donna Martinez and Jo Miller.

Restore it they did, bringing it back to its former grandeur. A house the Norcross family would recognize and be proud to call home, and perhaps some of their departed members still do, but preferring things stay quiet and dark.

“You got a basement, very active for us,” Goff said. “You have the main floor, and then you have another floor upstairs with the bedrooms.”

Like the strange light in the upstairs bathroom. Unexplained certainly, but not the only weird occurrence.

That night, the carriage house was out back and served as central control, monitoring point for the night vision cameras and motion detectors set up across the entire building. It’s a place Goff was all too familiar with…

Earlier that night, Goff set up equipment in the carriage house when someone, or something, got a little fresh. But when he quickly turned around, he was standing alone.

“Now I’m standing, so I’m slightly bent over to work on my laptop. I got goosed. That’s the only way you can say it, he explained: “I thought it was my wife behind me playing games, and I quickly snapped to turn around.

There was nobody within eight feet of me.”

Perhaps it was a positive sign of, otherworldly, activity.

But as always, before any investigation begins, the prayer of protection, without holding hands, but this year with masks.

With that, we were off two teams, three floors, one goal.

“We’ve got a nice, well rounded, very experienced group,” Goff noted. “I’ll be curious to see what we get.”

That didn’t take very long either because, after 9 p.m., the night vision camera in the living room picked up this orb, appearing out of the door, that moved up to the ceiling.

Two minutes after that, an orb comes zooming through from right to left.

Upstairs on the second floor, a team member snaps pictures of various electromagnetic field meters, picking up a steady signal next to this painting of a child.

One of the investigators asked a question, and while we didn’t hear an answer, the more sensitive voice recorder picked up this:

Later, in the same bedroom, this orb shoots straight up from the bed, disappearing into the ceiling.

Is all this proof of a haunting? Do members of the long-departed Norcross family still wander their old house on Maple Street?

That’s for you to decide.

“It’s potential evidence that’s gathered on multiple occasions from different pieces of equipment, and you just put it all together, and at the end of the day, you draw your conclusion, and you go from there,” Goff said. 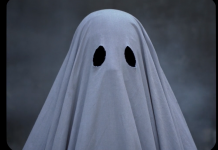 The Best Movies About Ghosts, From ‘The Haunting’ to ‘The Others’ – IndieWire 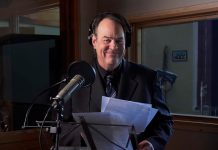 Why Christmas ghost stories have such enduring appeal – The Conversation UK