This is just what the doctor ordered in these days of gloom and doom. Truth Seekers is a jolly blend of genuine scares and laughs. While there are dark, dank, scary spaces, decapitations, eye piercings and angry ghosts that refuse to pass over, there are also people insisting a book (written in human blood on human skin) is “worth 1000 ditties by that twat Milton”.

Also Read: Get ‘First Day First Show’, our weekly newsletter from the world of cinema, in your inbox. You can subscribe for free here

There is also a senior citizen who doesn’t believe in wearing underpants and confuses dimension with dementia. Calling the mental asylum, a loony bin is “insensitive to homicidal maniacs”, a question of whether one is dead or alive is met with a reproving “don’t be so binary” and there is the quote of course from everyone’s favourite ghost story, Hamlet—hoist by their own petard. Oh joy!

Gus Roberts (Nick Frost) is the number one broadband installer for SMYLE internet in the UK. He is not particularly happy when his boss, Dave (Simon Pegg) asks him to mentor a new recruit, Elton John (Samson Kayo). Gus is interested in paranormal phenomena and hosts a YouTube channel, Truth Seekers, investigating hauntings and the like.

Though Elton John (his real name is Lionel Richie!) is not very enthusiastic about the paranormal, strange things seem to happen around him: from the haunted dog to the World War II soldier inside a signal jammer. Astrid (Emma D’Arcy) is a mysterious, anachronistically dressed young woman, who is haunted by a variety of burning people. Gus and Elton try to help rid her of her ghostly followers.

Elton’s sister, Helen (Susie Wokoma) is a successful YouTuber but is agoraphobic. She finally conjures up the courage to enter the Coventry Collectibles & Cosplay Convention. Gus goes to the convention to hear his idol, Peter Toynbee, (Julian Barratt) speak but instead of getting into the seminar hall, it is his irascible father-in-law, Richard (Malcolm McDowell) who gets in.

All hell breaks loose on the day of the eclipse when the conditions are just right to do dreadful deeds. The Truth Seekers have to stop the earth-shattering events by providing 100 percent broadband coverage. Internet does have the power to change the world! The charmingly named episodes (“The Haunting Of Connelly’s Nook,” “The Girl with All the Ghosts”, “The Revenge of the Chichester Widow” or “The Ghost of the Beast of Bodmin”) are just the right length not to overstay their welcome.

Pegg was quoted as saying “the key with horror comedy is to take the horror completely seriously and allow the comedy to exist adjacent to it”, and that is what makes Truth Seekers, such a charming watch. That the cast and writing are excellent is a welcome bonus.

Dining with ghosts: These are the most haunted restaurants in New Jersey – NorthJersey.com 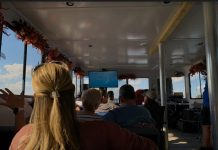