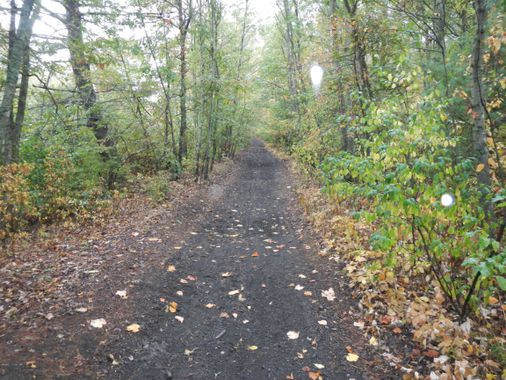 In an exclusive last week, Deadline.com reported that FX has acquired a short story titled “The Bridgewater Triangle” and plans to develop it into a television show.

Details are as thin as a spectral being for now. But Noah Hawley, the force behind the television series “Fargo,” and his company 26 Keys Productions, are reportedly executive producing what’s being described as an “apocalyptic horror thriller.”

The show would center on three siblings who must unite and confront a confluence of paranormal events, Deadline.com reported.

A spokesperson for FX confirmed in an e-mail to the Globe that the information in the Deadline story is correct but said the network has “no further information at this time.”

“The Bridgewater Triangle” refers to an area bordered by the points of Abington, Freetown, and Rehoboth. More than a dozen other municipalities fall within its mystical bounds.

The name for the uncanny zone was first coined by famed cryptozoologist Loren Coleman more than 40 years ago and is a play on the mysterious section of the Atlantic Ocean where boats and airplanes have reportedly vanished, known as the Bermuda Triangle.

Coleman, founder and director of the International Cryptozoology Museum, in Portland, Maine, said while going to school full time in the 1970s, he began investigating “creature reports” from the area.

He later mapped out where the strange activities had been reported. Eventually, he connected the dots and realized all of the alleged sightings — UFOs, birdlike creatures, large snakes, man-beasts — were entrapped by the space.

“It was very obviously a triangle,” Coleman said. “I was just putting all of the pieces of data together, and that’s why I came up with the word ‘Bridgewater Triangle,’ just to give a handle to people that want to read about it, or wanted to talk about it.”

The Hockomock Swamp, part of a network of wetlands, creeks, rivers, and ponds that span thousands of acres, is perhaps the most infamous part of the triangle.

According to Globe archives, the Wampanoag tribe gave the spot, which falls within Bridgewater, Easton, Norton, Raynham, Taunton, and West Bridgewater, its name, meaning “place where spirits dwell.”

The habitat has been called the “beating heart” of the triangle and is rich with history. According to the Massachusetts Historical Commission, “the archaeological sites in the vicinity of this wetland complex are known to span a period of 9,000 years.”

Stories about Hockomock’s “inhabitants” have thrived for generations and include sightings of “vicious, giant dogs with red eyes seen ravenously sinking their fangs into the throats of ponies; a flying creature that resembled a pterodactyl, the dinosaur that could fly; Native-American ghosts paddling canoes; and glowing somethings hovering above the trees,” the Globe reported in a 2005 story about the swamp.

Reports of a Bigfoot-like creature wandering the thickets and brambles have also been a constant theme throughout the years.

The announcement that a show will probably cast a spotlight on the Bridgewater Triangle has people who live within it — as well as those who have spent time researching or exploring it — looking forward to seeing how its myths and legends could come alive on the small screen.

“I’ve certainly heard about the FX show,” Marilee Kenney Hunt, Bridgewater’s town clerk, said in an e-mail to the Globe, “and shared the news with family members across the country.”

In a private Facebook group called “Bridgewater Residents,” which boasts 18,000 members, people expressed interest in being part of the project if filming takes place in the state.

“If ANYONE sees a casting call for this, PLEASE let me know,” one person wrote on the page recently.

Another said, “Put me in coach.”

When a Globe reporter posted in the group, asking whether there’s talk in town about the series, more than 100 comments followed, with a handful of people offering to tell their own stories.

“This will raise the national profile of the Bridgewater Triangle,” he said in a telephone interview. “We were surprised, but very pleasantly surprised [by the news].”

While the duo’s 90-minute film has no direct affiliation with the story FX apparently acquired, Cadieux offered up their expertise on the subject matter, if needed.

“We would be happy to talk to them or consult with them in any way that we can. It’s just exciting,” he said. “Selfishly, I hope people will find their way to our documentary.”

Coleman, the cryptozoologist, said he hasn’t been in contact with FX either, but he’d also be willing to talk about his ties to the region and the title he coined.

“That would be fun,” he said. “It’s something that if they do a good job writing it or acting in it, I’d watch it — because I came up with the name.”