There are a lot of different ways to adapt fiction into graphic-novel form, but there may only be one way to adapt the work of H.P. Lovecraft. At least, that’s how it feels after reading Gou Tanabe’s take on Lovecraft’s novella At the Mountains of Madness. Tanabe’s approach is so spot-on, it makes every other attempt to draw Lovecraft (of which there have been no shortage over the years) seem ill-advised.

But then, Lovecraft is a particularly knotty property — the guy’s main villain is a giant octopus, for Pete’s sake. You have to be an awfully self-confident artist to believe you can infuse a bunch of tentacles with world-shaking menace. Lovecraft’s effects rely on his prose, as in this description of the shoggoths, an ancient, obscurely evil species from outer space: “viscous agglutinations of bubbling cells — rubbery fifteen-foot spheroids infinitely plastic and ductile … more and more sullen, more and more intelligent, more and more amphibious, more and more imitative — Great God!” Readers either shudder deep in their marrow at passages like this, or they roll their eyes. If you have the former reaction, no artist’s creation can top the word picture Lovecraft has spun. If you’re in the latter camp, no drawing will make 15-foot spheroids scary.

Or maybe, this time, it will. Tanabe isn’t just a skilled artist, he’s a canny one. Particularly well-known in Japan for his manga adaptations, he’s got a history of pulling from unexpected source material — Maxim Gorky, Anton Chekhov, early-20th-century silent film — and he’s transformed Lovecraft’s works before. In 2018 he snagged an Eisner nomination for H.P. Lovecraft’s The Hound and Other Stories. He’s clearly thought about the powerful effect he can have by reining in his own personality. Here, he eschews any sense of the exotic or occult. His style is matter-of-fact, resisting extraneous drama even as Lovecraft’s story grows ever more febrile.

This is the second in Tanabe’s two-volume treatment of Lovecraft’s novella, which follows a research team from that vaunted institution, Miskatonic University, on a journey to Antarctica. In the first volume, a small advance group discovers 14 strange, remarkably old fossils of a type never before encountered by science. But when the main expedition catches up, they find the advance camp destroyed, almost everyone massacred — including the guide dogs — and odd traces left behind: Some of the fossils have been buried beneath star-shaped mounds of snow, a man and a dog have been dissected, and one of the researchers is missing.

As volume 2 opens, two of the explorers decide to use a small plane to travel beyond the nearby mountain range, hoping to find the missing man and discover what happened at the camp. Needless to say, they get more than they could have possibly anticipated. Discovering an ancient city, they stumble upon the millennia-old, intergalactic species known as the Great Old Ones. All the Lovecraftian hallmarks are here: History dating from eons before the dawn of humanity, scientists quoting Poe, cryptozoological monstrosities and excerpts from the fabled Necronomicon.

Tanabe handles all this coolly, with thin, clean lines and delicate grayscale shading. His depictions of Lovecraft’s monsters have a scientific quality, as if they’re being drawn from photographs. The space-opera elements of the story are more emotionally tinged, but mostly the drama comes from Lovecraft, not Tanabe. That restraint is well done, since the original text has drama and to spare. Tanabe incorporates plenty of Lovecraft’s trademark descriptive prose, using a slightly curly typeface that blends nicely with the art. The book would have felt shortchanged without all those words, as if the author wasn’t fully present.

That said, Tanabe’s main achievement is making Lovecraft’s monsters look suitably awesome. Even if you’re not particularly impressed by the idea of 15-foot spheroids, much less starfish-headed ridgy things with tentacles (always the tentacles!), Tanabe’s renderings still prompt a certain wonderment. It’s kind of amazing how effectively he manages to modulate Lovecraft’s histrionics over the course of the story, beckoning even less-than-susceptible readers to contemplate the author’s themes.

One of these themes — strikingly, coming from a man who questioned the humanity of many members of his own species — is the idea that giant ancient space starfish aren’t all that different from us. It’s quite a departure from Lovecraft’s well-known horror of the Other, and it makes At the Mountains of Madness all the more interesting. When you’ve been confronted with Tanabe’s way-out drawings of the Old Ones, it’s fun to grapple with Lovecraft’s brow-furrowing declaration that “these creatures were not evil things. Only men of another age, and another order of being … monstrosities, star-spawn — whatever they had been, they were men!“

Etelka Lehoczky has written about books for The Atlantic, The Los Angeles Review of Books and The New York Times. She tweets at @EtelkaL.

You make MPR News possible. Individual donations are behind the clarity in coverage from our reporters across the state, stories that connect us, and conversations that provide perspectives. Help ensure MPR remains a resource that brings Minnesotans together.

Donate today. A gift of $17 makes a difference. 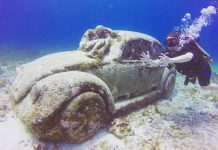