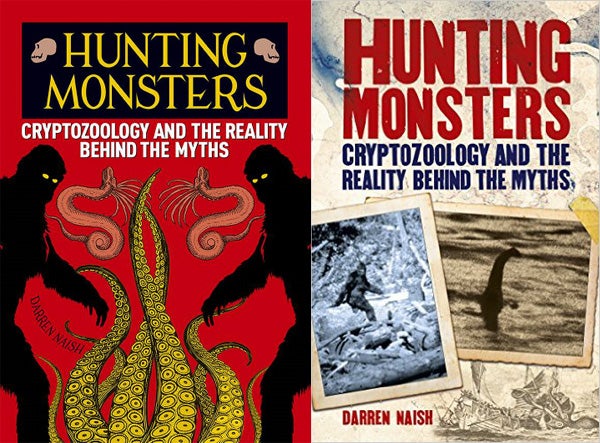 Regular readers will know that I recently published a book on cryptozoology, titled Hunting Monsters (Naish 2016). You can buy it here. At the time of writing it’s only out as an ebook but in just a matter of weeks it’ll be available in hardcopy too. Purely because it’s an interesting story that I’ve promised to cover here for quite some time, find below the section from said book on the Minnesota Iceman – a story that will be familiar and tedious to some of you, and wholly novel and alien to others of you. I’ve added references to the text (these are not present in Hunting Monsters for style reasons) and have altered it slightly such that it works better as a stand-alone article.

The illustrations used here are also not present in Hunting Monsters. In fact a startling and frustrating fact about this case is that none of the pictures famously associated with it are available free, under a creative commons licence, online… everything is protected by copyright. I’ve noticed this about images pertaining to bigfoot as well; there is strikingly little philanthropy going on as goes image sharing and so on. I’ve therefore created some Minnesota Iceman images of my own and am releasing them online as public domain images.

I should also add that – since Hunting Monsters was written – an English translation of Bernard Heuvelmans’ text has appeared, titled Neanderthal: the Strange Saga of the Minnesota Iceman (Heuvelmans 2016). At the time of writing I haven’t seen it. Anyway, without further ado…

The odd bones, hairs and so on sometimes said to be evidence for Bigfoot or the Yeti are a far cry from the most remarkable piece of data associated with the so-called crypto-hominids – the complete carcass of a hirsute male hominid, 1.8 m tall, preserved in ice and transported about the United States as part of a travelling exhibition belonging to Frank D. Hansen. At this time – late 1968 – the specimen was known as the ‘Siberskoye Creature’.

The specimen was brought to the attention of cryptozoologists Ivan T. Sanderson and Bernard Heuvelmans by aspiring naturalist Terry Cullen. Cullen had observed the carcass at the International Livestock Exposition’s annual fair in Chicago. Hansen claimed that he was only the temporary ward of the body and that it belonged to an undisclosed owner (widely rumoured to be actor Jimmy Stewart). At one time Hansen claimed that the body had been discovered floating in a block of ice off the Siberian coast by a Russian seal-hunting vessel. Later, he said that a Japanese whaling ship found the body. Later still, he said that it had been found in a deepfreeze facility in Hong Kong (Heuvelmans 1969, Sanderson 1969, Napier 1973, Shackley 1983, Coleman & Clark 1999). And later still it was said that the animal had been shot on a hunting trip in the Whiteface Reservoir region of Minnesota. For all these suggestions, the most popular idea about the body’s origin is that it was collected in Vietnam and flown to the United States in a body bag. Heuvelmans connected it with the story of a ‘huge ape’ killed in Danang, Vietnam, in 1966, supposedly close to where Hansen had been stationed during the war.

Sanderson and Heuvelmans examined the iceman in December 1968 at Hansen’s home where it was being stored off-show for the winter. Both became convinced of its reality, so much so that they prepared detailed illustrations and planned to have the creature described in the technical literature. The body was that of a robust, barrel-chested male with a thick neck and large hands and feet. Its face was broad, flattened and possessed a short, upturned nose and prominent brow-ridges. An eyeball dangled from one of the sockets, apparently resulting from a gunshot to the back of the head, and a bend in the forearm was interpreted as evidence for a fractured radius and ulna. Sanderson and Heuvelmans were intrigued by its enormous hands. Its thumb was slender, tapered and long, its nails were flat, yellow and of an appearance that almost looked manicured (Sanderson 1969), and a heel-like pad was present on the palm’s outer side, a feature suggested by Sanderson to be indicative of habitual quadrupedal behaviour (Sanderson 1969). At one point during the examination, the glass over its case cracked, releasing an odour described as that of decomposing flesh.

This object has been known ever since as the Minnesota iceman. Sanderson and Heuvelmans both spoke about it in the media, Sanderson making the unfortunate decision to refer to it as ‘Bozo’. This seems oddly unhelpful given his apparent belief that it was real. Heuvelmans published a 1969 paper on it in a Belgian scientific journal, identifying it as a new species of the human genus that he named Homo pongoides, meaning ‘ape-like man’ (Heuvelmans 1969). He later modified this proposal, arguing that H. pongoides was a form of living Neanderthal. His ideas were explored in detail in his 1974 book L’Homme de Néanderthal est Toujours Vivant, co-authored with Russian historian, economist and cryptohominid expert Boris Porchnev.

John Napier, a primatologist at the Smithsonian Institution with a serious interest in cryptohominids, was invited to examine the iceman. He became sure that it was a latex model. Hansen’s dodge for this was that he had withdrawn the original, genuine specimen from display (mostly from fear of being found guilty of killing what might have been a form of human) and replaced it with a model. Sanderson supported this by saying that the specimen examined by Napier was obviously different from the original one he and Heuvelmans had examined. Photos show that, over the years, the form of the face and body varied somewhat. In some photos, the mouth is closed, and in others it’s open, clearly revealing a complement of large teeth. Maybe there was more than one model, and some of the models looked more realistic than others, but it also seems possible that as the model used by Hansen was defrosted and frozen again for each annual outing, it would have taken on a slightly different pose and appearance each time.

The sceptical view of the Minnesota iceman has always been that it was a hoax – the latest in a long tradition of displaying enigmatic, memorable sideshow exhibits that are implied to be real. In 2013, what appears to be the original and genuine article was offered for sale online. Today, the Minnesota iceman is owned by Steve Busti of the Museum of the Weird in Austin, Texas, and certainly looks identical to the specimen discussed and illustrated by Heuvelmans and Sanderson. Its hoaxed nature doesn’t exactly leave Heuvelmans or Sanderson looking all that credible as scientists.

What makes the Minnesota iceman case especially interesting within the context of cryptozoology as a whole is how it was interpreted by supporters of its reality. Thanks to Heuvelmans’ influence, the concept of a dark-furred, Asian cryptohominid with an upturned nose, distinctive facial, hand and foot anatomy, and a barrel-shaped chest has caught on. Cryptohominid researcher Helmut Loofs-Wissowa argued in 1994 that images from ancient art were consistent with this description, and hence that knowledge of Homo pongoides has been influential throughout human history (Loofs-Wissowa 1994).

Of course, wherever we search in the world there are legends, stories and – often – claimed sightings of wild, hairy people, so it isn’t surprising that various semi-legendary Asian creatures were linked to this concept and suggested as possible representatives of the same sort of animal. A large number of wildman reports collected from the Caucasus in the west to Mongolia in the east by cryptohominid researchers Boris Porchnev, Dmitri Bayanov and Marie-Jeanne Koffman have been said to be uncannily similar to Homo pongoides in anatomy and therefore interpreted as sightings of the exact same species. In addition, more than 20 reports collected in northern Pakistan by the late herpetologist Jordi Magraner and pertaining to a wildman known as the bar-manu have also been regarded as descriptions of Homo pongoides, the witnesses again reporting a long list of features regarded as consistent with this creature’s appearance (de Sarre 1996, Raynal 2001).

Magraner’s investigation and analysis has been regarded as a great triumph of the cryptozoological method, and as a demonstration of the fact that Homo pongoides and the Minnesota iceman are valid biological entities. Similarly, Loofs-Wissowa’s ideas about hominids of this sort being depicted in art have also been regarded as providing support for the existence of this creature. But the iceman was a model, and thus the species and the traits associated with it evaporate as anything meaningful in biological terms. Where does this leave all those reports that ‘match’ it in description?

We have to conclude that everything written about pongoides-like hominids encountered in ancient art and real life is erroneous – that people were picking and choosing those features that matched the pongoides concept, and being led astray by a mistaken assumption that it was a real animal.

For previous Tet Zoo articles on Hunting Monsters and other relevant topics, see…

Sanderson, I. T. 1969. Preliminary description of the external morphology of what appeared to be the fresh corpse of a hitherto unknown form of living hominid. Genus 25, 259-278.