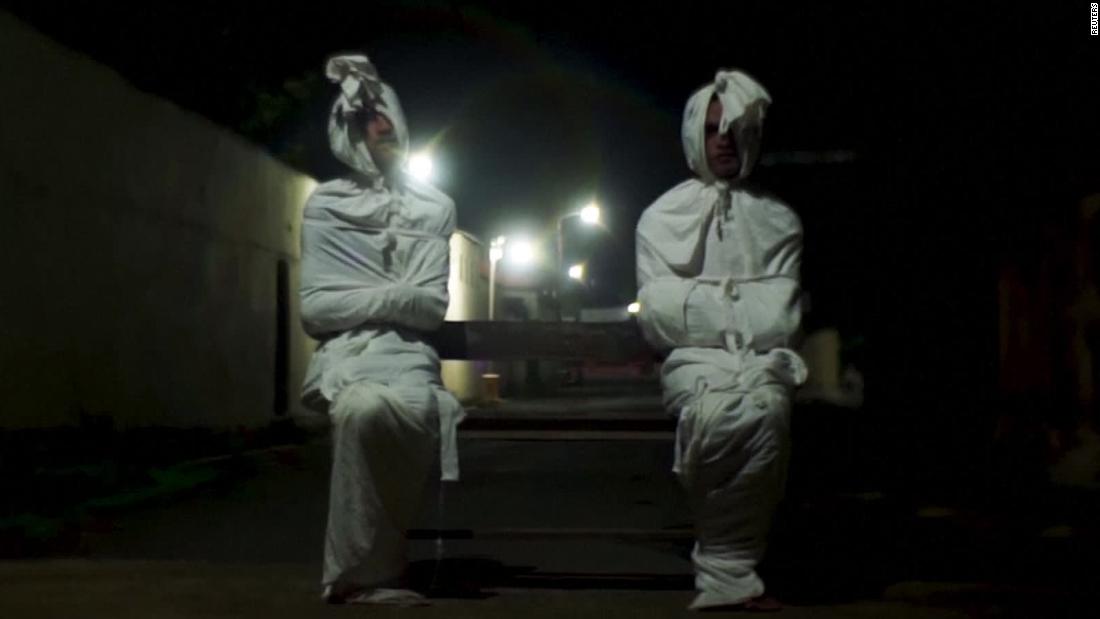 Facebook
Twitter
Google+
Pinterest
WhatsApp
The “pocong” or “pochong,” is a ghost known in local folklore for haunting graveyards, which wears the remnants of a burial shroud, tied in a knot at the head and feet.
Volunteers in Kepuh village in Sukoharjo told Reuters they have been holding “surprise patrols” every few days since early April — although the plan initially backfired when they became a social media sensation and there was an increase in people venturing out of their homes to see the ghosts.
“First of all, we want to be different. Secondly, to create a deterrent effect because ‘pocong’ is spooky and scary,” said the head of the youth volunteer group, Anjar Pancaningtyas, adding that the initiative was in cooperation with local police.
“Since we set up the pocong roadblock, the environment of the village has become more conducive [to the idea of staying inside],” he added.
The ghosts are not particularly agile and have to bunny-hop because their hands and feet are bound in the shrouds.
Indonesian President Joko Widodo declared the coronavirus pandemic a national disaster in a letter on Monday, according to the state-run Antara News Agency. The letter said that a Covid-19 task force would work on mitigating the impact of the coronavirus through coordinated effort with ministries, government agencies, and regional administrations.
He declared a national public emergency on March 31, with the country’s Ministry of Health working with regional leaders to implement social distancing measures, foreign nationals banned from entering or transiting through the country, and Indonesian citizens who had recently traveled abroad asked to self-isolate for 14 days, Antara reported.
But Widodo has stopped short of implementing a full national lockdown.
Indonesia has now recorded 399 coronavirus deaths, according to figures from Johns Hopkins University — the highest toll for any East Asian country except for China. It has reported a total of 4,557 cases.
“Local residents still lack of awareness on how to curb the spread of Covid-19 disease,” Kepuh village head Priyadi, who goes by one name like many Indonesians, told Reuters. “They want to live like normal so it is very difficult for them to follow the stay home instruction.”
And the risks may be growing as Ramadan approaches. Researchers at the University of Indonesia have predicted there could be 140,000 deaths and 1.5 million cases by May without tougher curbs on movement and gathering, according to Reuters.

Did a Scare in Jefferson Texas Inspire the Movie ‘Poltergeist’? – knue.com

Bonehilda Is Back, Baby – Kotaku Australia