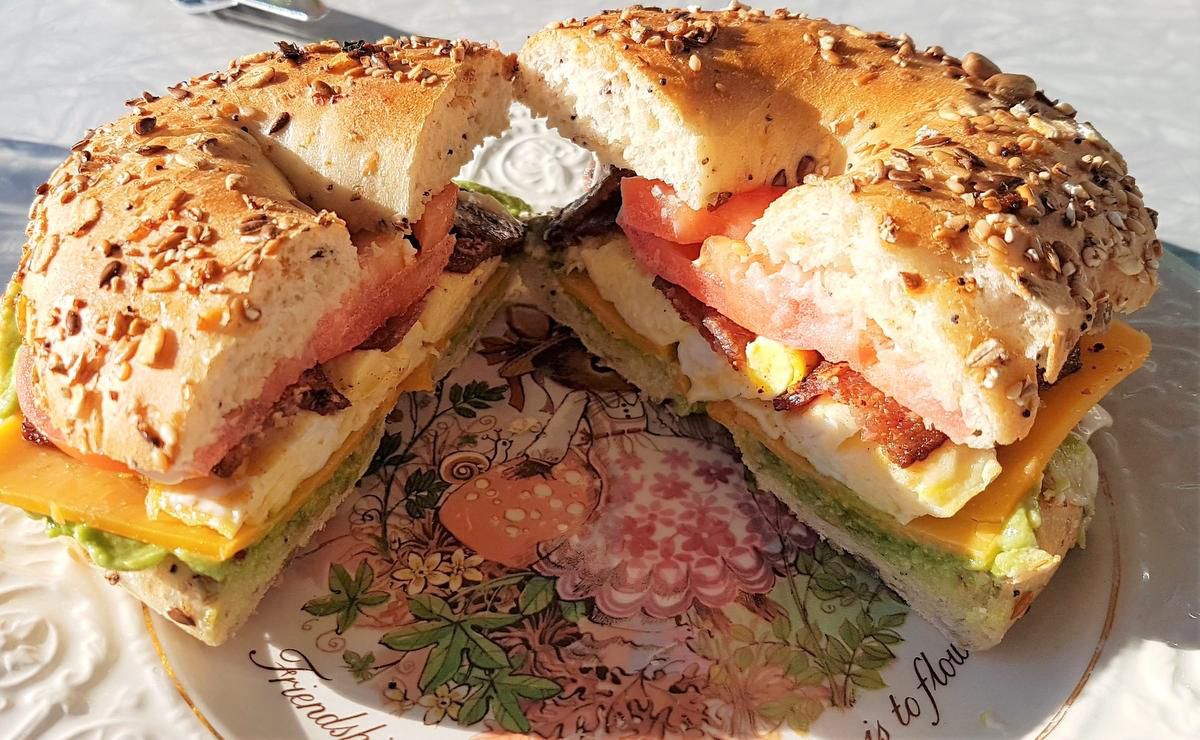 I was captivated from the get-go by the Yeti Café’s charmingly abominable website: it is replete with flashing hearts, purpley-pink ponies and a liberal sprinkling of comic sans font. I’d not eaten there, and my daughter decided that spell of amazing early November weather was an opportune time to rectify the omission.

The website’s promise of fine coffee and ‘good goo’ had persuaded me that a deviation from my normally rigorous early breakfast schedule was acceptable. As the Oktoberfest Glockenspiel sounded 9 a.m., we began our cryptozoological quest to the heart of deepest Kitchener, traversing downtown to the Yeti’s Eby Street lair, opposite the Kitchener Market.

While I struggled to find my glasses — eventually located atop my head, entangled in my mask and hat — my companion knew the drill, quickly ordering a bottomless mug of coffee ($3) for herself and a decaf Americano ($3.75) for me. Given the pace she had set in getting there, I decided a Mason jar of tart blackberry lemonade ($6.50) would help me rehydrate.

The menu is as eclectic as the website. There’s a ‘Bob’ — breakfast on a bun — and, where there’s a Bob, every Canuck knows one needs a ‘Doug’ — featuring peameal bacon, Havarti, dill pickles, and maple mustard on a kaiser. The Yeti’s owner, Victoria Kent, says the ‘Terry Pender,’ a grilled sandwich comprising aged cheddar, sliced apple, bacon and maple syrup on seven-grain, has a backstory. It’s named for a Waterloo Region Record reporter who wrote about them just after they opened in 2012, a story that proved a turning point for the restaurant. Pender notes he gets asked about that sandwich about once a week and says, “it’s delicious.”

I ordered their signature ‘Pregnant Cowgirl’ ($9.50), named by one of the Yeti’s first staffers and now accounting for nearly half the café’s sales. Avocado, cheddar, bacon and tomato, with a garlic aioli, came loaded with a fried egg, all the ingredients stuffed into an organic bagel. Looks are deceptive: Initially, I thought it looked small but was mistaken as the sandwich was both satisfying and entirely sufficient.

The sweet child who had requested the weekly omelette, showed a glimpse of her inner ravening beast as she demolished one made with butternut squash, heirloom tomatoes, swiss chard and goat feta, with a split-side of hash browns and salad. ($13.50). Afforded a sliver of a taste, I was surprised such disparate ingredients blended as well as they did. I found the accompanying chili cumin hash browns somewhat unevenly cooked, and perhaps not as hot as they might have been, but No. 1 declared them “totally fine.”

We sat and ate outside at one of the five or so battered Formica tables. Downtown bustled by, patrons came and went, trucks unloaded at the adjacent market, and a loud street sweeper resolutely redistributed the leaves on the sidewalk. We further perused the menu noting the dedication to a long list of local suppliers.

You can really taste the difference when good local ingredients are used: for instance, Yeti’s sourdough is from the excellent Golden Hearth Bakery just around the corner, and the rest of their bread come from Grainharvest, the supplier of choice for several sandwich spots in town it seems. There was also a shoutout to Cultura Café, Yeti’s supplier of coffee, including the direct-trade Nicaraguan beans they serve most frequently.

Senior Yeti staffer, Torin Langen, was busy making beverages and taking and serving orders while juggling T-shirt, water and other deliveries. Part of the arts community, he has been with the Yeti for more than five years and sees the space as inspiring and serving as a community meeting ground for an eclectic and loyal clientele. Even monster hunters in search of crypto-gastronomic treats.

If you want some of that good goo, in a setting with a nice, unrushed vibe, that feels very much part of the fabric of the city, go in search of the Yeti.

Dining columns focus on the food available for pickup, takeout and delivery in Waterloo Region, as well as meals taken on patios and in restaurants. They are based on unannounced orders from or visits to the establishments. Restaurants do not pay for any portion of the reviewer’s meal. Alex Bielak can be reached via Facebook.com/Food4ThoughtArchives or Twitter (@alexbielak)

Payment: Credit card, debit and cash. A Square terminal is used so if you need a receipt be sure to ask for it.

How to get your food: Dine in, take out and online or phone orders. Apart from the patio, there are several tables available for inside dining, in a relatively closed-in space.

The Bill: $39.03 for two breakfast dishes, two coffees and a lemonade.

Accessibility: Being in an old house, there are several steps to the front door and restroom facilities are not accessible.

Ordering food in the time of coronavirus: As restaurants are making decisions on a day-to-day basis, please check their social media or call them for updates. Lists of restaurants operating while dining rooms are closed can be found at https://bit.ly/3d2JV74 and wilmotstrongertogether.ca; a crowdsourced list is on Facebook’s Food In The Waterloo Region at bit.ly/3d1cKAX.