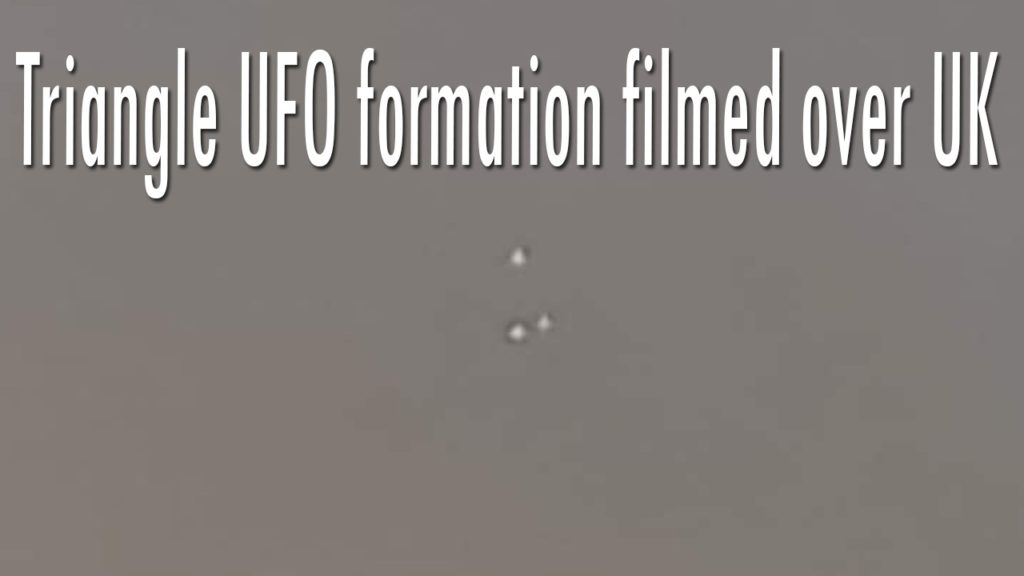 Filmed in the sky above Portsmouth, United Kingdom on 16th October 2020 at 5:40 pm. What do you think about this footage?

Witness report: 3 bright orb like objects that initially appeared connected as one object but then started moving on their own seemingly independent of one another.

At approximately 17:40 (give or take a couple of minutes) myself and my girlfriend went onto my balcony to have a cigarette. I exited onto the balcony first and turned around to face the door from which my girlfriend was following me. Upon turning around, I immediately noticed 3 bright lights in the sky in a triangle shape up to my left. This was at about a 45-degree angle but was immediately visible from my peripheral vision without having to change my line of sight. My gut reaction was that this was not manmade, it looked like a traditional UFO for all intents and purposes. Before my girlfriend had even exited the door, I shouted at her to grab her phone and my binoculars as there was something strange in the sky. She did as requested and then joined me on the balcony.

The whole sighting lasted approximately 3 minutes from start to finish. For the first 45 seconds or so the lights all appeared to be the same size and shape, something resembling a circle or oval, spaced out in the shape of a traditional isosceles triangle. After about 45 seconds, however, the 3 lights visible started moving independently of one another. It appeared as though they remained connected in some way, as though attached by string, but the 3 lights looked as though they were rotating on their own axes. Once they did start to rotate it appeared as though one or more of these lights was not in fact circular/oval, but more rectangular/cigar shaped, particularly the front light of the triangle as it appeared to me.

For the first 45 seconds or so, before the objects started moving independently of one another it appeared as though the object was either stationary in the sky or moving very slowly towards my position. I would add that this object was directly to the north of my position (likely within a few degrees of true North). Due to the weather and the position I was standing in it was difficult to gauge exactly how high or how far away the object was. However, I would estimate that upon first sighting it was about the same height as a helicopter would fly in the sky. Again, due to its position in the sky I had no reference as to the size of the object(s) so it would be very difficult to estimate its size.

Over the course of the 3 minutes, it moved from my North to almost directly above my head (North to South) at a steady speed whilst the 3 lights were independently rotating and moving around in the sky but remaining close to one another. It was very much light when this sighting occurred, probably about an hour or so before the sun would set. The weather was grey/overcast, and the sky was filled with what I would describe as heavy looking rain clouds (Mammatus clouds). This did however help to make anything in the sky stand out quite prominently.

The object(s) in its original triangular form upon first sight was located below the lowest clouds. Over the course of the 3 minutes or so, as it was gradually moving from my north overhead, it also gradually increased in altitude so that it moved above the cloud cover. I continued to watch it for as long as I could between the clouds before it was no longer visible. Unfortunately, it did not shoot off at the speed of light but gradually disappeared from view. At no point did the object(s) emit any sound.

My girlfriend did attempt to record the object in the sky but was unable to capture anything. I also attempted to use the binoculars to get a better look, but these did not show me anything I couldn’t see with my own eyes. When viewed through the binoculars I could still not make out any solid shape, just 3 bright objects that were somewhere between bright white and a touch of yellow. Likewise, I could not see any solid object that connected these 3 independently rotating lights.

The balcony from which I witnessed this is in Portsmouth, a city of approximately 180,000 people and one of the main ports of the British royal navy. More specifically in Old Portsmouth, directly by the sea (I could throw a cricket ball into the camber from the balcony) and about 2km from the Naval base. I am 30 years old and have lived here for the majority of my life and am very familiar with the various planes and helicopters that fly overhead on a regular basis that are associated with the navy as well as the RLNI. I have also completed a Masters’ degree in US Foreign Policy and Counter Terrorism and became familiar with current drone technology, which I do not believe that this was.

Upon coming back inside myself and my girlfriend tried to work out what we had just seen (ranging from unusual weather phenomenon to shared delusion/hallucination). As previously stated, both of our gut instincts were that this did not originate from this planet, however we were determined to go through every possibility as seeing a UFO isn’t an everyday occurrence (neither of us have ever seen what we would describe to be a UFO before)! After hours of discussion the only logical explanation that she could come up with was that this was 3 drones – I can almost certainly rule this out. The only explanation I could muster was that this was 3 shiny weather balloons somehow tied together reflecting the light of the sun from the other side of the sky, not that myself or anyone else I know has ever seen weather balloons above Portsea Island, nor could I find any indication on the internet that any had been released. We both were, and remain convinced that these objects emitted light through their own sources – the sky was grey, and they were incredibly bright.

If this/these were either drones or weather balloons, I am pretty sure that the navy would have sent up an aircraft to investigate an unauthorised intrusion in what it would consider to be its airspace (for national security purposes). The fact that I have no recollection of any naval aircraft in the sky either before or after the sighting is also interesting. Assuming it wasn’t military related the only logical explanation that I can come up with as to why nothing was sent to investigate it is because it wasn’t seen, via radar or otherwise.

Attached with this is one photo and one video of the object(s). As mentioned, my girlfriend failed to capture any of this on her phone, whilst I was transfixed and more interested in observing it than caring about whether or not anyone would believe me when I told them about it afterwards. The following day, however, my girlfriend mentioned what we had seen to her housemate. I am told that he excitedly ran upstairs to grab his phone and came back down with a big grin on his face, exulting that he too had seen this mysterious thing in the sky. He had been out the previous afternoon/evening with a friend and had witnessed what we had seen, but his friend did manage to record it on his phone (as well as anything can be recorded on a phone!) I promptly requested that the photo and video be forwarded onto me. That being said I can confirm that what appears in the visual documentation is the same thing that me and my girlfriend witnessed, which allowed us to rule out the shared hallucinatory experience! The fact that a friend of a friend saw the same thing suggests to me that other people must have seen it too, although after excessive googling I am yet to find any other reports.

The above account took place two months ago, but I still remember it vividly. A lot of what is included is taken from a document I wrote straight after the event, to ensure that my recollection remained as accurate as possible. In the two months that have passed I still have no explanation as to what it was other than to surmise that it must have come from another planet/galaxy/parallel universe etc. I remain vigilant but am yet to see anything else.

N.B. You will notice that throughout my description I have referred to this phenomenon as being both singular and plural as I do not know whether this was one object or three. 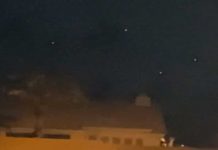 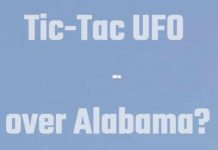 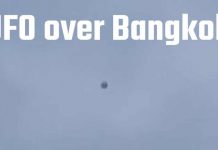