Just before midnight Saturday, the apparition of a tall man in a brown overcoat briefly materialized among the house-right seats in Row F at the Avo Playhouse in Vista — at least, that’s what paranormal researcher Nicole Strickland says she saw during a late-night ghost-hunting expedition at the 65-year-old city-owned downtown theater.

For many years, city staff have reported spooky experiences in the Avo — from floating apparitions to mysterious footsteps to unexplained cold drafts — so they opened the doors this weekend to the San Diego Paranormal Research Society.

The 5-year-old all-volunteer group — which offers its services for free to applicants — has conducted research projects on the Star of India tall ship, the William Heath Davis house in the Gaslamp Quarter and in Vista’s Rancho Buena Vista Adobe (where Strickland said she heard the voices of several 1800s-era owners, including Cave Couts).

Saturday’s 4 1/2-hour probe turned up no proof of ghosts.

But Strickland’s team said they detected a high number of disembodied voices or EVP — that’s paranormal-speak for “electronic voice phenomena” — gathered by their tools of the trade, including audio recorders, video cameras, a “spirit box” (which rapidly scans AM/FM radio signals for talking spirits) and the Ovilus X, a synthesizer that supposedly converts spiritual energy into recognizable words.

On Saturday evening, a stream of words trickled out of the Ovilus X positioned at center stage in the pitch-black theater. “PERFUME … ACCIDENT … LARRY … SIXTEEN … JULIA ….”

It was during a break after 11:30 p.m. when Strickland stood up to stretch that she says saw the apparition for just a second or two. Although nobody else saw the figure, city employee Fred Tracey said many city workers have spotted a ghostly man who looks like a farmer in the upstairs spotlight deck above the house right seating area. Tracey said that, in October, he saw a male figure gliding along the balcony rail that he thought resembled the theater’s onetime manager Earl Willis.

Built on the site of an old avocado grove, the Avo Theatre opened in 1948 as a cinema. It thrived under Willis’ care until the 1980s when multiplexes killed off single-screen movie houses. The Avo was closed from 1989 to 1994, when the city bought it and converted it into a playhouse to be used by the city-sponsored Moonlight Stage Productions and other community groups. Although there is no record of a death in or around the Avo, ghostly occurrences have been reported there since the 1990s.

Moonlight’s founder and former artistic director Kathy Brombacher said she had many uneasy moments in the creaky upstairs hallway and office.

“I’ve always felt that the upstairs hallway had some strange breezes blowing by me which gave me odd feelings being alone,” she said. “Sometimes in that office I would hear the floor creaking and think someone was coming down the hallway (and) no one would appear.”

Moonlight’s managing director Daniel Kays said that janitors have refused to work the night shift at the Avo after hearing unexplained footsteps, and cleaning ladies have reported hearing a man laughing upstairs late at night.

Electrician Ashley Jenks said she experiences cold sensations in the upstairs hall around the light and equipment rooms that have given her “the heebie-jeebies.”

“Whenever I get the weird, eerie feelings, I just sing to the ghosts and they, or he, leaves me alone,” she said.

And when professional photographer Becky Gemmell shot promotional photos of the Avo in the early 2000s, all of her photos of the theater’s interior had strange white sunspot-like “orbs” on them.

Actor and director David Beaver said he has often felt “watched” while working in the Avo.

“From the stage I’ll sometimes think that I see movement in the upstairs booth area. The upstairs hallway has an uneasy feeling to it and a cold spot just upstairs and to the right of the first doorway,” Beaver said. “ I generally feel like someone is behind me at all times in that hallway and quite often the hair on the back of my neck will stand up when I’m up there.”

Two years ago, Beaver said he was working backstage building the cabin set for the play “Foxfire” when he thought he heard his supervisor step on to the cabin’s porch. When Beaver went out to speak with him, he found the stage empty and very cold.

“It took a moment to realize that I was still alone in the building and (I) very quickly became uneasy,” Beaver said. “I left the stage and went to the lobby until he returned.”

Strickland’s team uses both technical (cameras, equipment) and their own intuitive or psychic techniques to conduct research. San Diego-based Strickland said she has had ghostly encounters since she was 5 years old. Her colleague Delia Rugamas of University Heights said she can’t remember a time in her life she wasn’t in touch with the other side. And new team member Donna Malmborg of El Cajon grew up in Massachusetts, where she said the spirits exist openly side by side with the living. Malmborg’s partner Charles Jellison has also joined the team as the society’s technical director.

Horror movies and reality TV shows like “Ghost Hunters” have warped the public’s perception of paranormal research, Strickland said. It’s rare to encounter a malevolent spirit, hard to record an apparition or clear speech, and spirit connections happen only about 20 percent of the time. Often, the negative energy people feel in their homes is the product of their own mental illness or the toxic discharge of an unhappy marriage, so she approaches each job first as a social worker (she holds a master’s degree in counseling).

“What we do is not a circus act,” she said. “A lot of captured evidence can be explained away or debunked. We’re not out to debunk or to prove the existence of ghosts. We want to find out why the spirits are here.”

For each project — there’s a two-month backlog of requests — the team conducts historical and geographic research on the site. Rugamas said moon phases, thunderstorms, solar flares and geomagnetic anomalies are also taken into account. To coax out ghosts, “trigger” objects are positioned around the home or business. For Saturday’s observation, the team arrived with an avocado (to attract the farmer), and both a picture of a cat and bottle of beer to reach the late Sandra Ellis-Troy of Vista, a beloved Moonlight actress who died in 2010 at age 68.

“A theater is filled with good emotional energy and positive memories,” Rugamas said. “The spirits are happy here.” 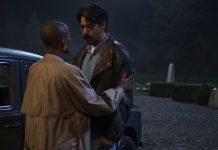 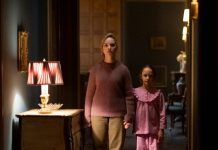