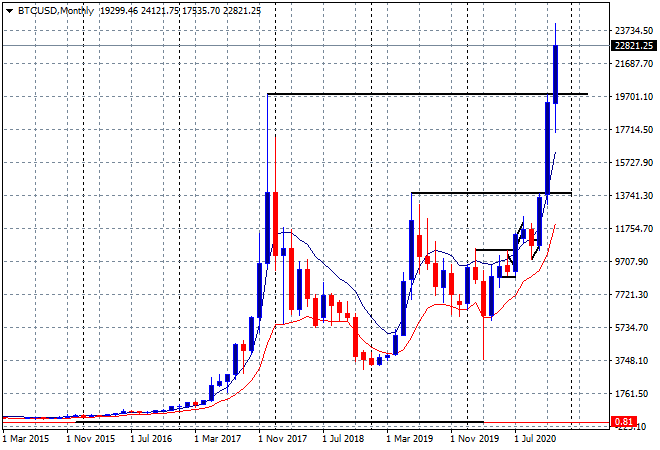 The number of memes around financial assets – and their cryptozoological Frankenstein cousins – continues to mount as the world’s central bankers unleash as many acronymic “easing” programs they can to arrest the COVID economic depression. HODL was the classic one for Bitcoin, as it crushed under the weight of its first bubble in late 2017, with BRRRR the de jour version for 2020 money printing. There has been a combination in recent weeks as the cryptocurrency the central bankers love to hate has skyrocketed past its 2017 highs:

And a squeeze. The cult like HODLers are having a field day in schadenfreude as every man and his taxi driver piles in to Bitcoin. But at what cost to the other cryptos and possibly to the wafer thin confidence in its supply – the actual reason to consider it a more sound alternative to non-limit bound virtual paper currencies – is the question asked here:

….is bitcoin’s recent gain in market share due to the inevitable death of all those no-name/no-future coins that came to market during the recent ICO frenzy? Or is it due to defections from the other viable cryptos that might someday challenge bitcoin’s dominance?

During a week in which bitcoin had an epic run, the other well-known cryptos did okay. The oxygen may have been sucked out of the no-names with market caps approximating zero, but ethereum, litecoin and bitcoin cash all caught a bid. These charts actually paint a picture that resembles precious metals mining. Bitcoin is a Barrick or Newmont that just had a really good year, while the lesser cryptos look like mid-tier or junior miners being swept along in the sector whale’s wake.

Which means the crypto ecosystem might be evolving into a normal market, with big and small players and a common-sense dynamic in which a big player’s success sends money flowing down the food chain in search of juicier percentage gains.

With one difference: The supply of viable gold miners is constrained by geology. There’s just so much gold out there, and most of it has already been found. But the number of cryptos with algorithmically-constrained supplies is potentially infinite. And as money flows into that space, the incentive to create more bitcoin clones – and to sell bitcoin itself to buy those potential hundred-baggers – rises.

The supply of greater idiots ready to jump into the next latest thing is not that limited, until it is when everyone wants to sell. Crypto currencies don’t need to evolve into normal markets. They are normal market devices, run by humans with human emotions, just like CDO’s, CFD’s and other invented instruments. They’re all tulips ready to pluck themselves.