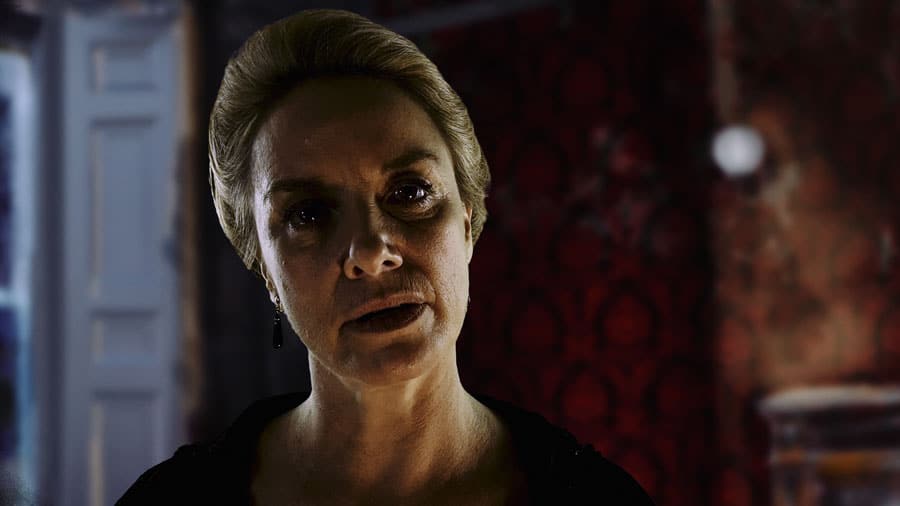 The global pandemic scuppered plans for the BBC to continue its tradition of a new short film at Christmas based on a classic ghost story by MR James, but Original Theatre Company has filled that gap. Drawing on its expertise in streaming theatre, it has created a new adaptation of one of James’ tales, The Experiment, and turned it into a new spine-chilling piece, The Haunting of Alice Bowles, with an eight-strong cast.

At its heart, the film sticks to James’ horrifying account, revealing how a woman, Alice Bowles, and her son try to summon up the spirit of her dead husband, Francis, to find out the whereabouts of his hidden fortune. In the original 1931 short story, an unnamed “sickness” is devastating the local community so it makes sense that the adaptation is now set in 1918 at the height of the so-called Spanish Flu. But writer Philip Franks, who has directed the film with Alastair Whatley, goes a step further and interweaves it with a new narrative set in 2020 in the age of Covid-19, about a vlogger, Matt, and his girlfriend, Cait, investigating the supernatural in the graveyard where Francis Bowles is buried. Self-consciously alluding to modern horror classics such as The Blair Witch Project and Paranormal Activity, it effectively uses modern media technology to create some extra thrills.

In fact, video technology enhances the whole production. For the 1918 scenes, actors performed their parts at home in isolation in front of green screens, with theatrical painterly backgrounds added afterwards along with atmospheric lighting and shifting shadows. Designed by Adrian Linford, it creates an almost dreamlike aesthetic that heightens the eeriness of the story, complemented by Max Pappenheim’s sound and music. Tamzin Outhwaite is excellent as the troubled Alice Bowles alongside Jack Archer as her equally haunted son, while Stephen Boxer is perfect as the bewildered local vicar – an essential MR James character. In the present day, Max Bowden treads a fine line between neediness and toxicity as the increasingly desperate vlogger, with Alexandra Guelff providing good support as his understandably perplexed girlfriend.

Franks’ adaptation is dark and, at times, sordid in its revelations about Francis Bowles’ depravity which feels no spiritual match to Boxer’s kindly vicar. Based on one of James’ shorter stories, it has been developed into a gripping, suspenseful 45 minutes which, with room lights and mobile phones switched off, also delivers a few scares. Is it a film or is it theatre (or does it matter)? It works well on the screen, edited by experienced film director Tristan Shepherd, but its production design has a theatricality in its departure from TV naturalism. In the words of MR James, it exists in some kind of “middle state”, with equally unsettling results.