Part of a continuing weekly series on local history by local historian David Reamer. Have a question about Anchorage history or an idea for a future article? Go to the form at the bottom of this story.

Behind every Anchorage street name is a story. Of course, some of these stories are longer than others, with drama, crime and standout characters. Spenard Road is one such example. Thankfully, most streets lack an infamous backstory. The following are some of the shorter but still important local street name origins.

A drive through most Anchorage neighborhoods reveals patterns in the street names. In general, residential streets are often named by some combination of developers and residents. Developers, and city planning departments that approve names, tend to be partial to themes. Collectively named streets are one helpful step toward the construction of a community identity. Where the neighborhood identity goes from there is another story (i.e., dead presidents in Spenard).

In 1940, Norman Lange began subdividing his homestead in what is now Mountain View. As a perk, he allowed buyers to name streets. To this day, most of the neighborhood roads are named after either area homesteaders or early residents. Klevin Street, though misspelled, is named after homesteader Nels Kleven. Harry Hoyt of Hoyt Street owned one of the first Anchorage car dealerships. Lane Street is named for hotelier Harry Lane. Harry Bliss of Bliss Street was a contractor.

Other street name origins are far less straightforward. Construction on Debarr Road began in 1950 and finished by 1951 at the latest. It originally ran from Muldoon Road west to Airport Heights Boulevard, notably not connecting through to 15th Avenue. As the story goes, in the 1940s, there was a homesteader in East Anchorage, or at least what is now called East Anchorage. He was frustrated by arbitrary Army restrictions that prevented him from accessing Oilwell Road. And he supposedly remarked, “first they bar us, then they de-barr us.”

The earliest known version of this story is from a 1981 Anchorage Historic Landmark Preservation Commission booklet published 30 years after the fact. It neither names the homesteader nor identifies any other source for the anecdote. For these reasons, this origin should be considered more legend than history until better documentation is discovered.

Also, is it De Barr, DeBarr, or Debarr? Street signs are inconsistent as they are elsewhere in town, as with DeArmoun Road. All three versions were used in the early 1950s, but DeBarr was by far the most common version.

Debarr is not the only Anchorage road with questionable spelling. Illiamna Avenue runs through the West Anchorage neighborhood of Turnagain. The developers could have had the volcano, monster or lake in mind, but the name derives from the Dena’ina term for Iliamna Lake, Nila Vena, which translates as Islands Lake. The avenue name was initially misspelled with two L’s. In 1963, city planners corrected the name to Iliamna and installed a new sign, part of an extensive overhaul of city street names. However, the older, misspelled version later reappeared.

Coincidentally, Turnagain was developed as a residential neighborhood around the same time the Iliamna Lake Monster legend bubbled out into both broader Alaska and national consciousness. The 1950s were also when the pseudoscientific word cryptozoology entered the lexicon. In 1952, Anchorage bar owner Jimmy Sumpter made a trip to the lake intent on catching the “mystery fish” said to “run as large as 12 to 18 feet.” Two years later, the Anchorage Daily Times ran an article on the legendary cryptid with a witness account of a fish “at least six feet long.” More recent descriptions claim the beast is as long as 30 feet. Unsurprisingly, as the story spread, the monster got bigger.

The passage of time can obscure name origins, especially when others with the same name become more prominent. Today, the most famous Eide in Alaska lore is Harald Eide, best known for his “Alaska Adventures of a Norwegian Cheechako” memoir. However, Eide Street in Midtown Anchorage is not named for him, even though the parallel Cheechako Street is only three streets away. Eide’s book was not published in English until 1975, and Eide Street was built in the early 1950s.

Eide Street is actually named for Arthur Eide (1886-1972), a Presbyterian missionary, teacher and homesteader who lived in Anchorage from roughly 1922 to 1955. For a time in the 1940s, he hosted a KFQD radio show, primarily stories of old-time Alaska.

When Anchorage residents have named roads, it usually works out fine since they typically name roads after themselves. For example, when Howard McRae built a road to his homestead off Spenard Road, he called it McRae Road. Some Alaskans, however, get a little carried away by the creative power. That is how we ended up Outta Place in Anchorage, Owhat Circle in Eagle River and Helluva Street in Chugiak.

Off Huffman Road, near Old Seward Highway, is a short road called Silver Fox Lane. Old-timers might remember when it was officially named Jackass Lane. Betty McKean (1926-2003) lived on and named Jackass Road. And yes, she had the boisterous, cantankerous attitude to match. She was renowned for loving animals and even established a pet cemetery. She told the Anchorage Times in 1990, “I could never shoot an animal, but some of their owners, now that’s a different matter.”

City officials renamed Jackass Lane in 1986 over her vociferous objection. She arrived at one hearing with a letter from a local psychiatrist that declared, “Anybody who has trouble with the word ‘jackass’ is definitely in need of psychiatric help.”

Even though it is not in Anchorage, no article on street names in Alaska is complete without mentioning Poopdeck Street in Homer. The street, with its frequently stolen sign, is not a joke or nautical reference. It is named after longtime resident Clarence “Poopdeck” Platt (1904-2000). He enlisted in World War II at 39, visited every continent, took 25 pills a day, avoided doctors, made his own wine and lived to 96. His nickname was a reference to the Popeye cartoon, specifically Popeye’s father, Poopdeck Pappy. 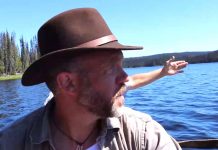