• This NPR story is the totebag-and-golf-umbrella exemplification of the perverse “unity” that some prefer to truth, liberty, or justice, “Journalist ‘Survived’ Post-Election With Conspiracy Theorist Boyfriend.”

There’s so much going on there that is ugly or willfully naive. Let’s start with the “conspiracy theorist boyfriend.” It’s not that he likes Oliver Stone’s JFK or listens to Coast to Coast Live or that he’s into cryptozoology. This man claims to be a Q-Anon true believer. This is a life-consuming, life-transforming conspiracy theory. Adherents of this toxic nonsense are not “theorists,” they’re disciples. He claims to believe, in other words, that a secret cabal of global elitists secretly runs every government, cultural, religious, and media institution and that this evil cabal also ritually abuses, murders, and eats small children.

Q-Anon is a thoroughly antisemitic religion, a rehashing of the worst of the antisemitic Greatest Hits of the Inquisition and the Third Reich. It teaches and preaches that “The Media” in the abstract is a tool of evil and that every individual journalist is either an unwitting puppet or a willing servant of the evil globalist cabal of Satan-worshipping pedophile cannibals. So this is what this “boyfriend” claims to believe about his journalist “girlfriend.”

Yet NPR presents this as just some quirky disagreement over conventional politics — some “You say to-may-to, I say to-mah-to” difference of perspective that can be shrugged off as insubstantial and smoothed over because Can’t We All Just Get Along? That vapid tone is established from the outset as Michelle Martin introduces the piece with a credal affirmation of both-sides equivalence: “Americans are, in fact, living in different realities,” she says.

No. We all live in one and the same reality. That’s what reality means. Some Americans may choose or claim not to accept reality, but that doesn’t mean they don’t live in the same reality as everybody else. As Philip K. Dick put it, “Reality is that which, when you stop believing in it, doesn’t go away.”

It’s dangerous to treat Q-Anonsense as just another conventional political disagreement, akin to a dispute over marginal tax rates or some argument over regulatory laws vs. market-based incentives. It’s a hateful fantasy that consumes the lives and happiness of its adherents and that applauds and incites violence toward those it teaches them to view with contempt.

Liesl von Trapp understood this better than NPR or this sad journalist. She didn’t try to make things work despite her differences with her boyfriend Rolfe. Once he went Nazi, she dumped his ass. She may have been only 16, going on 17, but she had more good sense about this than NPR seems to have.

• Spring is starting to arrive at the Big Box, including whole pallets of these. They come in boxes labeled “Green plastic watering cans,” thereby getting Radiohead’s “Fake Plastic Trees” stuck in my head every time I restock them. Every. Time. 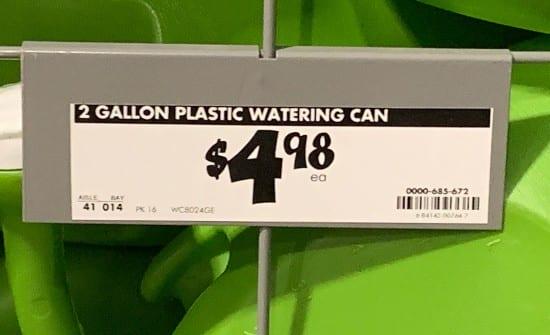 Anyway, we’ve only got a few weeks before we go into all-out spring-a-palooza mode. Right now, we’re still at the stage where the store talks about hiring a new supervisor to work the weekend overnights that start mid-February and run through the end of summer. Traditionally, this talk of hiring someone will continue up until about the week before those weekend overnights start, at which point someone (ahem) will either volunteer or be voluntold that they’re going back on the nightshift. Given that the pandemic isn’t going anywhere before summer, the prospect of working in an almost empty building is kind of appealing, so this time around I may spare them the voluntelling. The hours may suck, but it’s a lot less contagious. Plus there’s no customers around to look at me funny if I suddenly start singing old Radiohead songs.

• Taxation without representation is tyranny, the Founding Fathers said. It’s also the status quo in the District of Columbia, which has more residents than the state of Wyoming, but without any voting member of Congress. Wyoming gets two votes in the United States Senate while the American citizens of DC get none.

DC has its own professional baseball, football, basketball, and hockey teams, but not the right to oversee its own state budget. That’s just indefensibly wrong.

And don’t get me started on Puerto Rico, which we call a “territory” because that euphemism sounds less hypocritical than just admitting that it’s a colony that we treat as a colony.

Statehood for DC and for Puerto Rico (if that’s what the people of Puerto Rico want) is, first off, a matter of simple justice. The fact that it would also ameliorate the unjust and undemocratic misrepresentation of the Senate is a secondary, but also vitally important factor.

So, OK, adding four more desks to the Senate chambers wouldn’t be complicated, but what about the flag? The 50-star version of Old Glory has been around for the last 60 years, but what would a 51- or 52-star flag look like?

Don’t worry — that’s already been figured out. The U.S. has an official Institute of Heraldry and — according the Smithsonian — they’re ready and waiting with designs for flags with anywhere from 51 to 56 stars. The new flags would become official on the first Fourth of July following statehood for any new states.

• Here’s a lovely rendition of the one from the title of this post: