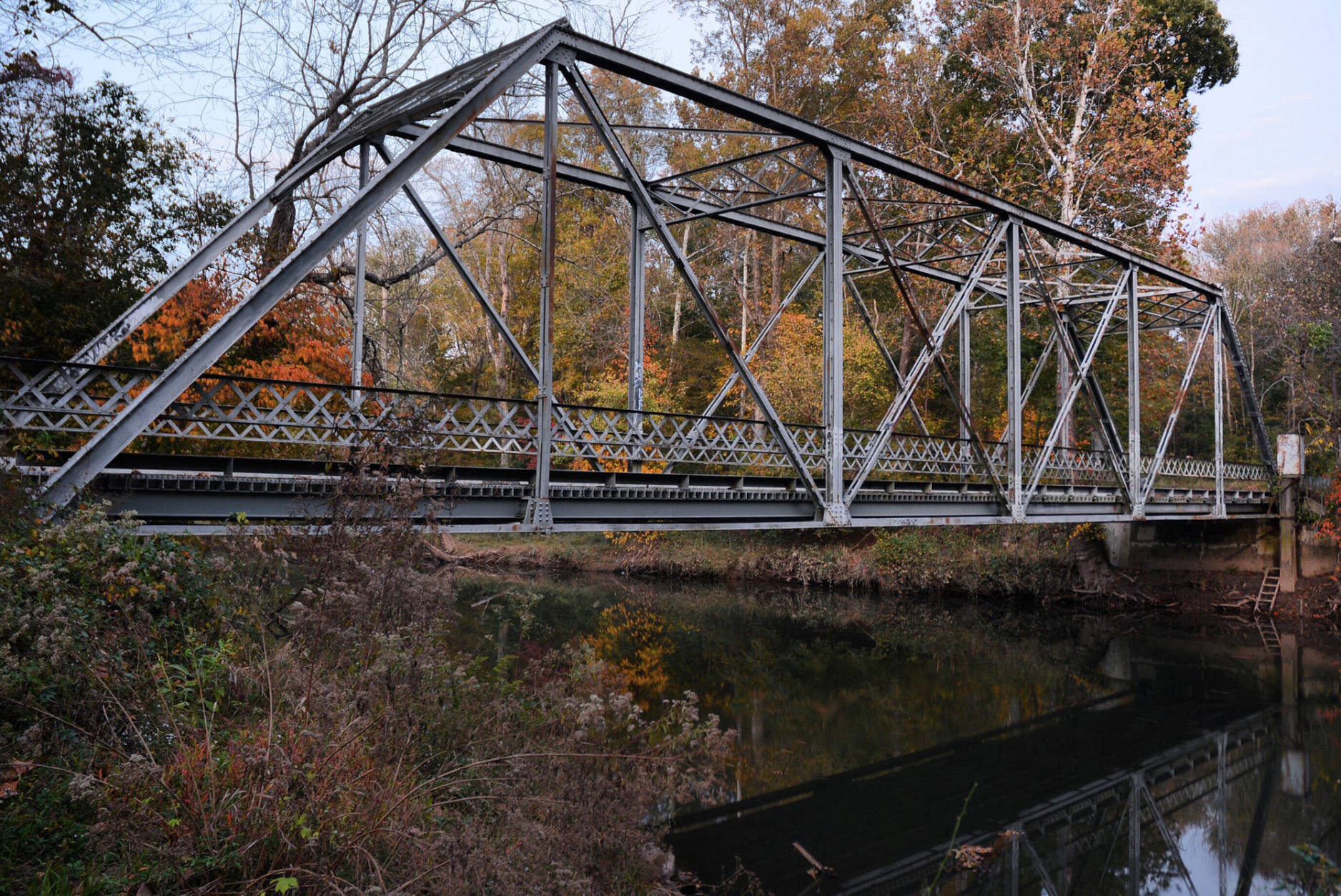 For decades, even centuries, the ghost bridges of Maryland and Virginia were spectators to history, war and death. Unearth some of their forgotten secrets and ramble under their haunted spans with WTOP’s Dave Dildine as your guide.

WASHINGTON — Hidden in the outer reaches of the Washington region lie rotting, rusting bridges lost to time and encroaching woods.

These landmarks stand silently in the overgrowth having survived decades of flooding, graffiti and neglect. There is a stillness unique to these places, once bustling but now mostly forgotten.

In years past, WTOP has explored abandoned roads in D.C. This October, we ventured to the outskirts of the metro area in search of cursed and crumbling ghost bridges in Maryland and Virginia.

There is no regular travel across these rickety structures. Woodland growth sprouts from their abutments. Gnarly vines cling to their withering trusses. The ghost roads leading toward many were long ago consumed by an untamed wayside.

A few of these sites have played host to sinister acts; others have been witnesses to death and war. Some are even said to be haunted.

An urban legend suggests that a child was murdered in the murky waters of the Patuxent River below Governor’s Bridge. The century-old structure — sometimes referred to as Crybaby Bridge — sits in a lonely hollow on the fringes of Bowie, Maryland.

“Something about the bridge at night — I would never drive it because I was always fearful of something jumping out at me. Crybaby Bridge at night scared the heck out of me,” said resident Ann Drenner.

Drenner, who has lived near the truss bridge for decades, said that on blustery nights, locals have heard the lonesome wail of an infant under the bridge.

“I was the last person over the bridge before they closed it. I just had an eerie feeling on the bridge that day for some reason,” she said.

Governor’s Bridge was barricaded for safety reasons in early 2015 after an inspection revealed significant steel corrosion.

Lore aside, there are disturbing truths surrounding other Maryland water crossings.

Grisly acts occurred with shocking frequency on Sharperville Road at Mattawoman Creek. Several bodies were dumped in the foggy wetlands underneath the bridge during the late 20th century, according to retired Charles County Sheriff Deputy Randy Ringley.

“One of the reasons they wanted it closed was we were finding bodies down there all the time. I can remember four or five bodies we found down there … I remember the officers on midnight shift would sometimes go down there and pull off, turn their lights off, and just sit there and wait for someone to come through,” Ringley said.

The old road was also known for being dangerous — the average number of yearly crashes was more than three times the statewide average.

“The big thing was that the traffic was just horrendous because people would use this as a cut-through.”

But by nightfall, Ringley said, the highway became ghostly quiet.

Highway engineers attributed the abnormally high number of crashes to substandard road geometry near the bridge. Others believed the road was cursed. It was closed about 10 years ago.

The Farm Road overpass above Interstate 97 was once the route along which deceased patients from the shuttered Crownsville Mental Hospital were taken to burial. The asylum operated from 1911 to 2004. During the middle of the 20th century, the hospital experienced a rash of patient deaths later attributed to filthy living conditions and insufficient staffing.

“It starts off like a regular road like this. But when you get around to the bridge, then all of a sudden it becomes mud,” said George Sandridge. Sandridge has worked as a mechanic in a cinder block garage along Farm Road for nearly 20 years.

Farm Road dead-ends at the bridge. Beyond the overpass, the old hospital’s cemetery mottles a secluded knoll.

“You got the patients back there, buried just over that hill past the bridge,” he said.

Most of the flat grave markers bear no names, only numbers. More than 1,000 patients remain unidentified. Sandridge has heard that the cemetery records were destroyed in a fire years ago. Others believe the families of those interred wanted their loved ones to anonymously rest in peace.

The Farm Road Bridge has fallen into disuse in recent years. The road and cemetery are closed to the public.

In Virginia, some ghost bridges are historic links to the past that no longer link roads of the present.

Built in 1884, the Bull Run Stone Bridge sits quietly beside present day Route 29 in the Manassas Battlefield. A vestige of the Warrenton Turnpike, the dual arch bridge played a key role in the Civil War. The original structure was destroyed by the Confederacy and rebuilt several years after the war.

The Goose Creek Bridge, hidden in dense woods outside of Upperville, Virginia, is all that remains of Ashby’s Gap Turnpike.

The Bull Run and Goose Creek crossings are both within the Mosby Heritage Area. John Singleton Mosby fought for the Confederacy in the battles at Manassas before garnering the nickname the “Gray Ghost” from President Abraham Lincoln.

This is the third year of WTOP’s “Ghost Roads” series. View past galleries via the links below.