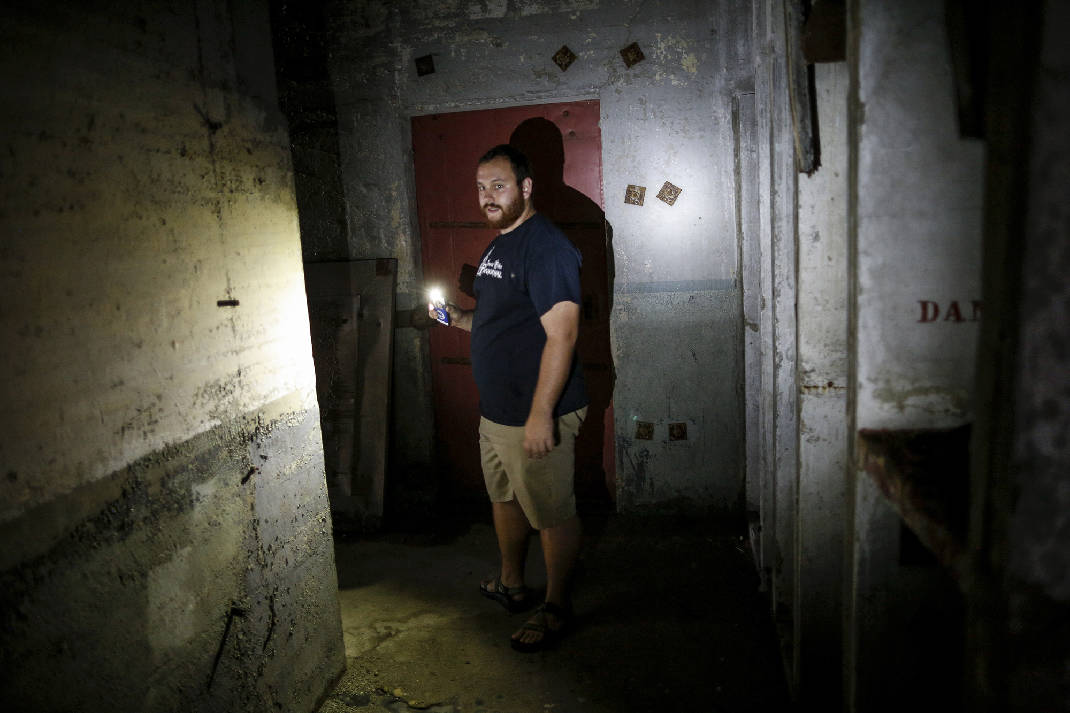 Ghost pretenders instill fear at most Halloween houses, but inside a few area buildings no pretense is needed.

Co-founder John McKinney names the buildings as the top three in a list of 10 most haunted places around Chattanooga.

“This is the real deal,” he said. “We don’t have anything set up. We just have our equipment, and we talk to ghosts.”

McKinney spoke before leading a tour this month of a building at Hales Bar Marina & Resort, the second most haunted place in the Chattanooga area.

McKinney is leading an investigation through Hales Bar on the weekend before Halloween. Participants get an hour-long presentation about how to identify ghosts. They discuss how to communicate with spirits and they learn about the equipment. Then they divide into groups and explore the grounds.

The event is called Ghost Haunting 101.

The Top 10
most haunted locations in Chattanooga

9. The director’s cabin at Girls Camp on Lookout, Menlo, Ga.

For more information or tickets to the Hales Bar Dam ghost investigation go to www.stonesriver
paranormal.com.

Spirits at Hales Bar Marina include a girl named Linda, who haunts the second and third floors of the building and a shadow figure who communicates with people only when they leave tobacco on a table. Most ghosts are harmless, but one spirit at Hales Bar is eerie, said McKinney.

He is believed to be the spirit of a foreman who usually occupies an area on the walkway above a small whirlpool in the building. McKinney suspects the foreman ghost may be stuck in time. He can be heard on some voice recordings repeating the words “check” and asking for updates.

“It doesn’t really interact,” said McKinney. “But it keeps repeating those types of words.”

The latest Hales Bar Marina investigation starts at 7 p.m. and lasts until 3 a.m. the next morning. McKinney will lead the tours today and Saturday, Oct. 28. The fee is $65. And it usually sells out, he said.

The funds from the Hales Bar investigation go back into the nonprofit, but Stones River Paranormal doesn’t charge when people want them to investigate their home or business.

Stones River Paranormal is an evidence-based and Christian-influenced team, according to the website, www.stonesriverparanormal.com. The group was formed in March 2012. It has investigated more than 100 locations in nine states.

McKinney, who is called “Little John,” started the company with his dad, called “Big John,” who is also named John McKinney. The son, now 23, had recently finished his Boy Scout program and the father-and-son team wanted more activities they could do together.

They both enjoyed watching ghost hunter shows on television and thought they would enjoy ghost hunting themselves.

The Discovery Channel liked the father/son team so much that it flew their team to Alaska in 2015, where they investigated an old brothel that was haunted, he said.

McKinney started the Hales Bar Dam tour this month by taking a small group into a building that led to a dark tunnel. It was so dark that even the glow of a flashlight faded before the light reached the tunnel’s end.

The back story, according to the Travel Channel, is that Hales Bar Marina sits on Native American land that a Cherokee Indian called Dragging Canoe didn’t want to give up during the Trail of Tears. He cursed any settlement on it.

It was 1913 when Hales Bar Dam was built to stop flooding in the town. But it leaked from day one and many people believed the dam’s failure was the Indian’s curse at work. The land underneath the water was once burial ground for many children who succumbed to a flu epidemic and died in the late 1800’s and early 1900’s. The water flooded the area when TVA flooded the entire town, according to a segment about Hales Bar Marina and Dam featured on the travel show.

The flood left several graves underwater and unexplained child voices can be heard in the tunnels, according to the channel. The segment can be seen at www.travelchannel.com/videos/hales-bar-marina-and-dam-0194562.

McKinney doesn’t go much into the Cherokee legend. But he does say that he’s detected and communicated with spirits in the tunnel with his equipment. He says that the people he’s taken on investigations have heard children’s voices in the tunnels. Some tourists are so convinced that they return to the building with toys for the children they believe they heard.

McKinney has never felt threatened by any ghost he’s encountered, but he recalls leading an investigation at the South Pittsburg hospital when someone claimed to have been scratched while participating in an investigation. When McKinney asked to see where the person had been scratched, he showed his back and “you could actually see three scratch marks, but that’s really rare,” said McKinney.

His equipment includes night vision cameras that allow him to see movement in the dark. He has a thermal camera that measures heat or picks up cold spots. And he has audio recorders.

McKinney recalled talking with a ghost.

“One thing that actually happened that was really cool, I took a deck of regular playing cards, and there’s a table on the second floor inside the main area. I balanced the cards on the edge of the table and said, ‘If someone is here, we want you to knock off the card with the number 7.’ “

And then “Only that one card moved back and forth, alright?”

“And then about 30 minutes later we left the cards there, and we left the room because we said, ‘Oh well, you’re not doing it.’ We’re going to leave for a minute. And then we came back and I said, ‘This is your last chance, we are about to leave.'”

And at that moment, the card that McKinney had been asking for fell off the table.