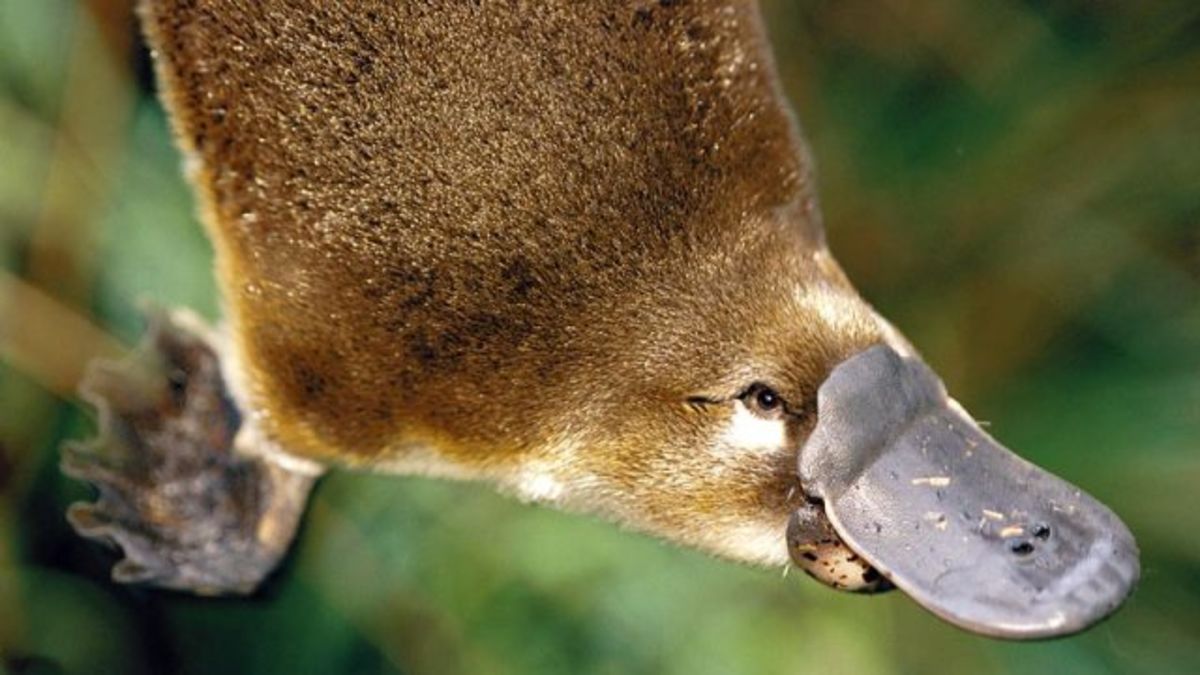 When we think of cryptozoology, we usually think of Bigfoot, the Yeti, and the Loch Ness Monster, creatures that are – let’s face it – probably legendary. But some cryptids are real: just ask the platypus, okapi, and giant squid.

Of course, all of those are former cryptids – they’ve long since been “officially” discovered. But the fact is that all these creatures were not so long ago considered the stuff of myths and hoaxes by serious zoologists, and that something like the platypus was considered just as unlikely as Sasquatch. These are all real creatures that, at least for a moment, blurred the line between zoology and cryptozoology.

You might want to argue that, while the animals on this list were certainly once cryptids, they belong in a different category from the likes of Bigfoot or the Loch Ness Monster, both of which are massively unlikely to exist and clearly the stuff of fringe theory and pseudoscience. And while I would generally agree with that assertion, I’d still have to say – have you looked at a platypus recently? Never has a real animal more completely looked like the work of a hoaxer, and not a particularly imaginative hoaxer at that.

The platypus is a venomous, egg-laying mammal with the bill of a duck, the feet of an otter, and the tail of a beaver. If you were a European naturalist in the 18th or 19th century, wouldn’t the sane reaction to receiving the corpse of such a creature from its supposed home in Australia be to say that it was a practical joke? While describing a carcass of the creature for the journal Nature’s Miscellany in 1799, the well-respected English zoologist George Shaw began and ended his description with the acknowledgment that this might just be a crazy hoax:

Of all the Mammalia yet known it seems the most extraordinary in its conformation; exhibiting the perfect resemblance of the beak of a Duck engrafted on the head of a quadruped. So accurate is the similitude that, at first view, it naturally excites the idea of some deceptive preparation by artificial means: the very epidermis, proportion, features, manner of opening, and other particulars of the beak of a shoveler, or other broad-bill species of duck, presenting themselves to the view: nor is it without the most minute and rigid examination that we can persuade ourselves of its being the real beak or snout of a quadruped…

On a subject so extraordinary as the present, a degree of skepticism is not only pardonable, but laudable; and I ought perhaps to to acknowledge that I almost doubt the testimony of my own eyes with respect to the structure of this animal’s beak; yet must confess that I can perceive no appearance of any deceptive preparation; and the edges of the rictus, the insertion, and when tried by the test of maceration in water, so as to render every part completely moveable seem perfectly natural; nor can the most accurate examination of expert anatomists discover any deception in this particular.”

G/O Media may get a commission

Shaw was, it seems, basically convinced that the platypus was real, but he also was obviously trying to cover himself in case it turned out he had been hoodwinked. According to the famous surgeon Robert Knox, Shaw’s contemporaries were less charitable, with many writing the thing off as a forgery made by Chinese sailors, who had earlier perpetrated a similar hoax with a supposed mermaid. It wouldn’t be until nearly a century after Shaw’s time that the platypus’s existence was definitively confirmed, and it endures as the ultimate proof that nothing is too ridiculous to be real.

The platypus took a long time to gain zoological acceptance because it was so unlike any other animal and because its Australian habitat was so isolated from the European scientific community, which until the early 20th century had near exclusive domain over which animals were “real” and which were “fake.” The okapi, on the other hand, was something rather different. Its central African habitat was well-known to European explorers, and it looked very much like some sort of zebra or donkey (although, as it happens, its closest relative is actually the giraffe). Surely zoologists couldn’t have missed something like that during all their expeditions?

And yet it wasn’t until 1901 that the okapi was officially described. There are a few reasons for this. Their natural habitat (which today is entirely confined to the Democratic Republic of the Congo) is in incredibly dense forest, and they are generally quiet, solitary animals. No other African animal of even remotely comparable size is quite so completely isolated from human experience, and that’s why it evaded detection for so long.

To be fair, the indigenous Africans were definitely aware of its existence before 1901, but even then it appears that their interactions with it were limited, and their knowledge of the okapi came more from hoof marks and tracks than direct contact. Sir Henry Stanley – most famous for asking, “Dr. Livingstone, I presume?” – provided the first European description of the okapi during his travels in the region in 1890, but he could offer no conclusive evidence of such a beast. It wouldn’t be until 1901 that the zoologist and imperial official Sir Harry Johnston, with a lot of help from native inhabitants, was able to get his hands on an okapi skull and a couple skins, and it was with this evidence that the creature’s existence as at last confirmed.

If you’re looking to hide a gigantic, undiscovered beast, then really you need to put it in the ocean (and no, a Scottish lake will not work as a substitute). While some jungles are dense and remote enough to hide something like the okapi, only the ocean depths could hide something of the magnitude of the giant squid. This aquatic monster, along with its even bigger cousin the colossal squid, can grow to well over forty feet long, and yet more than two thousand years elapsed between its first sighting and its confirmation as an actual species.

Reports of the giant squid go all the way back to Aristotle, and the Roman naturalist Pliny the Elder offers a reasonably accurate description of a giant squid in Natural History. In what has to be a first for ancient writers, Pliny actually manages to underestimate the size of the beast, saying it’s only about thirty feet long. The giant squid also might be the inspiration for any number of mythological monsters, including the Kraken of Norse mythology, the Scylla of Greek mythology, and the Lusca of Caribbean folklore.

The problem with the giant (and colossal) squid is that the ocean is a very big place, and they don’t generally hang out near the surface, which is where humans tend to be (what with all the oxygen). That automatically limits how much humans could know about the creatures, and early zoologists were faced with the unenviable task of distinguishing legitimate reports from wild tales of sea serpents and monsters from the deep. Squid specimens would sometimes wash ashore, but these were rarely complete carcasses, and they tended to rot so quickly that it was difficult to say anything about them with certainty.

In fact, several early squid carcasses were interpreted not as beasts at all, but rather as mermen. In a context like that, where science and superstition so freely intermixed, it’s not hard to understand why the squid remained mysterious for so long. The first confirmed discovery of a giant squid carcass came in the 1870s, but it wouldn’t be until the past decade that zoologists were able to take photos of a live specimen.

The Trouble With Real Cryptids

There are plenty of other now famous animals that began as cryptids. The komodo dragon of Borneo was not accepted by the European zoological community until 1910, while the mountain gorilla remained unknown until two of them were shot in 1902. Both of these species come from highly isolated areas – one of the mountain gorilla’s natural habitats is actually called the Bwindi Impenetrable Forest – and their discoveries probably share credit for inspiring pop culture’s most famous depiction of cryptozoology, King Kong.

If we examine these case of real cryptids, a few patterns emerge. These are all creatures that live in extremely isolated parts of the world. These are generally areas that don’t just discourage human exploration, but almost make the task fundamentally impossible, like the ocean depths or extremely dense forests. Most of these are either solitary creatures or otherwise display behaviors that make them naturally averse to interacting with humans. While more fantastical cryptids like the Loch Ness Monster or Bigfoot are generally said to be solitary – there’s really no way around that, since we’ve never seen them – they are supposedly located in fairly well-explored, well-understood areas that would not be able to support a large, undiscovered species.

I hesitate to say that we will never discover any more cryptids on the scale of the giant squid or the okapi, but we’re fast running out of places to look. The ocean may well have some reasonably large species that remain undiscovered, but they’re likely to be more along the lines of the four foot long coelacanth than the forty foot long giant squid.

Still, all these animals are an important reminder that tons of species begin as the stuff of cryptozoology before passing into the official ranks of zoology. Unless you restrict your definition of cryptozoology to only include the pseudoscientific search for the Yeti or Bigfoot – which we would argue is a pointlessly narrow definition – then what cryptozoology really deals with are animals who are known only through anecdotal evidence and rumored sightings. As all these creatures demonstrate, there are plenty of animals for which the legends were absolutely true.

Platypus: the extraordinary story of how a curious creature baffled the world by Ann Moyal
“More on the mainstreamification of cryptozoology: former cryptids and hypothetical cryptids” by Darren Naish
A Gallery of Cryptozoological Alumni

This summer, io9 is going cryptozoological. We’re offering a $2000 bounty to the person who sends us the best authentic photo or video of a “cryptid,” or mystery animal. And that’s just the beginning of Cryptid Summer. More »