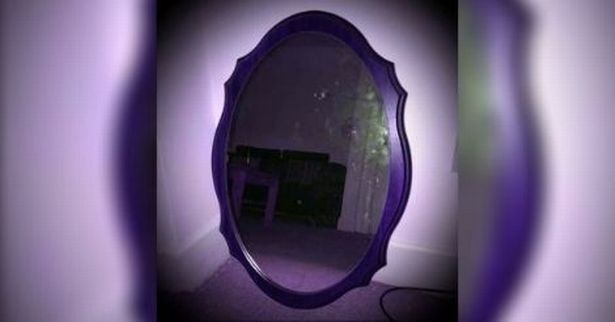 A ghostly child’s voice can be heard calling out for help from a supposedly haunted mirror in a spooky video, it has been claimed.

Swadlincote psychic medium Ian Griffiths, of Walking with Spirit Paranormal, says even he has been left on edge after he claims he managed to capture the image and voice of what he believes to be a young girl haunting a mirror.

Mr Griffiths purchased the mirror from an antiques shop in Hinckley, Leicestershire, just before lockdown and was immediately struck by its ‘ghostly presence’.

Using his expert equipment, Mr Griffiths recorded an electronic voice phenomena (EVP) on an electronic recording he made, he says.

He filmed his experience and says “unexplained rattling” can be heard in his home, where he lives alone, that he has never heard before.

Following a live recording he later made, he believes he can see the ghostly presence in the mirror.

Mr Griffiths later told Staffordshire Live: “I brought a mirror that was haunted from a shop in Hinckley.

“I have had some amazing things from it such as EVPs but I had these screen shots sent me from my live recording. These are photos of the spirit child from the mirror. I live alone and no children were here.

“I got it from an antique shop in Hinckley few months ago.

“The child’s name is Alison Marie.

I got her name psychically but got Alison Maria but think she corrected me as she told me the name Alison Marie when I asked out for her on that night.

Did you know you can get StaffordshireLive via email?

We offer a free email newsletter service so you can get the latest stories from across Staffordshire straight to your inbox.

Each StaffordshireLive newsletter bulletin will contain the top latest news stories from places like Burton, Stafford, Uttoxeter and beyond. There will be the latest breaking news, what’s on events and the hottest talking points straight to your email – and it’s easy and quick to sign up . To subscribe, click here.

Decide later that you no longer wish to receive the emails? No problem – you can just follow the unsubscribe link.

“It was definitely spooky at the time. I have done this for nearly 20 and this is the only thing that puts me on edge.”