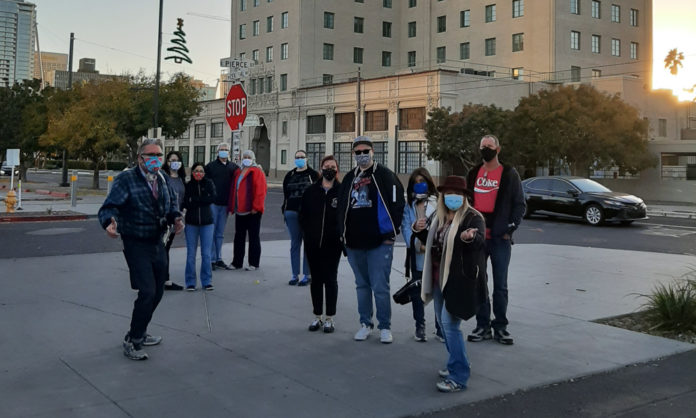 A sunset walk through downtown Phoenix has never been spookier or more educational than when it is taken with Marshall Shore and his co-host, Debe Branning, on their monthly haunted walking tour.

The next available tour on Saturday, April 10 at 6 p.m., will mark seven months since the pair began ushering guests on a two-hour, two-mile excursion to the paranormal side of the city.

Shore, also known as Arizona’s Hip Historian, has been educating the public on the lesser-known side of the Grand Canyon State’s history since its 100th anniversary of statehood in 2012.

“The history I talk about is stuff you won’t necessarily read in a textbook or get in a history class,” Shore said. “I really like to focus on kind of the weird, quirky and obscure history. We’ve done everything from haunted history to LGBTQ+ history, I try to leave no stone unturned.”

His partner, Branning, is the director of MVD Ghostchasers and author of multiple books on Arizona’s ghostly locations such as the state’s historic diners, hotels and graveyards.
Branning had worked at the Motor Vehicle Department for 25 years when the film ‘Ghostbusters’ was released and reignited both Branning and her coworkers’ passion for the paranormal.

“We all did it on the weekend to get away from the hustle and bustle of the MVD office, we would go to haunted hotels and stay there. Then we would go back, tell people what happened and gradually got more people interested in the paranormal aspects of these places,” Branning said.

Branning retired in 2003 to focus on writing books and conducting investigations on mysterious phenomena around the valley.

The idea for such a tour was born while Shore was brainstorming ways to drive tourists and locals to overlooked Phoenix landmarks, like the pioneer cemetery, which he was promoting at the time.

Shore and Branning soon began tours on a yellow school bus eight years ago, using their combined experience in all things history and hauntings to provide “what I like to call ‘edutainment,’” Shore said. “People are having so much fun they don’t realize they’re learning.”

Branning, the author of nine novels on Arizona’s rich history has been dedicated to telling the stories of the state’s curious past since 2004.

“I love the history of Arizona and I love the mystery of Arizona. I always tell people it kind of goes hand in hand,” Branning said.

Following the severity of COVID-19 across the state, they adapted the tour to be an on-foot experience to allow for social distancing, facial masks and smaller groups while continuing to provide commentary through the use of microphones beneath their masks.

Now, for the price of $30 per person, the pair takes groups of ten on a stroll to the most eerie local haunts such as the Hotel San Carlos, the Orpheum Theater, the Masonic Temple among many other spots, Branning said.

When asked about his favorite parts of conducting these tours, Shore said, “one thing I really like is that we’ve had people who are just visiting Phoenix and we’ve had folks that are fifth-generation Phoenicians, and they’re both learning stuff for the first time.”

Shore said teaching community members about the history of these vintage landmarks, while walking through the heart of the city also provides a unique perspective.

“It’s so much fun because you can actually reach out and touch these buildings as opposed to just zipping by so there’s more time to process or be more aware of your surroundings,” Shore said. “I mean, as we walk around mostly talking about buildings from the ’20s and ’30s, you see all these cranes building larger new buildings.”

By combining legends about these locations such as the ‘woman in white’ of the San Carlos or the ghost of a little girl in the Orpheum with personal stories and investigation details, the co-hosts are able to create a truly unforgettable experience for tour-takers.