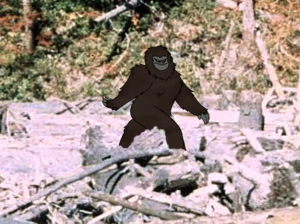 However, seeing as we are in the last entry in the series, I think it’s about time we covered the only topic suitable for the finale.

Sometimes referred to as Sasquatch, Bigfoot is perhaps the most well-known cryptid with different iterations of the creature being reported all across the world.

A large, ape-like humanoid, Bigfoot is said to stand around 6-9 feet tall, covered with dark brown, black, red or even white fur.

Bigfoot received its imaginative name based on the size of the footprints it is said to leave behind, with the first documented footprints being 16 inches in length, equaling about a men’s 26 size shoe in the United States.

The creature’s other famous name, Sasquatch, came from government worker J.W. Burns in the early 1930s. Burns worked as an Indian agent, a member of the government that would interact with local Indigenous tribes on behalf of the United States.

Burns worked with the Sts’ails First Nation who told stories of the sasq’ets or “wild men” that lived in the forest. Burns later Anglicized the words in his documentation of interactions, coining the term Sasquatch which would later become a popular name for the creature in the Pacific Northwest.

One of the earliest known documentations in North America was the story of Jacko, a gorilla-boy, that was published in the British Columbia newspaper, the Daily Colonist in 1884. While the original story reports the boy who was found passed out near a railroad worksite seemed to be a gorilla, the story became sensationalized and evolved into reports of a captured child Sasquatch.

However, the story of Jacko seemed to vanish into think air just as quickly as it came, with no record as to what happened to the supposed child.

The story of Bigfoot didn’t reach its true height in the West until the 1960s, when the infamous Patterson-Gimlin film was released to the public.

Shot by self-proclaimed Bigfoot hunter Roger Patterson and his associate Robert Gimlin, the Patterson-Gimlin video was shot on 16mm film and appears to show a large, bipedal ape-like creature walking away from the two men.

The film was reportedly shot near Bluff Creek, California while the two men were riding on horseback, coincidentally filming stock footage for a documentary Patterson was making on the subject of Bigfoot.

The authenticity of the Patterson-Gimlin footage is a highly debated topic in the world of cryptozoology and is a rabbit hole in and of itself that I will spare you the pain of diving into for now.

While arguably most popular in North America, Bigfoot isn’t exclusive to the region by any means.

There are dozens of different iterations of the same ape-like humanoid figures reported to be seen all over the world.

If you’ll recall from the Quinkan piece from 2020, the story of the Quinkan was often conflated with the Yowie, a sort of Australian equivalent to Sasquatch.

The Yowie was initially part of Aboriginal Australian legends, a tribe of wild men in the woods that loomed as larger-than-life figures over the native peoples of Australia.

Of course, the Yowie isn’t the only example of a similar legend in a different region.

The Chinese Yeren, the Mongolian Almas, the Orang Pandek of Indonesia, the Woodwosa of Canterbury, England, and of course, the Meh-Teh or Yeti of the Himalayas are just a few of the variants reported across the planet.

Even in the United States, there are different names and variations such as the Florida Skunk Ape, the Fouke Monster of Arkansas or the Ohio Grassman.

Now, with so many sightings and reports of such creatures spanning centuries across the globe, there’s surely an explanation to the phenomenon, right? 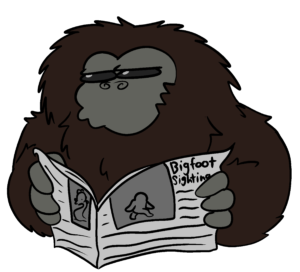 For one, the topic of cryptozoology is shied away from in most scientific corners to begin with. Yet, even those who do conduct research and investigate the topic still have no clear explanation for most, if not all, of the sightings.

One of the most prominent theories is that, if there are wild ape-like hominids living in the world’s forests, they would more than likely be some sort of ancient ancestor of human beings such as Paranthropus, Homo Erectus or even Neanderthals.

But even with theories such as these, there is so little evidence leaning toward the existence of these creatures.

No one has ever found a true carcass of a Bigfoot before. Sure, there have been dozens, if not hundreds of hoaxes, over the years, but no one has ever found the carcass of such a creature just laying in the wild. Some believers say this is because the creatures practice burial rituals and care for their dead, but what about the regions where there is only one creature reported rather than a tribe?

Since many Bigfoot variants, minus the Yeti, exist in warm weather climates, some cryptozoologists hypothesize that perhaps their bodies decay at a rapid pace and avoid fossilization.

Some theorists claim that Bigfoot may be an alien species that visit Earth as many sighting locations coincide with areas where UFOs have been reported.

Of course, like everything else covered in this series, mere conjecture and critical thinking is all that can really be applied to the situation.

Could there be a species of undiscovered hominids living throughout the Earth’s forests?

Does it truly matter whether we ever prove or disprove the existence of the world’s cryptids?

What I do know is this, though.

Imagination and the willingness to observe and examine the oddities of the world around us is important. We broaden our outlook to other cultures and gain new perspectives, learn about the tales passed down through generations and continuously tease our brain with that one little question, “What if…?”