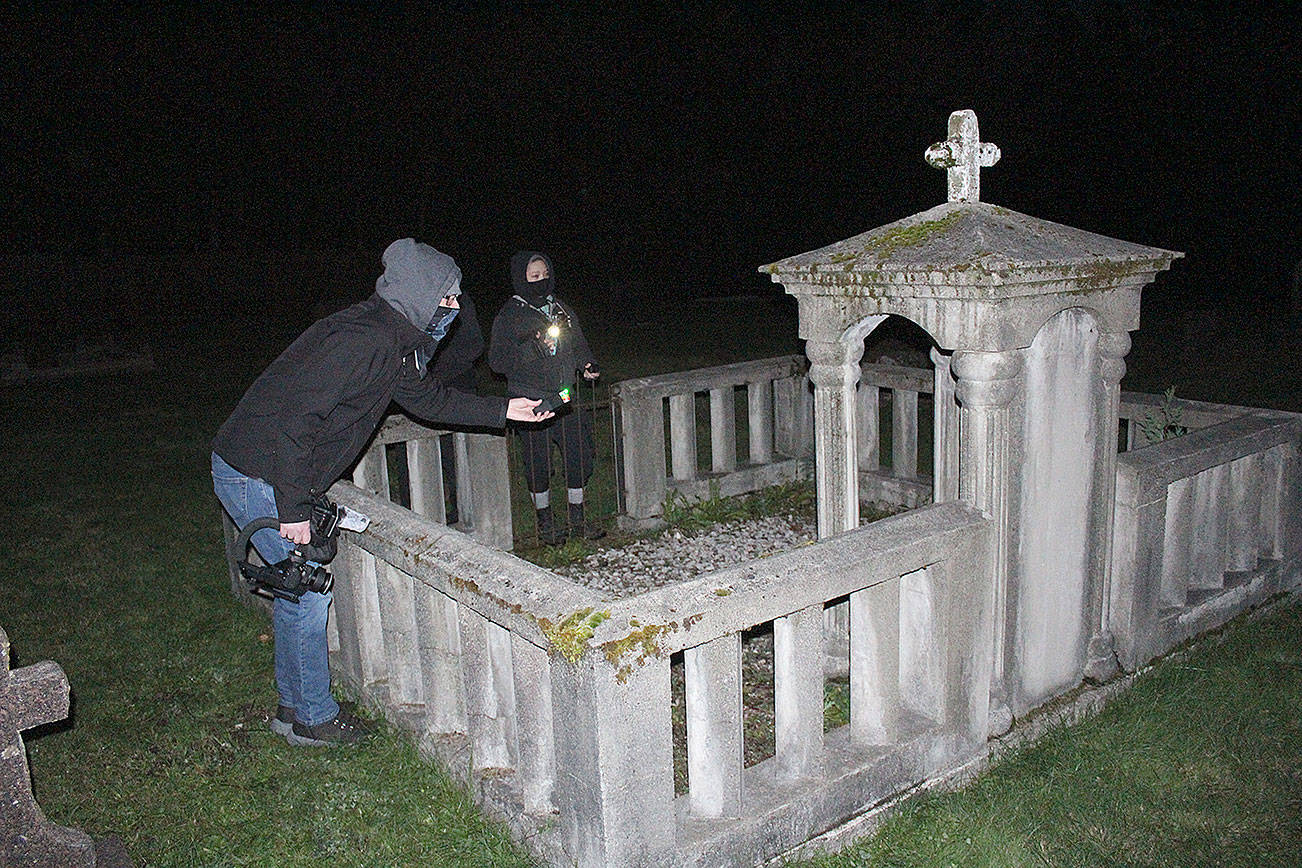 For the most part, Cascadia Paranormal Investigations only experienced clear skies and the biting cold during their investigation of the Black Diamond Cemetery.

But the fledgling paranormal group didn’t exactly walk away empty-handed, and there were a couple of incidents they couldn’t readily explain.

Headed by Kyle Richmond, CPI was on the Plateau on Oct. 24 to check out the Black Diamond Cemetery, since a surprising number of websites claim the cemetery is one of Washington’s top haunted places.

“It has been said that visitors have heard whistling and voices when nobody else is around,” reads Haunted Rooms America’s website, just one of the many that repeat similar claims. “There have also been reports of the swinging lanterns of dead coal miners seen on foggy nights.”

CPI didn’t hear any whistling or see any phantom lights — in fact, the group believes they likely debunked some of the paranormal claims that have been made in the past.

“If people are taking flash pictures, anything else like that, the way the light refracts off of the tombstones — especially if they’re marble and shiny — can cause orbs to appear in photos,” Richmond said, referring to the eerie shapes that sometimes appear to seekers of the spooky. “Same with dust particles if it’s very windy; any light that refracts off that dust and debris in the air, that can cause orbs.”

Less easy to explain, though, is how two members of the group appear to have had an apparition respond to their questions through a controversial ghost hunting tool, the spirit box.

In short, the spirit box quickly flips through radio channels, which in theory could allow a spirit to talk to anyone present.

“There were some questions that Natalya was asking, and I don’t want to say it’s really, really clear — the audio, the microphone recorded all the wind and the spirit box static itself — but it sounded like there was a question asked, ‘Is anyone here?’… and there was a response as it’s rifling through the channels, ‘it’s me,’” Richmond said.

That’s certainly far from concrete evidence, Richmond continued, adding that even though the spirit box wasn’t picking up any radio chatter, it could have just been a coincidence that there was any response.

“When it comes to the paranormal, you can’t make any snap judgement calls about a situation or an area without really thoroughly being able to grab the data,” Richmond said. “It doesn’t mean that there’s not something there, but at the same time, I can’t say, ‘oh yeah, for sure, Black Diamond is haunted.’”

CPI also got a hit on another one of their devices, the Ovilus.

According to Richmond, this device “takes and reads the fluctuations in EMF detections and puts it to a sound bank, and it will recite words… the Ovilus has a language bank of over 8,000 words that if a spirit can potentially manipulate the device and create words, [it can] speak them through the Ovilus.”

The Ovilus was quiet until the host of the Maple Valley Alley Kat Chat radio program, Heidi Yoast, came onto the scene to do their own show at the cemetery.

“We were getting really weird things… some really violent words that were popping up,” Richmond said, adding that words like “homicide” and “riverbank” were heard through the device. “There was definitely a lot of activity — words being spit out, quite a bit, so there was some sort of energy that was in the area that the Ovilus was picking up on and utilizing.”

Yoast said the words reminded her of Kent man Nicholas Germer, who was killed June 18, 2020, along the Cedar River; the Alley Kat Chat program had done a show about Germer’s murder in late August.

Yoast and her crew stayed behind after CPI eventually wrapped up their investigation, and said they also had some strange activity happen, including photographing some orbs and even seeing a ghostly figure.

So all in all, it was a quiet night, Richmond said, but he and his group would love to follow up on a later date.

“We would definitely love to go back and have multiple chances to see if we do catch anything,” he said.

You can learn more about CPI on their Facebook page at www.facebook.com/cascadiaparanormal/. or watch their investigation recap at their YouTube page.

To share your opinion for publication, submit a letter through our website https://www.courierherald.com/submit-letter/. Include your name, address and daytime phone number. (We’ll only publish your name and hometown.) Please keep letters to 500 words or less.